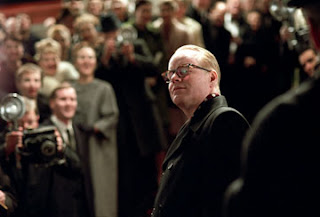 Based on Gerald Clarke’s biography on Truman Capote, Capote is the story of famed novelist interviewing the men that would inspire his acclaimed novel In Cold Blood. Directed by Bennett Miller and screenplay by Dan Futterman, the film explores Capote’s life into the making of the book as well as his unique personality as the role is played by Philip Seymour Hoffman. Also starring Catherine Keener, Clifton Collins Jr., Bruce Greenwood, Mark Pellegrino, Amy Ryan, and Chris Cooper. Capote is an intriguing yet hypnotic film from Bennett Miller.

After reading the news about a murder in Kansas, Truman Capote is intrigued by the story as he travels to the murder site with friend/fellow author Harper Lee (Catherine Keener) for an article about what happened. After interviewing various locals including enforcement chief Alvin Dewey (Chris Cooper) about what might’ve happened as Capote thinks there’s a whole lot more to it. During a dinner with Alvin and his wife (Amy Ryan), news emerged that the killers have been caught as they’re revealed to be Richard Hickock (Mark Pellegrino) and Perry Smith (Clifton Collins Jr.). Capote wants to get to know the killers as he tells his editor William Shawn (Bob Balaban) and novelist/lover Jack Dunphy (Bruce Greenwood) that he wants to do more research about what happened for a book.

Capote gets to know the prisoners as he becomes very attached to Smith as the two share their own experiences where Smith even lends Capote his diary. With Capote using everything he knew from Smith to write his book, he goes to Spain with Dunphy for a year as he waits for news about their appeal. When their appeal is rejected, Capote returns to the U.S. to meet with Smith as he still wants to know what happened that night. Smith eventually tells him while Capote struggles to finish the book despite reading passages to the public some time earlier. With the execution for Smith and Hickock looming and Capote feeling very attached towards Smith, Capote deals with everything he’s experienced as he awaits for the execution of the two killers.

The film is about a period in Capote’s life from the moment he reads about this incident in Kansas that would lead him to write the novel of his career. Yet, there’s a lot more to it in the way Capote presents himself to people when he’s having fun as an openly-gay man while being the serious writer when he’s on the job. What happens in the course of the film is that his research into creating this book would eventually take a toll on him as he becomes attached to one of the killers realizing that they’re just human beings despite their action.

Dan Futterman’s script delves into a Capote’s personality and his persona while making him into a very complex individual that is trying to make a story that humanizes the killers he’s interviewing. Futterman also succeeds in making Capote flawed as he would often lie to Perry Smith about the progress of his book in order to try and get to know him. Other characters such as Smith, Harper Lee, Jack Dunphy, and Alvin Dewey are just as interesting in the way the react to or interact with Capote. Notably Smith as he’s this quiet yet troubled man that is trying to find some form of redemption as he befriends Capote. Futterman’s script succeeds in laying out the events that happens as well as Capote’s research though the story starts to drag a bit towards the third act. Largely because there’s an uncertainty to the way Capote is feeling about the execution as he is waiting for it to happen. Still, Futterman manages to create a script that is compelling and insightful.

Bennett Miller’s direction is truly a marvel to watch from the way he opens the film quietly with this scene of a young woman walking into a house where she would find a dead body. That sense of steady compositions mixed with silence is a great example of what Miller could do as he maintains a very simple yet direct approach to the film. Often having the camera moving slowly or to just shoot something in a very simple presentation. Miller’s direction is very potent as he also can create an atmosphere to the locations that is set in the film whether it’s the Canadian locations as Kansas or other scenes shot in California and Austin, Texas. There is a truly a mesmerizing feel to the film as Miller creates what is truly a fascinating portrait of one of the great writers of the 20th Century.

Cinematographer Adam Kimmel does a brilliant job with the film‘s entrancing photography from the low-key yet colorful nighttime shots for the interior scenes in New York along with some gorgeous yet hypnotic daytime shots for a lot of the Kansas scenes with very little sunlight. Kimmel’s photography in a lot of the daytime scenes has an exquisite beauty that is truly reminiscent of the films made by Terrence Malick as it’s the true technical highlight of the film. Editor Christopher Tellefsen does a superb job with the editing in maintaining a methodical pace throughout the film, despite the slowness of the third act, while utilizing rhythmic cuts and fade-outs to help keep the film going.

Production designer Jess Gonchor, along with art director Gord Peterson and set decorators Maryam Decter and Scott Rossell, does an excellent job with the set pieces created such as the jail cell that Smith lives in as well as the posh Spanish home that Dunphy lives where Capote does some of his writing. Costume designer Kasia Walicka-Maimone does a wonderful job with the costumes created from the suits and clothes that Capote wears to the late-50s/early 60s dresses that some of the women wear in the film. Sound editor Ron Bochar does a great job with the sound from the sparseness of the open field Kansas location to the raucous atmosphere of the New York parties that Capote frequently attends to.

The film’s plaintive, piano-driven score by Mychael Danna is truly mesmerizing from the mood that Danna creates to underplay the drama and the horror that surrounds the events as it features a low-key string orchestra to add a heaviness to the music. Music supervisor Susan Jacobs creates a soundtrack filled with playful jazz and bossa nova music to complement the world of NYC that Capote lives in as it’s definitely fun to hear.

The casting by Avy Kaufman is amazing as it features a wonderful collective of actors needed for a film like this. In small but notable roles, there’s Allie Mickelson as the young woman who found the bodies at the start of the film, Marshall Bell as the prison warden, Amy Ryan as Alvin Dewey’s wife, Bob Balaban as Capote’s editor William Shawn, and Mark Pellegrino as convicted killer Richard Hickock. Chris Cooper is excellent in a small but memorable role as local law enforcer Alvin Dewey who reluctantly helps out Capote in his research. Bruce Greenwood is terrific as Capote’s lover/fellow novelist who tries to deal with Capote’s research while being there for him as he writes his own novel.

Clifton Collins Jr. is superb as Perry Smith as Collins brings a sensitivity to his performance that is also chilling as a man who is aware of his crimes as he yearns for redemption. Catherine Keener is great as novelist Harper Lee who helps Capote in his research while being the one confidant he can count on. Finally, there’s Philip Seymour Hoffman in a fantastic performance as Truman Capote as Hoffman brings a wonderful sense of charm to the novelist in the way he presents himself publicly. In more somber moments, Hoffman restrains himself in the way he does his research while dealing with his own attachment towards Smith as it’s a truly outstanding performance from Philip Seymour Hoffman.

Capote is phenomenal film from Bennett Miller that features a magnificent performance from Philip Seymour Hoffman as the famed author. The film is a mesmerizing portrait of Truman Capote’s life during the writing of his famed novel In Cold Blood and the toll it took on him as a writer. The film is also a very rich and divine for its imagery while it’s a drama that is very engaging in the way it’s presented. In the end, Capote is brilliant film from Bennett Miller.

I thought that the film didn't really do much to keep me involved, although I do have to say that Hoffman was amazing in this role and definitely deserved the Oscar that year. Glad to see Bennett Miller back too this year. Great review Steve.

I was really into it throughout though it start to lose me a bit in the third act. I really think it's an awesome and Hoffman's performance was indeed deserving of the Oscar.