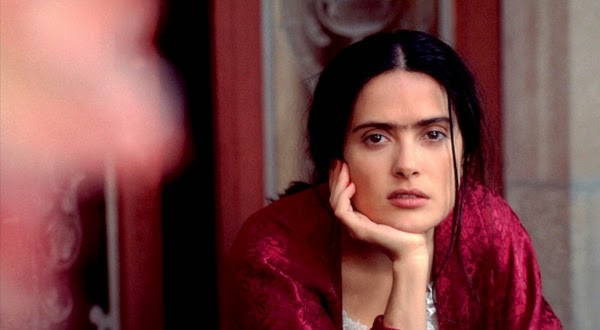 Based on the biography Frida: A Biography of Frida Kahlo by Hayden Herrera, Frida is a story about life of the surrealist Mexican painter and her relationship with the painter Diego Rivera that would span for many years through ups and downs. Directed by Julie Taymor and screenplay by Clancy Sigal, Diane Lake, Gregory Nava, and Anna Thomas, the film is an unconventional take on Kahlo’s life from the accident she suffered at the 18 that would plague her for the rest of her life to the people she would meet in her lifetime. Playing Kahlo is Salma Hayek while Alfred Molina would play her husband in Diego Rivera. Also starring Geoffrey Rush, Valeria Golino, Ashley Judd, Mia Maestro, Roger Rees, Diego Luna, Edward Norton, and Antonio Banderas. Frida is a lavish yet extraordinary film from Julie Taymor.

The film is an offbeat and surrealistic telling of the life of Frida Kahlo from the year she would be severely injured from a bus accident in 1922 that would plague her for the rest of her life to her final year of her life in 1954. During this time, she would meet the mural artist Diego Rivera whom she would be married to in 1929 and later remarry in 1940 after a one-year divorce where their marriage was a dysfunctional one due to his flings with other women and her bisexuality. It’s a film that plays more into the art of Kahlo and the events of her life that would drive her art as she would be appreciated as well as reviled for her art as well as views on politics due to her affiliation with Marxism as she would meet and have an affair with Leon Trotsky (Geoffrey Rush).

Since Kahlo’s life was never a conventional one, a straight-forward bio-pic on the artist wouldn’t work as there’s so much to cover as the film’s screenplay sort of deviates from that schematics to play into moments of her life and relationship with Rivera. The first act of the story plays into the accident and Kahlo’s meeting with Rivera whom he would take Kahlo as a protégé only to become his new lover and wife in 1929. Yet, their relationship is a complicated one since Kahlo knows that Rivera likes to sleep with other women which Kahlo does begrudgingly accept since she is also promiscuous. Still, it would eventually cause trouble along with their own political affiliation with Marxism is put to the test in the film’s second act when Rivera is asked by Nelson Rockefeller (Edward Norton) to paint a mural at the Rockefeller Center which would get destroyed due to Rivera’s anti-capitalist views. A move that would leave Rivera returning to Mexico with his pride and ego wounded as his actions would cause a schism between him and Kahlo.

Despite all of the trials and tribulations that Kahlo and Rivera has, the latter is still loyal to the former despite his actions as he would support her from afar just as she would gain fame of her own. It plays into what Kahlo wants as an artist but all of the trappings of fame becomes fleeting where she later gets in trouble over her encounters with Trotsky which would prompt Rivera to come back to her life. Especially as her health would decline in the film’s third act where Rivera is willing to do whatever to get her back and be there for her.

Julie Taymor’s direction definitely plays to much of the surrealistic images that Kahlo creates in her paintings where it is filled with a sense of style as well as an extravagance that is off the wall. Especially as Taymor is playing to a sense of style which feels true to the world that Khalo lives in as she would shoot the film on location in Mexico in order to make the country as a character in the film that would influence Kahlo’s own work. Some of the paintings in the film that are Kahlo’s or re-creation of Kahlo’s work help tell the story into the events that would shape her life including own injury and her marriage as it’s expressed through her own art. Most notably the sequence of the bus accident that would be the cause of Kahlo’s life-suffering injury as it’s presented with an air of style from where the camera is at and the impact of its crash where it mirrors the painting that Kahlo would make later on in her life.

The direction also includes some unique elements of surrealism and humor such as a sequences where Kahlo and Rivera would each play into their own vices as well as the former’s interpretation of the latter’s taste for fame which includes a scene where she imagines Rivera as King Kong. Much of the direction includes some unique compositions in the simple and intimate moments where Taymor knows where to frame Kahlo as if she is recreating one of Kahlo’s paintings where its usage of close-ups and medium shots add to that sense of style. Even the use of wide shots in the scenes at Tenochtitlan at the pyramids where Kahlo shows Trotsky the sites as it displays Mexico at its most beautiful. Even in how Kahlo would view the country as her home which is exactly who she is no matter all of the riches and acclaim she would receive everywhere else. Overall, Taymor creates a very majestic and rapturous film about the life of one of the greatest painters in the 20th Century.

Cinematographer Rodrigo Prieto does amazing work with the film‘s dazzling and colorful cinematography for many of the film‘s exterior settings in the day while using some unique dark shadings and lighting schemes for some of the film‘s daytime and nighttime interior scenes. Editor Francoise Bonnot does fantastic work with the editing as it‘s very stylish with its usage of jump-cuts, montages, and dissolves as it plays into the frenetic energy of Kahlo‘s art as well as in some of the dramatic moments in the film. Production designer Felipe Fernandez del Paso, with set decorator Hania Robledo and art director Bernardo Trujillo, does brilliant work with the look of the Kahlo family home where Frida lived with her family as well as the Rivera studio and other places in Mexico as well as the look of the New York City apartment where Rivera and Kahlo lived during Rivera‘s period working for Rockefeller.

Costume designer Julie Weiss does excellent work with the costumes to play into the look of the times as well as the clothes that Rivera wore as well as the dresses and suits that Kahlo would wear. Makeup artist Judy Chin and hairstylist Beatrice De Alba, with prosthetic makeup designer John E. Jackson, do incredible work with the makeup from the look of the unibrow of Kahlo‘s face as well as into the aging makeup of the characters throughout the years. Visual effects supervisors Jeremy Dawson and Dan Schrecker do superb work with the visual effects to play into the surreal look of Kahlo‘s paintings as they would come to life along with some strange sequences including a hospital scene that is full of macabre animation by Stephen and Timothy Quay. Sound designer Blake Leyh does terrific work with the film‘s sound to play into the atmosphere of some of the locations including the very chilling moment in the bus accident scene. The film’s music by Elliot Goldenthal is wonderful for its mixture of lush orchestral music with traditional Mexican music to play into the drama of the film while music supervisors Sarah Botstein and Kathy Nelson bring in a soundtrack filled with jazz and traditional Mexican music of those times.

The film’s marvelous cast includes some notable small appearances from Saffron Burrows as a British woman Kahlo seduces in New York City, Lila Downs as a tango singer at a party, Omar Rodriguez-Lopez as the surrealist Andre Breton, Diego Luna as a schoolmate of the young Kahlo in Alex, Patricia Reyes Spindola as Kahlo’s mother, and Valeria Golino as Rivera’s second wife Lupe Marin whom Kahlo would befriend and paint a portrait of her. Antonio Banderas is terrific in a small role as the artist David Alfaro Siqueiros whom Rivera would argue with over politics while Ashley Judd is wonderful as the Italian photographer/artist Tina Modotti. Roger Rees is superb as Kahlo’s father Guillermo is also an artist as he copes with the injury that his daughter suffered while encouraging her to become an artist. Mia Maestro is excellent as Kahlo’s loyal sister Cristina who would later become Rivera’s assistant as it would later cause trouble.

Edward Norton is fantastic as Nelson Rockefeller who asks Rivera to make a mural at the Rockefeller Center until he sees whom Rivera would put in the mural. Geoffrey Rush is brilliant as Leon Trotsky as the Marxist revolutionary who is granted political asylum in Mexico as he befriends Rivera and Kahlo while having an affair with Kahlo. Alfred Molina is amazing as Diego Rivera as this mural painter who is large both in look and in personality as he’s an artist that is big on ideas while displaying Marxist ideals to help the people yet is a total contradiction since he also likes to party with the rich and famous as Molina showcases a man that is flawed yet full of charm and humility. Finally, there’s Salma Hayek in an incredible performance as the titular character as she displays not just charm but also a person that is willing to make a name for herself on her own terms while displaying a sense of individuality as it’s definitely Hayek at her most lively in terms of humor and drama.

Frida is a phenomenal film from Julie Taymor that features a remarkable performance from Salma Hayek in the titular role. Along with a very strong supporting performance from Alfred Molina as well as a great look and an offbeat yet engaging script. It’s a film that doesn’t just tell the story of a great artist but also a person who deals with all of the trappings of fame as she is willing to not make compromises on who she is or where she came from. In the end, Frida is a dazzling film from Julie Taymor.

Salma Hayek is ridiculously good in this film. It's a pretty amazing performance in a wonderful movie.

Totally. She is total proof that she is an actress and a damn good one. I wish she would get more opportunities to do that rather than be degraded in those awful Adam Sandler trash movies.

I have always avoided this because I had a feeling it would be...bad. Now I feel a strong need to see it!

@Fisti-It's pretty extravagant yet it's so lively and full of wonderment. In the hands of a lesser director, it would've been boring. Plus, there was supposed to be a version where J-Lo was to play Kahlo. It would've been awful because J-Lo sucks.

I've been wanting to check this one for ages just to see Salma's performance as Frida. I didn't realize it has such a tremendous supporting cast as well.

@ruth-That's one of the highlights of the film is the supporting cast. They just make it so much better than it needs to be and actually help the story.