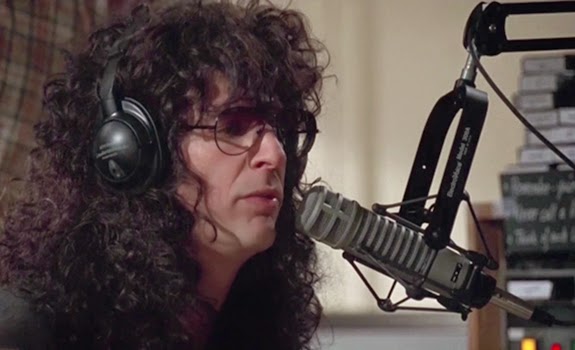 Based on the book by Howard Stern, Private Parts is the story of shock-jock radio personality Howard Stern and his metaphoric rise into becoming the king of American radio through his controversial antics and no-holds-barred attitude. Directed by Betty Thomas and screenplay by Len Blum and Michael Kalesinko, the film is a dramatized take on Stern’s life from his early days trying to make it in radio to his success in being outlandish as he would spar with bosses from NBC. At the same time, the film explores Stern’s first marriage to Alison whom he was devoted to as Stern plays himself as associates such as Robin Quivers, Fred Norris, Jackie Martling, and Gary Dell’Abate also play themselves. Also starring Mary McCormack, Carol Alt, Michael Murphy, Allison Janney, and Paul Giamatti. Private Parts is a very raunchy yet hilarious film from Betty Thomas.

The film is dramatization into the life of Howard Stern as it’s told by the man himself as he deals with his success but also the radio personality that he created that has polarized people. A personality that isn’t afraid to speak his mind as well as not be afraid to be offensive and crass as he would tell his story on a flight home after the 1992 MTV Video Music Awards where he introduces his Fartman character to the delight of audiences but the disgust of celebrities. The film’s narrative is sort of a reflective one as it’s told by Stern from his childhood where he struggled to find a voice as he’s often told to shut by his father Ben (Richard Portnow) as well as trying to get laid where he would eventually meet his first wife Alison (Mary McCormack). After some early struggles and setbacks, Stern would eventually find his voice with the help of comedian/sound effects man Fred Norris and news anchor Robin Quivers who would help make him successful. It’s a film that really plays into a man trying to find himself and unleash all of his frustrations into a personality he would create for radio.

The film’s screenplay sort of moves back and forth with comments from Alison and Robin Quivers while there’s also moments that involve Stern’s longtime producer Gary Dell’Abate to help structure the story with some of Stern’s other strange guests to introduce some chapters into his life. Its first half plays into Stern’s childhood as well as his insecurities as a teenager as well as meeting Alison and Fred Norris as the latter would help hone Stern’s act through sound effects and material. The second half introduce Quivers to the story where she would become Stern’s voice of reason as well as reveal the kind of things Stern would say on the air including aspects of his personal life much to Alison’s dismay. Its third act would have Stern, Alison, Quivers, and Norris move to New York City to be part of WNBC where Stern would spar with his new bosses including Kenny Rushton (Paul Giamatti) whom Stern would refer to him as “Pig Vomit” on the show. All of which plays into Stern’s refusal to defy the censors to say what he needs to say.

Betty Thomas’ direction is very simple in the way she plays into Stern’s life where there’s moments that the fourth wall is broken such as the first scene of Stern as a college student where Stern himself is playing his old college version. It adds to the offbeat quality of the film as Quivers and Norris are also playing younger versions of themselves as much of the story is set in the late 1970s and early 1980s. Many of the compositions are simple as Thomas is more concerned with laying out the comedy while keeping the crassness to a minimum. Still, there’s elements of shock and low-brow antics that do keep things lively including scenes of Pig Vomit running through the halls during Stern’s broadcast. There’s also moments of style in a few slanted angles to play into Stern’s attempt to win over the suits at WNBC. The usage of tracking shots in the office scenes help play into the tension where it’s about Stern trying to not make any compromises and the people at WNBC trying to get rid of him. Overall, Thomas creates a very captivating and entertaining film about the life of Howard Stern.

Cinematographer Walt Lloyd does excellent work with the film‘s cinematography with some low-key lighting schemes for some of the film‘s nighttime interior scenes while it‘s mostly straightforward in its day and nighttime scenes. Editor Peter Teschner does superb work with the editing as it‘s straightforward while it features a few montages as well as a few jump-cuts to play into the film‘s humor. Production designer Charles Rosen, with set decorator Beth Kushnick and art director Rick Butler, does fantastic work with the look of the WNBC offices and studio as well as the different radio stations Stern would work for.

Costume designer Joseph G. Aulisi does terrific work with the costumes to play into the different look of the characters from the 1970s to the 1980s. Hair designer Colleen Callaghan does brilliant work with the design of Stern‘s different hairstyle throughout the years as well as Quivers‘ hair style during those early years with Stern. Sound editor John Dunn does work with the sound from the way Fred Norris creates his sound effects to some of the moments that play out on the radio and with the crowds. Music supervisor Peter Afterman does an amazing job in creating a soundtrack filled with a lot of rock music from the Cars, Van Halen, David Bowie, Marilyn Manson, Stern with the Dust Brothers, Rob Zombie, Porno for Pyros, Deep Purple, Green Day, the Ramones, Cheap Trick, Ted Nugent, and AC/DC who makes a special appearance in the film.

The casting by Olivia Harris and Phyllis Huffman is incredible as it features cameo appearances from John Stamos, Ted Nugent, MC Hammer, Ozzy Osbourne, Blues Traveler, former Guns N’ Roses guitarist Slash, Dee Snider, Flavor Flav, and Tiny Tim for the MTV Awards sequence plus Mia Farrow and David Letterman as themselves along with Stern associates in Crackhead Bob, Nicole Bass, and Stuttering John Melendez. Other notable appearances include such adult/porn star actresses like Amber Smith as a lesbian Stern interviews in D.C., Janine Lindemulder as a camp director’s wife Smith talks about, Camille Grammer as a woman wearing a bikini in the snow, and Jenna Jameson as a naked woman who appears in a show for Stern during his WNBC days.

Other noteworthy small roles include Leslie Bibb as a WNBC tour guide, Edie Falco as a friend of Alison, Michael C. Gwynne as a Detroit rock DJ who insults Stern, Paul Hecht as a news anchor who briefly replaces Robin, Allison Janney as a D.C. radio boss who dislikes Stern, Carol Alt as a woman Stern meets on a plane in the film’s beginning, Reni Santoni as a NBC radio boss, Michael Murphy as the head of WNBC who wants to get rid of Stern, and in the trio of the younger versions of Stern, there’s Bobby Boriello, Michael Maccarone, and Matthew Friedman who play the different versions of the young Stern. Richard Portnow and Kelly Bishop are wonderful as Stern’s parents with Portnow being the funny one who keeps telling the young Howard to shut up. Stern associates Gary Dell’Abate and Jackie Martling are terrific as themselves with Dell’Abate trying to get people to introduce the chapters while Martling arrives in WNBC as a new collaborator for Stern.

Fred Norris is fantastic in a version of himself as this oddball comedian who helps Stern out with his routine by creating sound effects and other things that would be very funny. Mary McCormack is brilliant as Alison Stern as the wife who would support him as well as endure some of his crass jokes which would upset her but understands his need to vent. Robin Quivers is amazing as the woman who would be Stern’s conscience in his talk show as well as say some funny things as she brings a lot of personality and wit to her persona. Paul Giamatti is phenomenal in his breakthrough role as Kenny “Pig Vomit” Rushton as a WNBC suit who tries to break Stern and mold him into something safe as it’s a performance that is very funny in the way he becomes a foil for Stern and his gang. Finally, there’s Howard Stern in a remarkable performance as himself as he displays some humility and sensitivity for the scenes outside of the radio while being very crass when he’s on the radio as he has this nice balance to showcase who he is and be unapologetic about it.

Private Parts is a sensational film from Betty Thomas about the infamous yet funny radio shock-jock Howard Stern as the man himself gives a great performance. Along with some amazing supporting performances from Robin Quivers, Mary McCormack, Fred Norris, and Paul Giamatti. It’s a film that isn’t afraid to be out there and even be politically incorrect as it relates to who Stern is and why he is so controversial. In the end, Private Parts is a gloriously hilarious film from Betty Thomas.

I love this movie. It's cracked me up every time I've watched it. I agree that even though most of the major characters were just playing themselves, they were all great.

I saw this film back in the theaters as I think it's the first R-rated film that I paid for even though I was 16 when it came out. Man, it's such a riot as I love watching Howard and the gang.

I hope he does a sequel where he deals with the divorce of his first wife and then finding a new life w/ a new love and on satellite radio as well as coping with Robin's battle with cancer.