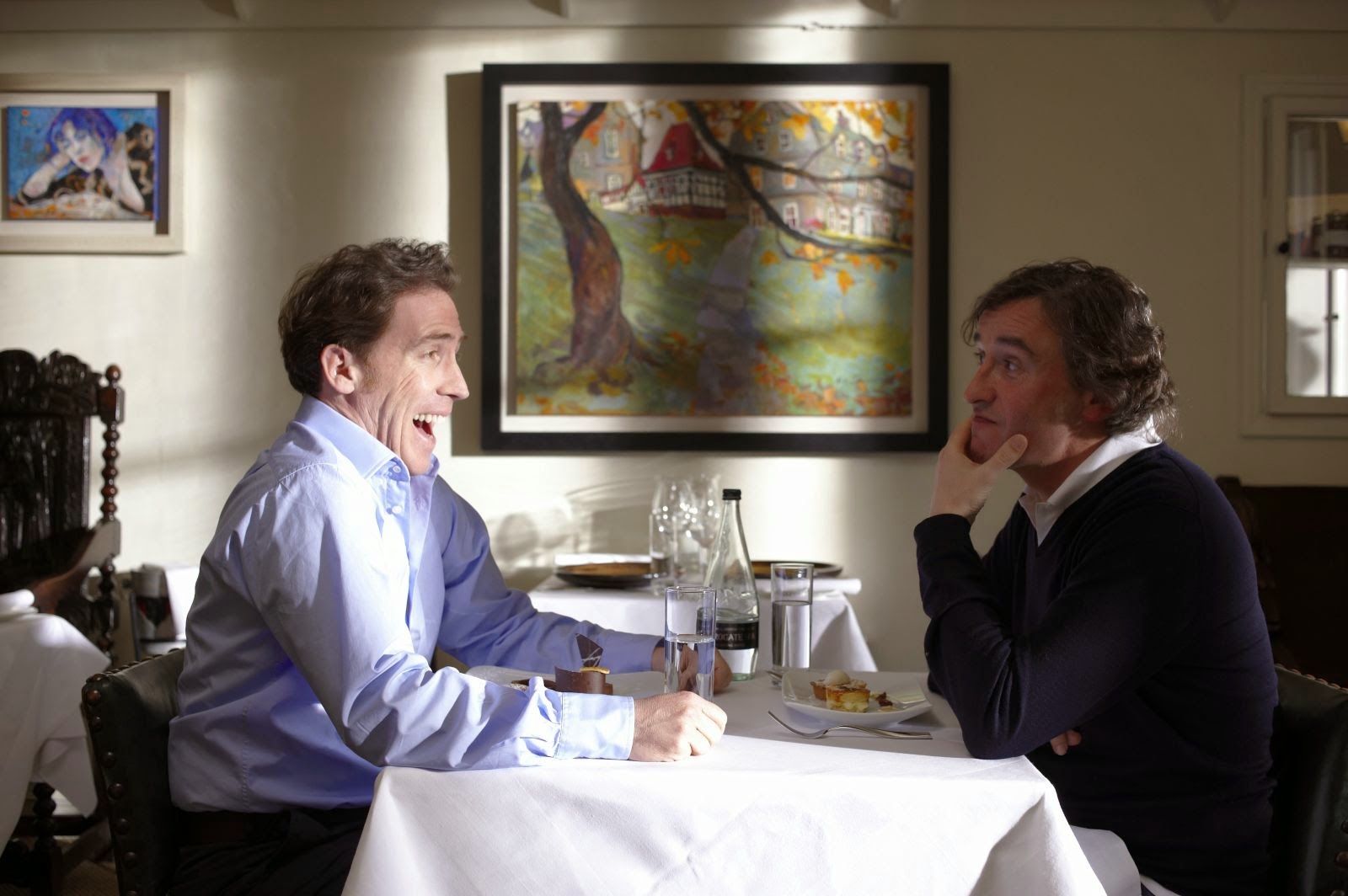 Directed by Michael Winterbottom and written and starring Steve Coogan and Rob Brydon, The Trip is a film version of the TV program of the same name where Steve Coogan and Rob Brydon play fictionalized versions of themselves as they take a trip of restaurants in the north of England. There, the two deal with the trip and each other as well as do all sorts of impressions to annoy one another. The result is a very funny and fascinating film from Michael Winterbottom.

The film is a simple story in which Steve Coogan is asked by The Observer to review top restaurants in the Northern England as he would take his friend in actor Rob Brydon along for the trip when his American girlfriend Mischa (Margo Stiley) isn’t available. In the course of the trip, Coogan and Brydon eat at various places and stay at top cottages while looking into the sights of the many locations while doing impressions of famous actors. Especially as Brydon is famous for that while Coogan tries to outdo him as the two also talk about art and text as well as their own personal differences where Brydon is content with having a family. Coogan however, is coping with being single in his 40s as he would sleep around with various women while learning he might have a big job in America. It all plays into two guys going into various places in the North of England as they deal with the richness of its location and the food.

Michael Winterbottom’s direction is very simple as he creates a lot of wide shots to capture the many different locations and landscapes in Northern England while keeping things loose and lively in his approach to the humor. He also maintains an intimacy to the way Coogan and Brydon deal with each other as Winterbottom uses close-ups and medium shots to frame them trying to outdo each other in terms of impressions. Most notably the scene where both men are trying to impersonate Michael Caine as they’re eating all sorts of very fine and rich food. Winterbottom would shoot scenes of all of this food that is being made in the greatest attention to detail as well as how Winterbottom would shoot some of the locations in the various places including the mountains and such to play into the sense of wonderment that Coogan and Brydon encounter. Especially as the former copes with changes in his career while having strange dreams about these changes. Overall, Winterbottom creates a very delightful and witty film about two guys going on a trip to the North of England and do Michael Caine impressions.

Cinematographer Ben Smithard does excellent work with the film‘s cinematography as it captures much of the beauty of the different locations while using some low-key lights for some of the interior scenes at night and in the morning. Editors Mags Arnold and Paul Monaghan does terrific work with the editing as it‘s very straightforward to play into the humor of the film including Coogan‘s dream sequences. Costume designer Celia Yau does nice work with the costumes as it‘s very straightforward for what the men wear. Sound editor Joakim Sundstrom does superb work with the sound as it‘s very low-key to capture the many moments on the film‘s different locations. The film’s music by Michael Nyman is amazing for its plaintive and low-key piano score to play into some of the melancholia that looms over Coogan.

The casting by Shaheen Bag is wonderful as it features some notable small roles from Rebecca Johnson’s as Rob’s wife, Marta Barrio as a photographer Coogan would sleep with, and Margo Stiley as Coogan’s American girlfriend Mischa who was supposed to join him on the trip only to be stuck in America for work. Finally, there’s the duo of Steve Coogan and Rob Brydon in phenomenal performances as themselves where both of them bring a lot of wit as well as energy to their roles with Coogan trying to be cool and Brydon trying to outdo Coogan. Even as Brydon is the more likeable of the two as he charms Coogan’s parents while Coogan brings more dramatic weight as it relates to his own crisis about the idea of going to America and getting older.

The Trip is a remarkable film from Michael Winterbottom that features fun performances from Steve Coogan and Rob Brydon. Though it’s an abridged version of the TV show, it is still an enjoyable film to watch just to see two guys going on a road trip and do Michael Caine impressions. In the end, The Trip is an exhilarating film from Michael Winterbottom.

Never got around to seeing this one. It sounds interesting, though.

It's a film where if you just forget about the plot and watch two guys going on a road trip and make full of themselves. It's the film for you. Plus, I'm a Winterbottom fanboy as I really liked this one.

I keep hearing about this but have not sat down to watch it. I really should.

@Fisti-If you have Showtime or any of its channels, DVR it now.

I quite enjoyed this one for the dry humor + hilarious impersonations! Too bad the sequel wasn't as good though.

@ruth-I do want to see the sequel as I'll watch anything that Winterbottom does though he's made a few films I didn't like.