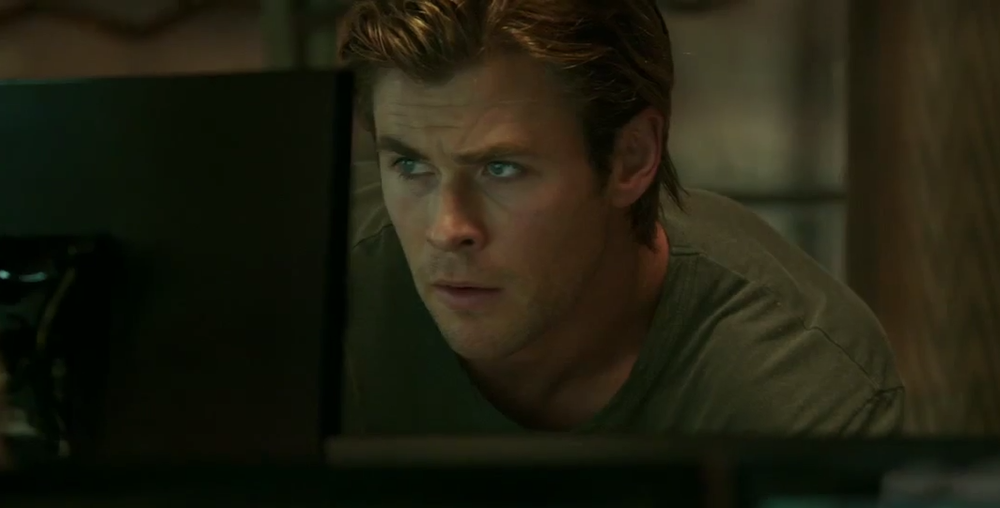 Directed by Michael Mann and written by Morgan Davis Foehl, Blackhat is the story of a convicted hacker who is asked by U.S. and Chinese government officials to aid them in uncovering a cyber-terrorist following a series of cyber-terrorist activities. The film is an exploration into the world of cyber-terrorism as it is becoming prevalent in the 21st Century where a hacker is asked to find the criminals as he copes with some of his actions. Starring Chris Hemsworth, Tang Wei, Holt McCallany, Wang Leehom, and Viola Davis. Blackhat is a riveting and compelling film from Michael Mann.

With the news of cyber-terrorism finally coming into the forefront of the public, the film is about the dangers of cyber-terrorism when a Chinese nuclear power plant was attacked prompting a Chinese government official to work with the American government to get an old friend out of prison so he can help uncover these acts of cyber-terrorism. It’s a film that plays into the idea of what is a new world order as well as the dangers of technology in how it can create chaos where the enemy itself are faceless individuals who are wreaking havoc on the world of economics which makes countries vulnerable. There’s a lot of intriguing ideas that goes on in the film as it relates to the world of cyber-terrorism but it has elements in the script by Morgan Davis Foehl that doesn’t work.

Part of the flaws in the screenplay involves some of the conventional dramatic elements involving its protagonist Nick Hathaway (Chris Hemsworth) and Chen Lien (Tang Wei) as the latter is the younger sister of China’s cyber warfare official in Captain Chen Dawai (Wang Leehom) who was a former college roommate of Nick and was the one that got him out of jail so that Nick can be helpful. The romance between Hathaway and Lien feels like it’s part of another film as it doesn’t really seem necessary to the story as a lot of it involves intrigue and what needs to be done. Especially as the trio are working with two FBI agents in Carol Barrett (Viola Davis) and Jessup (Holt McCallany) to find out who are the hackers and why they’re creating chaos. The eventual reveal of the villains themselves do come to ahead but their motivations aren’t very clear other than money as it is very ambiguous where it is among some of the conventional elements of the script that doesn’t really work.

Michael Mann’s direction is very entrancing as it is set in various locations in order to make the film play into this feeling of a new world that is being torn apart by modern technology. Much of Mann’s direction has him playing into a world that is chaotic where he uses a lot of hand-held cameras for some of the film’s action and gunfight sequences while creating elements of suspense in other scenes to convey this sense of a new world order. Shot in various locations in places like Los Angeles, Hong Kong, Kuala Lampur in Malaysia, and Jakarta, the film does have this sense of a feel that this worldwide where Mann’s approach to wide shots add to a film where it’s taking place around the world. Even as Mann creates feels very intimate in some of the drama with his usage of close-ups and medium shots to play into these characters embarking on something that they don’t really know.

Much of that intimacy and frenetic approach to action and suspense is shot on digital where Mann definitely aims for something that is not very polished but rather grainy as if it adds to this dark tone of the film. Especially for scenes set at night where Mann seems at home in displaying these elements of gunfights as well as in the action that includes its chilling climax in Jakarta. The usage of sequences inside the computers add to the air of suspense as well as the feeling that this is a new world and terror could come from anywhere. Even as the weapon is a simple laptop can trigger a nuclear power plant meltdown as it adds to the sense of a world that is far more dangerous than what it was. Though not everything in Mann’s direction works as well as the flaws that are present in the film’s script. The overall results still showcase Mann creating a very engaging film about the world of cyber-terrorism.

Cinematographer Stuart Dryburgh does brilliant work with the film‘s very wobbly yet entrancing cinematography with its element of blurry images as well as the use of lights for many of the scenes set at night in the film‘s many different locations. Editors Joe Walker, Stephen Rivkin, Jeremiah O’Driscoll, and Mako Kamitsuna do excellent work with the editing with its usage of montages to play into the effects of the hacks as well as some intense rhythmic cuts to play into the action and suspense. Production designer Guy Hendrix Dyas, with set decorator Victor J. Zolfo and supervising art director Tom Reta, does fantastic work with the set designs from the FBI and Chinese government offices to the quaint apartments in Hong Kong where the main characters do their work.

Costume designer Colleen Atwood does nice work with the costumes as it‘s mostly casual with the exception of the uniform that Dawai wears in China as well the stylish clothes that Lien wears. Visual effects supervisors Phil Brennan, Joe Farrell, and John Nelson do superb work with the visual effects for the computer hacking sequences as well as a few moments in the action scenes. Sound editor Victor Ray Ennis and sound designer Tony Lamberti do terrific work with the sound to play into the way computers and their codes hack into certain places as well as the moments in some of the film‘s action scenes. The film’s music by Harry Gregson-Williams, Atticus Ross, and Leo Ross is wonderful for its score as it is largely electronic-based courtesy of the Ross brothers with a few orchestral flourishes from Gregson-Williams while music supervisor Gabe Hilfer brings in bits of traditional Asian music, electronic, and rock music into the mix.

The casting by Bonnie Timmerman is incredible as it features small performances from William Mapother and Jason Harner Butler as FBI officials, Andy On as a Hong Kong police inspector, Ritchie Coster as a mysterious figure named Kassar, and Yorick van Wageningen as another mysterious figure who is connected to the acts of cyber terrorism. Holt McCallany is terrific as FBI Agent Jessa as someone who is keeping an eye on Hathaway while knowing what is at stake as it relates to the mission at hand. Viola Davis is fantastic as FBI Agent Carol Barrett as this no-nonsense agent who knows about Hathaway’s reputation as she is reluctant to trust him while becoming aware that she and her team are facing an unknown enemy as Davis plays it straight with bits of humor into her performance. Leehom Wang is brilliant as Captain Chen Dawai as an old friend of Hathaway who asks for his help as he tries to uncover the mystery of the hacks as well as dealing with what he’s being asked to do by his bosses.

Tang Wei is excellent as Dawai’s sister Lien as she is also good with a computer as she aids in uncovering the mystery while dealing with her attraction towards Hathaway. Finally, there’s Chris Hemsworth in a superb performance as Nick Hathaway as this accomplished hacker who is temporarily released from prison as he helps the FBI uncover the hacker attacks as he copes with returning to prison as well as the dangers of what he’s facing.

Blackhat is a stellar yet flawed film from Michael Mann. While it has an excellent cast as well as compelling ideas about cyber-terrorism, it’s a film that falls short as it relates to being far more intriguing due to some of the conventions of the screenplay. However, it does play into a world that is becoming more uneasy as cyber-terrorism is becoming big news in the modern world. In the end, Blackhat is a very good film from Michael Mann.

Hmmm, seems like you like this a lot more than I did, and I wish I could say the same about Hemsworth and Tang Wei. I do like Leehom Wang and Viola Davis here but wish they both had more screen time.

Mann is so hit or miss with me, mostly miss, and this just looks messy and dull, but your review at least convinced me I should watch it when it lands on cable on a night when I have nothing else to do...

I agree, this is a good but not great film and the weakness is definitely the script which tries to shoehorn a romance that shouldn't really be in there. I mean, I understand why it is - as it makes what happens later on more personal to Nick and Lien, but I just didn't buy them hooking up as fast as they did.

@ruth-I would've love to have more Viola Davis and Leehom Wang as well as they were fun to watch. Yeah, I understand why people dislike it but I managed to enjoy myself despite its flaws.

@Fisti-I would wait for it on TV as it's not a total waste of time. Mann has been hit and miss as of late but I would take a mediocre or a good Mann film than everything else.

@J.D. Lafrance-I agree with you on the romantic subplot. It shouldn't have worked as I felt it should've been in another movie no matter how good Hemsworth and Wei are. It's just that script didn't do them a lot of favors except in the non-romantic scenes.