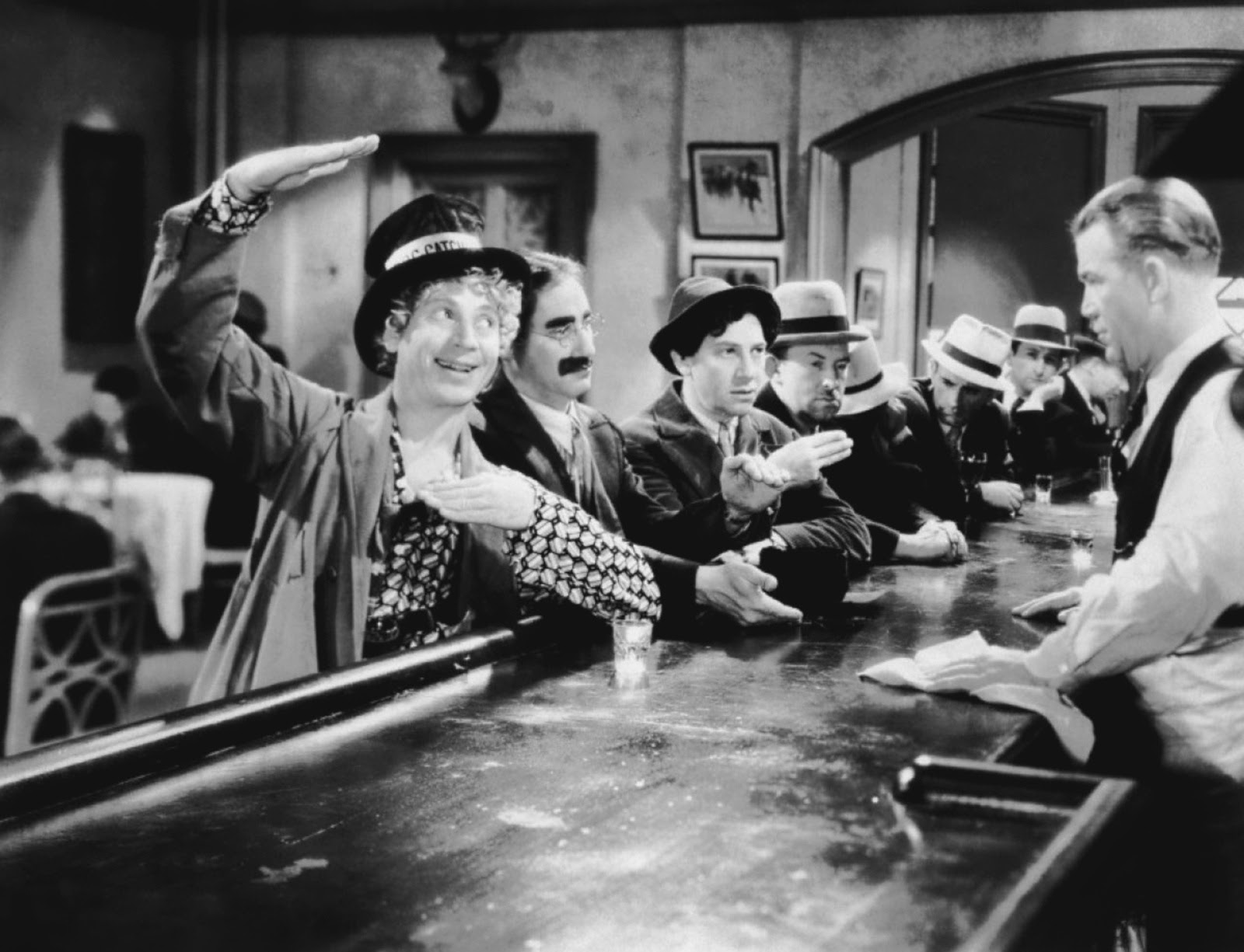 Directed by Norman Z. McLeod and written by Bert Kalmar, S.J. Perelman, Harry Ruby, and Will B. Johnstone, Horse Feathers is a film that revolves around a college football game where a college president decides to cheat in order to beat a rival school. The film is a farcical film that revolves around the world of college sports with references into the world of Prohibition as it stars the Marx Brothers in Groucho, Chico, Harpo, and Zeppo Marx. Also starring Thelma Todd and David Landau. Horse Feathers is a witty and crazy romp of a film from Norman Z. McLeod.

The film is set in a college where its new president decides to focus on beating a rival school by hiring ringers. Along the way, the president does whatever to buck the system as he woos a woman who is dating his son as well as having an affair with the president of the rival school. It’s all part of this strange world where it explores some of the corruption in colleges and how men are willing to defeat their rivals at any cost. The film’s screenplay makes no bones into that corruption while allowing the Marx Brothers to improvise in their gags which has them defying the ideas of the college system. Even as there’s a plot device where the school president enters a speakeasy to meet with two men he thinks are the ringers.

Norman Z. McLeod’s direction definitely plays into that spirit of anarchy where the improvisation feels very natural as well as some of the musical and dance numbers. Much of the direction involve a lot of medium shots to play into that spirit along with gags that keep on being inventive and lively. While some of those gags are presented with some botched cuts due to being out of print and some moments of the film were cut as some of those moments feel abrupt. Yet, it doesn’t deter from the sense of comedy as it includes this climatic showdown in the football game which is total anarchy at its finest. Even in scenes where the president and his men do whatever to romance the woman whom his son has been going out with. Overall, McLeod creates a wild and sensational film about a college professor trying to cheat in a football game against a rival school.

Cinematographer Ray June does excellent work with the film‘s black-and-white cinematography to play into the craziness of the comedy as well as a vibrant look for its interior and exterior settings. Sound mixer Gene Merritt does nice work with the sound to help play into some of the gags as well in some of the raucous moments in the football game. The film’s music by John Leipold is fantastic for its mixture of folk and classical as it includes a performance in the latter by Harpo while the songs by Bert Kalmar and Harry Ruby are very funny as it’s often full of anarchy as well as play into the personalities of the characters.

The film’s cast is brilliant as it features some notable small roles from Reginald Barlow as the retiring professor, Nate Pendleton and James Pierce as the original ringers, Walter Brennan as a football commentator, and Robert Greig as a biology professor who loses control of classroom due to the actions of the Marx Brothers. David Landau is terrific as the film’s antagonist Jennings who is a secret lover of Connie as he tries to get her to find out what the rival school is up to. Thelma Todd is amazing as Connie as Jennings’ mistress who is also having an affair with the rival president’s son Frank as she would get the attention of his father and his ringers.

Zeppo Marx is excellent as Frank as the president’s son who is wooed by this woman as he is supposed to get an education as Zeppo is the most straightforward character of the film. Chico Marx is superb as the talkative and smart-aleck Baravelli while Harpo Marx is great as the very silent but innocent mute Pinky who does many of the film’s hilarious gags. Finally, there’s Groucho Marx in a thrilling performance as President Quincy Adams Wagstaff as he maintains that spirit of complete anarchy while saying things that are very brash as it’s such a fun performance.

Never heard of this, but I'm extremely underversed in the Marx brothers. I need to see more of their stuff. I think I've only seen the circus one and Duck Soup, and I'm not even sure I've seen all of Duck Soup...

I'm doing a mini-marathon of the films starring the Marx Brothers this month as this is the 2nd film of theirs that I've seen. Duck Soup is so far my favorite. They're hilarious. Especially Harpo who is my favorite.

Did you read the trivia about the band Queen and how their album titles are inspired by Marx Brothers?

Horse Features is ok, just for me I prefer Night at the Opera, Duck Soup, and Monkey Buisness. I have yet to see Animal Crackers, which is also considered among their finest.

I just did as I just saw A Night of the Opera as I'm writing the review on the film right now. This one was excellent though I'm sure it is funnier in its original version.