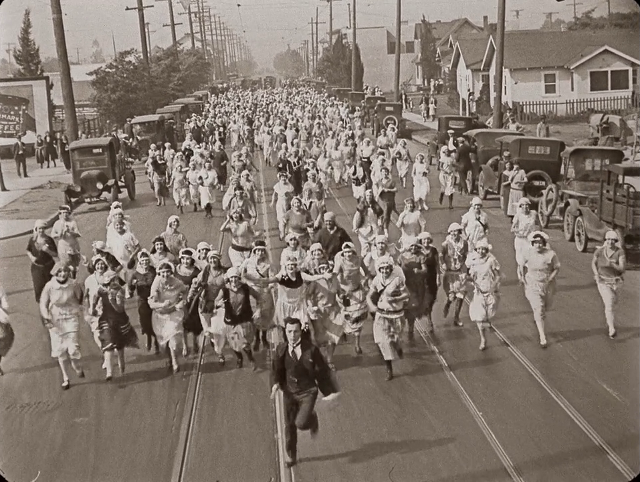 Based on the play by Roi Cooper Megrue, Seven Chances is the story of a young heir who must find a bride to marry before 7PM to collect the money his grandfather is giving him as part of his inheritance. Directed, starring, and edited by Buster Keaton and screenplay by Clyde Bruckman, Jean Havez, and Joseph A. Mitchell from a story by David Belasco, the film is set in the span of an entire day where a man has to marry someone where a lot of craziness ensues during the day. Also starring T. Roy Barnes, Snitz Edwards, Jean Arthur, and Ruth Dwyer. Seven Chances is a hilarious film from Buster Keaton.

The film is a simple story where a young man is about to inherit $7 million on his 27th birthday if he can marry someone by 7PM. It’s a film that takes this simple premise where a young man is in love with someone but his screw-ups forces him to try and find other brides with the help of his business partner and a lawyer as chaos ensues. All of which plays into a series of events where Jimmie Shannon (Buster Keaton) is put into a situation as it climaxes with a wild chase as news was revealed about what he needs in a desperate attempt to claim his fortune.

Buster Keaton’s direction has elements of simplistic images from the opening sequence of Jimmie spending time with his girlfriend Mary (Ruth Dwyer) as he tries to tell her that he loves her. Much of it involves some unique medium shots and a few gags as Keaton does start things off in a simple manner to build up the humor of the story once Jimmie’s situation comes into play. Especially as the gags become more inventive in a sequence where Jimmie tries to talk to many prospects only to fail where Keaton’s rhythmic editing help play to the timing of the gags. All of which leads to a climax where Jimmie is being chased by lots of brides where Keaton’s use of wide shots, tracking dolly shots, and crane camera angles come into play. Especially where Keaton would perform these crazy stunts to play into Jimmie’s own predicament as he is trying to avoid all of these brides in a climax that is thrilling and full of laughs. Overall, Keaton creates a very fun and exciting film about a guy trying to get married to collect his inheritance.

Cinematographers Byron Houck and Elgin Lessley do brilliant work with the film‘s black-and-white photography though it‘s mostly presented in a sepia-like tone with the exception of an early version of Technicolor film stock for the film‘s opening sequence. Art director Fred Gabourie does nice work with the minimal set pieces from the home where Mary lived as well as the country club that Jimmie goes to. The film’s music by Robert Israel (for its 1995 reissue) is amazing for its very playful piano score with some orchestral flourishes to play into the film‘s humor and sense of adventure.

The film’s excellent cast includes some notable small roles from Jean Arthur as a country club receptionist, Frances Raymond as Mary’s mother, Erwin Connelly as the clergyman, Snitz Edwards as the lawyer, and T. Roy Barnes as Jimmie’s business partner who tries to help him. Ruth Dwyer is wonderful as Jimmie’s girlfriend Mary who is baffled into why he wants to get married immediately as she tries to figure out what is going on. Finally, there’s Buster Keaton in an incredible performance as Jimmie Shannon as this guy who learns he’s about to collect a major inheritance as he copes with his situation as Keaton brings a lot of guts into his stunt work including scenes where he is running down a hill with rocks behind him as well as the chase sequence as it’s one of Keaton’s finest performances.

Nice one Steven. I'm gonna read a few more reviews of Keaton's work and see which ones I'm most intrigued to check out. The subject matter of this one sounds pretty fun though.

This is an entertaining film though it sort of falls short of the other films of his I've seen so far. Yet, it's very entertaining. Avoid the remake of that film which you might've heard of called The Bachelor w/ Chris O'Donnell and Renee Zelwegger.