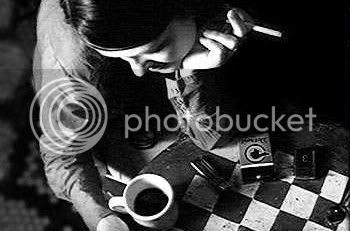 Written and directed by Jim Jarmusch, Coffee and Cigarettes is a collection of 11 vignettes relating to people having conversations about anything while drinking coffee and smoking cigarettes. The film is a collection of 11 shorts, three of which were made prior in 2003 including the 1993 Somewhere in California segment that won Jarmusch the short film Palme D’or at the 1993 Cannes Film Festival. With an all-start cast that includes Roberto Benigni, Steven Wright, Joie Lee, Cinque Lee, Steve Buscemi, Iggy Pop, Tom Waits, Cate Blanchett, Steve Coogan, Alfred Molina, Issach de Bankole, Jack & Meg White of the White Stripes, RZA & GZA of the Wu-Tang Clan, and Bill Murray. Coffee and Cigarettes is fun collection of shorts and vignettes from Jim Jarmusch.

In Strange to Meet You, Roberto Benigni and Steven Wright meet as Wright is nervous about a dentist appointment during a conversation about their love coffee and cigarettes. Twins is about twins (Joie Lee and Cinque Lee) drinking coffee and smoking cigarettes in Memphis as a waiter (Steve Buscemi) tells them his theories about Elvis Presley and his twin brother Jesse. Somewhere in California has Iggy Pop and Tom Waits have an awkward conversation as Waits claims he’s a doctor while Pop offers him a drummer he has just worked with. Those Things’ll Kill Ya has Joseph Rigano and Vinny Vella talking about their vices as Vinny’s son Vinny Jr. asks for money via sign language in an act of silence.

Renée has Renée French drinking coffee and looking at magazine while a waiter (E.J. Rodriguez) tries to serve her. No Problem is about two friends (Issach de Bankole and Alex Descas) talking as Issach keeps asking Alex questions about some issues. Cousins is about Cate Blanchett meeting her cousin Shelly (Cate Blanchett) at a hotel lounge where they talk about their lives as Shelly reveals she has a new boyfriend. Jack Shows Meg His Tesla Coil has Jack White showing Meg the Tesla Coil he had while talking about the brilliance of Nikola Tesla.

Cousins? has Alfred Molina and Steve Coogan having tea in Los Angeles talking about their career as Molina shows him something claiming he and Coogan are cousins. Delirium is about GZA and RZA talking about alternative medicines and the dangers of caffeine where Bill Murray appears drinking a mug of coffee. Champagne is about two old men (William “Bill” Rice and Taylor Mead) talking about nostalgia as the music of Mahler.

The concept of the film is about two or three people having conversations about practically anything while drinking coffee and smoking cigarettes. Throughout each segment, there is a looseness to the story as many of the conversations are improvised where people talk about many things throughout. Whether its about music, art, coffee, cigarettes, Nikola Tesla, anything, or maybe nothing at all. The idea of drinking coffee and having a smoke is something intriguing to Jim Jarmusch throughout many of these shorts that have been created from 1986 through 2003.

Through each short as they’re all presented in black and white with varying running times, Jarmusch is able to keep the camera still and often shooting the coffee and cigarettes. At the same time, he repeats a few motifs and dialogues to keep the all the shorts connected in one way or another. While a lot of the shorts work and a couple like Renée and Champagne don’t work entirely, Jarmusch does create what is certainly a fascinating film.

Helping Jarmusch with his vision are a team of cinematographers, editors, and production designers that get involved in the film throughout the years. With Frederick Elmes shooting a large portion of the material while Tom Di Cillo does Strange to Meet You, Robby Mueller on Twins, and Ellen Kuras for Renée and No Problem. The cinematography from the early parts have a grainy look while it becomes a bit more refined to complement the atmosphere of each section. Editor Jay Rabinowitz doing a lot of the segments while Jim Jarmusch and Terry Katz did Somewhere in California and Melody London doing Twins and Strange to Meet You. The editing is very tight and rhythmic to capture a lot of the conversations while Renée and Champagne kind of meanders a bit.

Mark Friedberg and Tom Jarmusch do a lot of the production design of the film to help set the mood for each segment that is happening while Dan Bishop does the Twins segment. For the sound work, longtime Jarmusch collaborator Anthony J. Ciccolini III does a lot of the sound work and mixing for all of the segments including the remixing for the older segments. The soundtrack is a mixture of music that is played the background though the film opens and closes with Louie, Louie by Richard Berry opening the film and Iggy Pop’s cover closing the film. The rest of the soundtrack includes pieces by Tom Waits, Jerry Byrd, the Stooges, Tommy James & the Shondells, the Skatalites, Funkadelic, and Gustav Mahler.

The cast is truly phenomenal as there’s a wonderful array of performers many of whom are playing themselves or exaggerations of themselves. Notable standouts include Bill Murray, RZA, and GZA in Delirium, Steve Buscemi in Twins, Steven Wright and Robert Benigni in Strange to Meet You, Steve Coogan and Alfred Molina in Cousins?, Iggy Pop and Tom Waits in Somewhere in California, and the White Stripes in Jack Shows Meg His Tesla Coil that features a cameo from Cinque Lee. The best performance easily goes to Cate Blanchett in the Cousins segment as she plays herself and her cooler cousin with long black hair and stylish clothes as it’s a funny, remarkable performance.

Coffee and Cigarettes is an entertaining yet captivating film from Jim Jarmusch. While it may not reach the heights of great films like Mystery Train and Night on Earth as a whole. Some of the vignettes do stand out as great little mini-masterpieces of Jarmusch as a filmmaker who likes to keep things simple and to the point. It’s a film that fans of his work will enjoy where they to get to revisit the older shorts and see some new ones. In the end, Coffee and Cigarettes is a stylish yet enjoyable film from Jim Jarmusch.

I liked certain parts better than others, but as a whole, I liked what Jim did with each little bit. The best was Cousins?, because it is just so perfectly acted by both and seems so true. Good Review Steven!

I like a lot of it while a couple were OK but didn't really do it for me.

Cousins? is one of my favorite shorts though I much preferred Cousins with Cate Blanchett. It was very funny. My favorite segment is Somewhere in California.