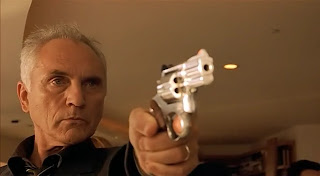 Cinema in the 1970s brought not just a return to realism but also paved the way for new actors, notably those who looked like guys next door or the guys who just came out of the street. Guys like Charles Brosnan and Clint Eastwood weren’t guys that were very pretty but they could kick your ass. They weren’t the tallest guys; the strongest, or buffed up, they were some serious dudes that are likely to be one of the last guys standing. Then after the 70s ended, guys like Sylvester Stallone and Arnold Schwarzenagger came in with their beefy, macho-like roles that not many guys could relate to except in the terms of violence. Then in 1999, fresh off his comeback film Out of Sight, independent film director Steven Soderbergh decided to return to that old-school genre of realistic tough guys for his 1999 movie entitled The Limey.

Directed by Soderbergh and written by Lem Dobbs, The Limey is about an old British ex-con named Wilson who goes to Los Angeles to investigate the death of his estranged daughter. Learning that her murder was with involvement by a 1960s record producer and his goons, Wilson pursues the truth while having very few friends and an increasing number of enemies. With a non-linear approach to the film’s story, Soderbergh and company goes for a more idiosyncratic tone of the film while remaining true to its storyline. Starring 60s icons Terence Stamp and Peter Fonda in leading roles along with Soderbergh regular Luis Guzman with Lesley Ann Warren, Barry Newman, Bill Duke, Joe Dallesandro, Nicky Katt, Amelia Heinle, and Melissa George. The Limey is a stylish, entrancing crime drama that is both sinister and seductive.

A former convict named Wilson (Terence Stamp) has arrived to Los Angeles from London after hearing the news that his daughter Jenny (Melissa George) had just been killed. Having not seen his daughter for many years since his conviction for robbery, Wilson wants answers as he meets a man named Eduardo Roel (Luis Guzman). Roel believes that Jenny was killed by a man named Terry Valentine (Peter Fonda), a record producer from the 1960s, whom Jenny had been dating as Wilson tries to find more answers about Valentine. After confronting a foreman (William Lucking) and some goons, he sends a message to one of the goons to tell Valentine that he's coming for him. While Valentine hears the news in his home at the Hollywood Hills from his advisor Avery (Barry Newman), he asks Avery to take care of things.

Wilson meanwhile, meets Elaine (Lesley Ann Warren) who was a friend of Jenny from an acting class as she tells him more about his daughter. When Wilson goes to Valentine's house for a party with Roel, they realize that they have to wait as he sends a message by killing one of Valentine's bodyguards prompting Avery to hire a couple of men named Stacy (Nicky Katt) and Uncle John (Joe Dallesandro) to find Wilson. With Wilson spending more time with Elaine as he reveals his regrets, a planned hit on Wilson backfires due to the involvement from the DEA as an officer (Bill Duke) who reveals some news to Wilson about some drugs relating to Valentine. Wilson, Roel, and Elaine go on a trip to Big Sur as Wilson is ready to confront Valentine over the death of Jenny.

What makes The Limey such a majestic crime drama is how Soderbergh approach Dobbs’ screenplay into a non-linear, idiosyncratic style. The film plays like a crime drama but with a more restrained, subtle tone with references to the past and present. The film is really more of a tribute to the 1970s crime dramas since it captures that tone but with a new cinematic style with Soderbergh’s diverse directing style of hand-held camera movements and wondrous steadi-cam shots. Even though it’s set in Los Angeles, the film also contains a British feel with not just Stamp but also the films of Ken Loach and John Boorman. Loach’s debut film Poor Cow is even shown for flashback scenes involving Stamp’s character. Dobbs’ script is also idiosyncratic, especially with its stylized, campy dialogue about the 1960s, women, and all sorts of stuff, especially with Stamp’s cockney accent that plays well to British-American dialogue where Roel asks Elaine “Do you understand half the shit he’s saying?”

With Dobbs’ script and Soderbergh’s direction in tow, credit should also go to Edward Lachman for his lush, dreamy cinematography. With shades of blurry blue for flashback scenes, Lachman captures a translucent, colorful tone of the movie that is evocative in its presentation and works well with Soderbergh’s directing style. Helping the film in its non-linear style is editor Sarah Flack, who brings a stylized, jump-cut like editing style while using the scenes from Poor Cow to convey the style that Soderbergh wanted that is masterfully presented. With Gary Frutkoff in the production design, the film does have that L.A. look, notably in the houses of Valentine. Former Red Hot Chili Peppers drummer and longtime Soderbergh collaborator Cliff Martinez brings a haunting, melancholic piano film score with his broken notes to convey the sadness of Wilson. The film’s music aside from Martinez’s score is filled with electronic tracks from Danny Saber along with lovely cuts from the Hollies, Boston, Doobie Brothers, David Crosby, Steppenwolf, and kicking things off for the movie, The Who’s The Seeker.

Then, there’s film-amazing cast with wonderful performances from its actors. While Melissa George was only seen in flashbacks, she was wonderful in her scenes while Amelia Heinle is gorgeous in the role of Peter Fonda’s girlfriend, who doesn’t know what people like Avery are doing with Fonda. Nicky Katt and Joe Dallesandro are excellent as Avery’s goons with Katt delivering great one-liners and Dallesandro having a great moment playing mentally challenged in a pool hall scene. Bill Duke, in an uncredited cameo, is excellent as the tough-as-nails DEA agent who is more concerned about the drugs rather than the money in a hilarious dialogue-driven scene with Stamp. Barry Newman is wonderful as Valentine’s advisor who is like a crime boss, trying to protect his man and is willing to do anything for Valentine, especially if it meant confronting a guy like Wilson. Lesley Ann Warren gives a lovely, understated performance as Elaine with her motherly, frustrated role in scenes with Stamp where she is angry with him but also feels sorry for him because he lost his child and blames himself for it.

The film’s best supporting performance easily goes to Luis Guzman as Eduardo Roel, with his street-wise, comic, and conscience-driven performance. Guzman in ways plays Sancho Panza to Stamp’s Don Quixote since Roel is trying not to get in trouble, after having serving time for his misdoings. He also makes sure that Wilson doesn’t do anything stupid or do anything huge while becoming the only ally that Wilson has. This is clearly one of Guzman’s best performances, as he remains one of the most versatile, and underrated actors of the industry. Fresh off his comeback performance in Ulee’s Gold, Peter Fonda brings another iconic-like performance as Valentine with his restrained, creepy performance that is very complex in its charm where underneath it, there’s a fear and sadness. Fonda brings a masterful performance in a role that isn’t really villainous but more of someone who is in anticipation for something to happen while he is unsure what to do. This is indeed one of the best performances from Peter Fonda.

Terence Stamp delivers probably one of his best performances in years after being in small, supporting roles where he came out flawless, even in bad films. Stamp is complex in his anger and sadness as he plays a man, living with regret trying to find some closure to his shortcomings as a father. In scenes involving his anger, his physique may not be the kind that would help win a fight but the determination and conviction is strong. In more dramatic scenes, we see Stamp in top form where he brings his own flaws where he doesn’t bring out sympathy but also a man who really wants to have a second chance. Stamp has wonderful chemistry with Warren and Guzman while this film truly gives him the comeback he deserves.

The Limey is a majestic crime film from Steven Soderbergh with great performances from Terence Stamp, Peter Fonda, and Luis Guzman. While the film may not be up to par with sex, lies, & videotape, Out of Sight, or Traffic, it’s one of Soderbergh’s best films that made good on his comeback after being idiosyncratic in the early 90s. Fans of 1970s crime films will find something refreshing about The Limey especially with icons like Stamp and Fonda in their roles while they get a nice dose of tough-guy attitudes. In the end, The Limey is just a movie that makes you feel good while wanting to play up to that Cockney dialogue.