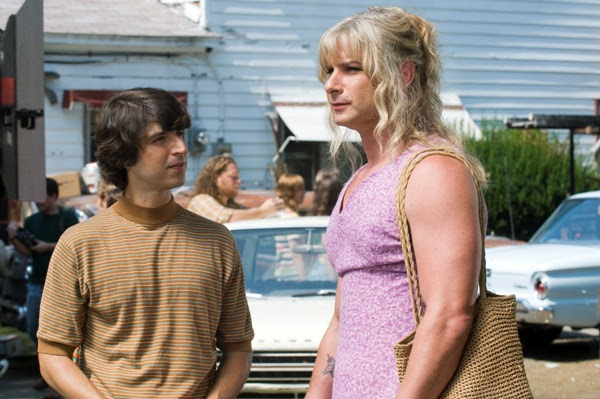 Based on the memoir Taking Woodstock: A True Story of a Riot, a Concert, and a Life by Elliot Tiber and Tom Monte, Taking Woodstock tells the story of how the famous 1969 music festival in Bethel, New York came to life with the help of a young man who brought the festival to his town. Directed by Ang Lee with an adapted script by longtime collaborator James Schamus, the film is an exploration on Tiber’s young life as he tries to save his parents’ motel by getting more than half a million people to attend the festival. Starring Demetri Martin, Imelda Staunton, Henry Goodman, Liev Schreiber, Jonathan Groff, and Eugene Levy with appearances from Paul Dano, Dan Fogler, Kelli Garner, Mamie Gummer, and Emile Hirsch. Taking Woodstock is a good though underwhelming film from Ang Lee.

Elliot Tiber (Demetri Martin) is an aspiring interior designer/artist who returns home to the El Monaco Motel in his town of Bethel, New York as it’s in danger of foreclosure. With his parents Jake (Henry Goodman) and Sonia (Imelda Staunton) short on cash, Elliot decides to help them as he hopes to organize another small music festival to raise money. With the realization that he needs to raise the money by the end of the summer, he seeks help from a local drama troupe to help them as he hears the news about a concert festival that is looking for a location. Elliot, who is also the local chamber of commerce, offers a permit to the concert organizers where he meets Michael Lang (Jonathan Groff) who brings his team to scout the location. Finally finding the place on the farm of Max Yasgur (Eugene Levy), Yasgur makes them a deal to hold the concert on his land.

With Elliot having some money that could help his family, he faces some trouble with the locals and health inspectors looking over the hotel as a transvestite named Velma (Liev Schreiber) offers to help as security. With Elliot realizing that more than a 100,000 people will show up and a press conference where he gets high becomes a disaster. He gets into really big trouble with the organizers as people come in thinking it’s a free concert as a lot more people come in. With his parents working to deal with the people, Elliot meets a carpenter named Paul (Darren Pettie) whom he falls for though he wonders what his dad will think about his homosexuality.

With the Woodstock concert finally happening, Elliot tries to see the show as he encounters a couple of hippies (Paul Dano and Kellie Garner) while hanging out with his old friend Billy (Emile Hirsch), a former Vietnam vet. Elliot also tries to deal with his mother’s strict attitude while his father seems to enjoy having the young hippies around. With all of the things happening around him, Elliot ponders his life and the family he loves while trying to catch a glimpse of the show at Woodstock itself.

The film is about how the famed Woodstock festival in August of 1969 was organized and how it found its location near a motel run by a Jewish couple and their gay son where the woman is a Russian refugee. Yet, it’s an interesting story for some aspects of the film as it’s told from the perspective of a young man who is essentially trying to save the motel his parents had been working hard for. Once that motivation for Elliot to save his motel happens through getting Woodstock to come to his town, the film’s mood starts to change a bit from a comedy to a character study that doesn’t really work very well.

The third act has Elliot trying to go to the concert but the real disappointment isn’t that the film doesn’t get to show the concert as it’s happening. Instead, there’s an acid trip and a mud slide where it kind of meanders a bit. Then there’s the character of Elliot Tiber where as a protagonist, he isn’t very interesting despite his development and character struggle with his homosexuality. While there’s a bit of reference to the Stonewall riots, the homosexuality parts of the film doesn’t really fit in with the narrative. While screenwriter James Schamus does some fine work in creating some interesting supporting characters and the organization of the festival. He didn’t do enough to create a very engaging third act where isn’t sure what to do.

Ang Lee’s direction is very stylish in its presentation as the opening credits scene features a lot of split screens and multiple shots of events happening at the same time. Lee does a lot to create some light-hearted moments that includes some funny scenes of Elliot’s parents fighting some anti-Semitic kids or some mob guys or stuff where people decide to get naked. There is a looseness to the direction that makes it very engaging for most of the film. By the time it comes to the third act, there’s still a few funny moments but it starts to drag a bit once Elliot encounters various people where it includes a very silly acid trip with weird visual effects that looks very silly. While Lee does create some wonderful compositions and intimate camera work throughout the film, he creates a film that is pretty decent but loses its excitement in the third act.

Cinematographer Eric Gautier does some wonderful work with the film‘s colorful cinematography in capturing the gorgeous landscape of upstate New York. Gautier’s photography has a lushness to many of the daytime exteriors while creating a more intimate look for some of the interior scenes in the film along with the nighttime exterior shots. Longtime Lee collaborator Tim Squyres does some fantastic work with the editing by creating a lot of stylized cuts to re-create some of the shots and multiple split-screens that is really an ode to the original Woodstock movie.

Production designer David Gropman, along with set decorator Ellen Christiansen and art director Peter Rogness, does some fine work with the look of the motel that Elliot lives in along with the farm and places that he frequents to. Costume designer Joseph G. Aulisi does some excellent work with the costumes from the straight-laced clothes that Elliot wears to the more lavish clothes many of the hippies wear. Visual effects supervisor Brendan Taylor does some OK work with the visual effects for the acid trip scene where some of the animation is inspired but it doesn‘t fit in with the tone of the film and makes the scene to be very silly. Sound editors Eugene Gearty and Phillip Stockton do some good work with the sound to capture the quietness of the town to the chaos and blaring music once the concert starts to happen.

The film’s score by Danny Elfman is a very folk-driven score to play to the setting that is 1969 with brimming acoustic guitars as it’s mostly set in sparse places. While Elfman’s score is very good, the rest of the music is surrounded by cuts from the music of the time such as Richie Havens, the Band, Crosby, Stills, & Nash, Janis Joplin, Arlo Guthrie, Blind Faith, the Doors, the Seeds, Love, Ravi Shankar, Jefferson Airplane, and the Grateful Dead plus a song from Judy Garland to complement the taste of the gays. The overall soundtrack is a real highlight of the film since it brings a bit of nostalgia as well as a primer for new listeners to the music of the times.

The casting by Avy Kaufman is pretty good for the large ensemble that is created that includes memorable appearances from Skylar Astin as Woodstock organizer John P. Roberts, Richard Thomas as Reverend Don, Darren Pettie as the construction worker Elliot falls for, Adam LeFerve as a local who despises Elliot for bringing hippies to the town, Mamie Gummer as Lang’s assistant Tisch, and Dan Fogler in a tolerable performance as the theater troupe leader. Other notable appearances include Paul Dano and Kelli Garner as a couple of hippies who take Elliot on an acid trip along with Jeffrey Dean Morgan as Billy’s older brother and Emile Hirsch in a comical though overdone performance as the Vietnam Vet Billy.

Eugene Levy is very good in a very laid-back performance as the farmer Max Yasgur who offers his land to the Woodstock organizers while wowing them with his chocolate milk. Liev Schreiber is excellent as the drag-queen Velma who is very tough and cool while being the one person who helps loosen up Elliot’s parents. Jonathan Groff as Michael Lang is one of the film’s most uninspiring moments as he ends up looking very goofy while not really giving the Lang character anything to do except say “hey man” and “groovy” with just a straight face.

Henry Goodman and Imelda Staunton are great as Elliot’s parents as they bring a lot of humor to their characters. Goodman as the more laid-back father who finds an ally in Velma as they fight off anti-Semitic youths as he also sports some subtle humor to his character. Staunton is even funnier as the Russian immigrant mother who often spouts stories of how she walked from Russia to America with cold potatoes while being the more strict as it’s a remarkable role for the British actress. Demetri Martin is OK as Elliot Tiber as he tries to make the character he plays interesting but is unable to do since he‘s practically a comedy actor. The problem is that Martin isn’t very engaging in his performance as he mostly stares at his surroundings while doesn’t really he seems unsure what to do in some of the performance as it’s a pretty uninspiring performance.

Taking Woodstock is a film that has a lot of good moments but loses steam in the third act that includes a very dull lead performance by Demetri Martin and the lack of footage from the famed Woodstock concert. Audiences who are interested in the history of the famed music festival will find this to be insightful over how it got organized though the actual Woodstock movie is a much better introduction about the festival. For its director Ang Lee, the film is pretty much one of his weaker efforts as he creates something that is very loose and lively though is unable to keep things interesting in the third act. In the end, Taking Woodstock is a fine film from Ang Lee despite some underwhelming moments.

I didn't like this as much as I would have liked to and the plot didn't feel genuine at all, just more of a way for Ang Lee to show how crazy the 60's were and add in a gay angle. Didn't really make that much sense to me really. But Good Review Steven!

I agree that could've toned down some of the gay aspects of the film and focused more on the organization of the festival. Yet, it was still important to acknowledge Elliot's world as he hears about the Stonewall riots which is an important moment in the history gay rights.

Sounds like I did not miss too much by not seeing the film. I may get around to it one day but, after reading your review, I am not in any rush.

@CS-It has its moments so it's not an entirely waste of time. The problem is that when you want to see a film about Woodstock, you need to have footage from that film. They didn't do that and with a very bland performance from Demetri Martin, it was quite dull despite a great supporting cast.