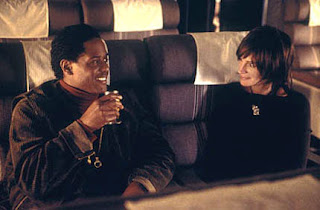 Directed by Steven Soderbergh and written by Coleman Hough, Full Frontal is an experimental film set onto an entire day in Hollywood where people gather around for a birthday party. Featuring a film-within-a-film, the project blurs the line between fiction and reality as it allows Soderbergh to experiment with digital filmmaking. Starring Catherine Keener, David Duchovny, Nicky Katt, Mary McCormack, David Hyde Pierce, Blair Underwood, and Julia Roberts. Full Frontal is a strange but often indulgent experimental film from Steven Soderbergh.

A film produced by a man named Gus is currently underway as starring in the film are Calvin (Blair Underwood) and Francesca (Julia Roberts) about an actor and reporter falling in love during a flight from NYC to Los Angeles. Meanwhile, Gus’s birthday is coming as a screenwriter named Carl (David Hyde Pierce) and his wife Lee (Catherine Keener) are invited. Yet, Carl and Lee are going through their own marital issues as Carl confides in his worker Lucy (Erika Alexander) about what is happening. Lee meanwhile, deals with people who are fired as she takes some pleasure in humiliating fired employees while finding an inflatable globe in her parking spot.

Lee’s sister Linda (Mary McCormack) has been invited to the party as she tries to find love through Internet while working as a masseuse for a hotel as she later meets Lee for lunch. Carl’s writing partner Arthur (Enrico Colantoni) is trying to get a play going as he has to deal with a passionate yet antagonistic actor (Nicky Katt) who is playing Adolf Hitler. With the day going on as Carl’s life is having trouble and Lee going through her own emotional issues as she is having an affair. Linda meets a man named Phil (David Duchovny) who asks for a massage where things get weird as Linda learns who he really is. At Gus’s party, people attend the party except for Carl and Arthur, the latter was uninvited, as something horrifying happens prompting some people to think about their own issues.

The film is about a day in the life of six people as most of them would get together for a party as they deal with things about them. Then there’s subplot of a film within a film where an actor and a reporter going on a flight together where a love letter is found. Then when that subplot moves back into the main narrative, the actors who play the people in the story are shown for who they are as actors with Calvin being more prominent. The main narrative consists of four people each dealing with their own issues with relationships, loneliness, and sex as two of them would go to this party where things unravel along with a big surprise.

Coleman Hough’s script has some intriguing moments in its study of failing relationships and sexual dynamics but its improvisational tone tends to create a story that often lags for the first half of the film. Things do get better in the second half when things begin to unravel while the ideas of reality and fiction also becomes a bit clearer though it’s all part of an experimental approach to storytelling.

Steven Soderbergh’s direction is presented in a varying degree of styles. For the film-within-a-film story entitled Rendezvous, it is presented as a polished film that has the look and feel of a Hollywood film that includes a snazzy score by Jacques Davidovici. Even as it includes the making of another film that Francesca’s character is watching as the film features an appearance from Brad Pitt. Then there’s the stuff with the main narrative where it’s all shot in grainy, digital-video at a time when digital film wasn’t in its more polished stage. Soderbergh’s approach to the main portion of the film is to present it in a mixture of cinema verite along with the compositions and rhythm of the French New Wave. With Soderbergh serving as the cinematographer, under his Peter Andrews alias, he creates a look that is intriguing but often very indulgent.

Things do move very slow throughout the first half as there’s a lot of cross-cutting through each portion of the film from the Francesca/Calvin movie to the individual stories involving the other characters. With Sarah Flack providing a lot of stylized editing including jump-cuts for the main portion of the film, it comes off as a bit tiresome and gimmicky throughout the film. At the same time, because the film doesn’t have a traditional narrative where the looseness of the story goes a little overboard. Soderbergh’s attempt to be improvisational has some moments but he would often shoot things out of focus in an attempted to be stylized. Unfortunately, Soderbergh doesn’t create enough moments to make into a solid and engaging film. While it is a very pretentious film that lacks substance, it is at least a film that tries to stray from the conventions of traditional cinema.

The casting of Debra Zane is pretty good as it features appearances from January Jones as a receptionist, legendary producer Jerry Weintraub as a man who counsels Carl about his career, Rainn Wilson and Sandra Oh as fired employees that Lee humiliates, Erika Alexander as a co-worker of Carl, Tracy Vilar as a friend of Carl’s, Jeff Garlin as an actor who plays a fictional version of Harvey Weinstein, Brad Rowe as a film crew guy that tries to get into a conversation with Francesca, and cameo appearances by Brad Pitt as himself, Terence Stamp as a man on a plane in the Rendezvous portion, and David Fincher as a director making a film-within-a-film.

Nicky Katt is very good as a fiery actor who verbally abuses the people around him while Enrico Colantoni is also good as the playwright Arthur trying to find love online. David Duchovny is excellent in a small role as a guy who feels turned on by a massage as it’s kind of a precursor to the smarmy Hank Moody character he would play in the TV show Californication. Julia Roberts is all right as Francesca where as the actress, Roberts gets a chance to be loose and funny while in the character she plays in Rendezvous, Roberts is her usual charming self. Blair Underwood is stellar as Calvin, an actor who has a lot of charm while often given questions about his own status while dealing with his own sexual consumptions.

Mary McCormack is great as Linda, Lee’s sister who is dealing with her own loneliness while an encounter with a man turns out to be a nightmare as it gets even worse as she ponders about ever finding love. Catherine Keener is pretty decent as the weary yet biting Lee who is dealing with her own issues though it doesn’t have much weight since it’s the kind of performance that’s been seen from Keener from so many films. David Hyde Pierce is the film’s best performance as Carl, a screenwriter/magazine writer dealing with a lot of issues as he ponders about his own loneliness and his crumbling marriage as he goes through a horrible day.

Full Frontal is an interesting though meandering film from Steven Soderbergh. While some might appreciate the film as an experimental piece with digital video, it is a film that will frustrate and bore conventional audiences since it doesn’t have a traditional plot. For fans of Soderbergh, they might be compelled in what Soderbergh was trying to do with digital video as he would go into further explorations that will lead to films like Bubble and The Girlfriend Experience. Full Frontal is not the kind of film that anyone that wants to see a traditional story will see. Still, the film does offer something to those that wants to be challenged and watch a filmmaker like Steven Soderbergh take risks even if some of the ideas don’t work as Full Frontal is still intriguing depending on one’s taste.