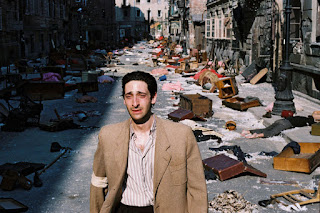 Based on the memoirs of Wladyslaw Szpilman, The Pianist is a film about Szpilman's life where he tries survive the ghettos of Warsaw, Poland during Germany’s occupation in World War II. Throughout all the hardships, starvation, attempted attacks, and punishment, Szpilman’s story of survival and triumph is amazing, especially what was going on for Jews at the time of the Holocaust. Adapted into a script by Ronald Harwood and directed by Roman Polanski, The Pianist is an in-depth look into the Holocaust where Polanski portrays all the characters as human beings including the Jews, Poles, and the Nazis. With a cast led by Adrien Brody as Szpilman in his Oscar-winning performance, The Pianist is a gripping, harrowing tale of survival told by Roman Polanski.

Wladyslaw Szpilman is a Jewish pianist at a recital for a Polish radio broadcast in 1940 whose life is to change because of the ongoing violence following Germany's invasion of Poland. Living with his wealthy family that includes his parents (Frank Finlay & Maureen Lipman), sisters Regina & Halina (Julia Rayner & Jessica Kate Meyer), and brother Henryk (Ed Stopppard), they hope that they can endure once the British and French arrive to help. Instead, they're moved to ghettos as they had to endure the prejudices of German occupation. Wladyslaw tries to get things to help his family as he even bails out Henryk with help from a Jewish officer (Roy Smiles).

With the occupation of the ghettos becoming more trouble and hiding from the Germans, Wladslaw's life is changed when his family are taken to concentration camps as he is left alone in the ghettos. With an old friend in Jurek (Michal Zebrowski), Wladyslaw makes an escape seeking refuge in his friend Dorota (Emila Fox) who gives him a house to stay for two years. When Dorota has disappeared and no word about his family, Wladyslaw uses the piano to comfort him despite his health. Even as he tries to survive against the Germans as he becomes desperate for food one night where he meets a German officer named Hosenfeld (Thomas Krestchmann). Wladyslaw realizes he might be in trouble as he uses his only talent that would save him.

For a film that runs for two-and-a-half hours long might seem a long ordeal to watch for moviegoers. Thankfully for a master filmmaker like Polanski, the pacing and length of the film is attentive in its story not with just strong, intense dramatic moments but also elements of details of the cruelty that was going on at that time. The Oscar-award winning adapted screenplay by Ronald Harwood is filled with a linear and timeline structure that makes sure when did this happen what flaws the characters they have as they’re presented in a human light. It’s not just the Nazi Germans that Polanski wanted to portray as monsters that is already known but he also gives light that it was Polish people as well that were prejudice as well as Jews as they kill their own race just to survive. Polanski’s masterful direction definitely makes his movie not be another Schindler’s List but a film of its own, gripping power.

With Polanski trying to play this film, as true to the story, he makes sure the film doesn’t have an entirely bleak look. With a vast look from cinematographer Pawel Edelman, the film’s look shows elements of grayish colors to convey the bleaker, oppressive tone while there’s elements of sunlight in moments of despair but also in the film’s final moments, a sense of reflection from Wladyslaw Szpilman. In the scenes of battle and violence, they’re very intense with its effects as Polanski tries to play true to the time of the film and the weapons that were used. From the elements of detail in production design, costumes, art direction, and all elements of making a film look like 1940s Poland, Polanski indeed gets it right and with an immensely strong script, he got what he wanted.

The film’s cast is wonderfully used from the roles of Szpilman’s parents and siblings to the array of Warsaw residents including Emilia Fox’s enchanting performance as Dorota. While it’s a cast that includes many people, they all have their moments including the Nazi German soldiers and officers as they play up to the monstrous, vile tone of what they were. The biggest standout in the supporting roles easily is Thomas Kretschmann as Captain Hosenfeld. Kretschmann delivers a subtle performance as the German officer who spared Szpilman’s life with ease and intelligence as he proved that not all Germans were vile and evil.

The film’s central protagonist and probably the best performance overall in the film is Adrien Brody. Prior to this film, Brody was a talented, enigmatic actor who appeared in small indie films like Harrison’s Flowers, Six Ways to Sunday, Steven Soderbergh's King of the Hill and Love the Hard Way to big films like Spike Lee's Summer of Slam and Terrence Malick's The Thin Red Line. In this film, he delivers a gripping, heartbreaking performance as Wladyslaw Szpilman. Brody plays the role with ease and intelligence while not giving up any hope to the film’s character. Brody’s sympathetic performance is the heart of the film while he perfectly mimics the piano playing throughout the film that includes a lovely score from Wojciech Kilar and compositions from Frederic Chopin.

The Pianist is a welcoming return-to-form film from Roman Polanski after a period of films that didn't live up to his revered reputation. It is definitely one of Polanski's most heartbreaking and ambitious film of his career that features a towering performance from Adrien Brody. Audiences wanting a film that is different from a lot of World War II films or Holocaust-dramas will find this to be a very different yet personal take on one of the most harrowing periods in history. In the end, The Pianist is a gripping, harrowing masterpiece from Roman Polanski with a spellbinding performance from Adrien Brody.

Really is an amazing film that should have won Best Picture over that crap Chicago. Although Brody is great, I don’t quite think he should have won that Oscar, maybe could have gone to Cage or Nicholson. But for that year it was anybody’s guess. Great review my homie!

Well, either that or Lord of the Rings: The Two Towers should've gotten the Oscar instead of the overrated Chicago. If Bob Fosse was alive and had done that picture. It would've been racier and more out there. Plus, he wouldn't have gotten as someone as overrated as Catherine Zeta-Jones nor the butterface that is Renee Zelwegger.

As for the Best Actor. I think Brody had the tougher performance though I really think Nicholson would win. It was close as both Brody and Nicholson gave great performances as I think either one of them would be great. Instead, it went with someone that hasn't won before.

I'm glad you pointed out how the cinematographer finds a way to keep the film from looking too bleak. While it is a bleak film, I also find it beautiful and even somewhat hopeful in the way it finds something good amid such horror.

@cinemasights-Thanks James for mentioning the photography. It was something that I remembered about when I saw the film and I liked the way Polanski and Edelman tried to set the mood for the film. I always feel that people who help the director out with their vision should get some notice.