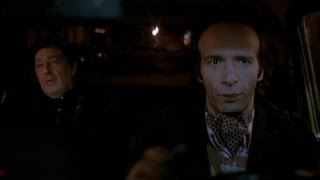 Written and directed by Jim Jarmusch, Night on Earth is a collection of five stories set in five different cities all over the world where a taxi driver and a passenger would engage in various conversations during their brief time together. The film has Jarmusch going into various places with different actors in each city to explore the dynamic between passenger and driver. With an all-star cast that includes Winona Ryder, Gena Rowlands, Armin Mueller-Stahl, Giancarlo Esposito, Rosie Perez, Issach de Bankole, Beatrice Dalle, Roberto Benigni, Paolo Bonacelli, and Matti Pellonpaa. Night on Earth is an extraordinary yet hypnotic film from Jim Jarmusch.

In Los Angeles, tomboy cab driver Corky (Winona Ryder) picks up the rich casting agent Victoria Snelling (Gena Rowlands) at an airport on their way to Beverly Hills. During the ride, the two women discuss the fallacies of men and their differences as Victoria reveals to have night blindness while Corky aspires to be a mechanic. In New York City, a man named YoYo (Giancarlo Espositio) is trying to get a ride to Brooklyn as he gets a cab driver in an East German circus clown named Helmut Grokenberger (Armin Mueller-Stahl). Unfortunately, it’s Helmut’s first day as he doesn’t know the city nor how to drive as YoYo takes over where the two talk while picking up YoYo’s brash sister-in-law Angela (Rosie Perez).

It’s late at night in Paris as a frustrated cab driver (Issach de Bankole) had just been dealing with a couple of awful passengers (Pascal N’Zonzi and Emile Abossolo M‘bo) as he takes a blind woman (Beatrice Dalle). During the ride, the driver is fascinated by the blind woman as she reveals that she can still do things despite her blindness. In Rome, the talkative Gino (Roberto Benigni) wears sunglasses during the late night as he picks up an ailing priest (Paolo Bonacelli). During the ride, Gino reveals his many sins which overwhelms the priest. In Helsinki, Mika (Matti Pellonpaa) picks up three passengers (Kari Vaananen, Sakari Kuosmanen, and Tomi Salmela) where one of them has just had the worst day of life as Mika tells them a story that moves the two awake passengers.

The idea of a taxi as far as a driver and passenger is concerned is this. Driver takes the passenger on a ride. Passenger tells the driver to its desired location. Driver does that and once the destination is reached, driver gets paid and the passenger is at its desired location. Yet in a world as glorious as this, a simple cab drive could be something more as Jim Jarmusch creates five different stories in five different worlds with several different people in different situations. All in different races, nationalities, age groups, and personalities as Jarmusch creates something is truly engaging in the stories that are told.

In each segment of the film, there is something happening between passenger and driver where they all get something out of this little moment in their lives. For the L.A. segment, two different women bond over their frustration towards men along with their different lifestyles. In the NYC segment, an East-German man becomes fascinated by the city and the two people he meets as it’s a great sense of discovery on his first day as a taxi driver. In Paris, a man from the Ivory Coast is fascinated by this blind woman as he seems uninterested in what he’s doing. The segment in Rome has a very talkative man who drives very fast as he ends up overwhelming an ill priest that is strange dark comedy as it’s one of the strangest. The last segment in Helsinki has a driver taking in three passengers where he reveals to them a sad story that reveals that there’s always something worse from happening.

The script that Jarmusch creates is very loose as each segment is given enough time to develop the relationships and the stories told in these segments. In his direction, Jarmusch goes for the same kind of compositions of each segment to capture the driver and passengers with the camera always in front of the car. Yet, he also brings something different to the look and tone of each segment as some are light-hearted while some can seem grim and entrancing. Jarmusch keeps each segment and fresh so each can bring something different to the table. The film and each segment is preceded with a shot of five clocks where the camera zooms towards the clock with the city’s name above and a globe to reveal where what city is to be told.

Throughout the entirety of the film, each segment opens with a look of the city at night in a montage and a cab to introduce the driver, with the exception of the NYC segment, for each segment. During the entirety of the segments, shots of the cities at night are taken place to reveal what locations the driver and passengers are at. The overall approach to Jarmusch’s direction is very stylish yet intimate portrait of an entire night on earth in five different cities with different people musing about the world around them. What Jarmusch creates is a truly exciting and entertaining film that is unconventional yet engrossing in its simplicity.

Cinematographer Frederick Elmes does a wonderful job with the film‘s colorful cinematography from the evening look early in the Los Angeles airport scene to the colorful lights in New York and Los Angeles. Elmes’ work adds a wonderful beauty to the cities with blue lights for the Paris and Helsinki scenes to more intimate settings for the scenes in Rome. Editor Jay Rabinowitz does a great job with creating some stylish cuts for the film while maintaining a fascinating rhythm for many of the conversation scenes that occur in the film. Rabinowitz also keeps a tight pace for each segment at around 20-25 minutes in total to bring enough moments for each story.

Sound designer Anthony J. Ciccolini III does an excellent job with the sound to capture the differing atmospheres of each city along with the intimacy of the cab conversations between the characters in the film. The film’s music by Tom Waits is superb as it is a wonderful mix of jazz and folk that includes different instruments to play to each city. Featuring a few songs written by Waits and wife Kathleen Brennan, Waits score is definitely a highlight of the film as the rest of the soundtrack includes additional music pieces from Davie Allan and Blue Cheer for the L.A. segment.

The big ensemble cast is truly magnificent as each segment provides something different for the film. In very small roles include Lisanne Falk as a manager for band that Corky had brought in the L.A. segment while Pascal N’Zonzi and Emile Abossolo M‘bo are good as the two passengers who annoy the driver in the Paris segment. In the Helsinki scenes, Tomi Salmela is good as the drunk passenger who is passed out while Kari Vaananen and Sakari Kuosmanen are excellent as the other passengers who starts to befriend the cab driver Mika following his story. Matti Pellonpaa is amazing as Mika, the Helsinki cab driver who maintains a stoic approach to his performance as he holds his emotions together during the drive. Paolo Bonacelli is wonderful as the ailing priest who is forced to listen to his driver’s confessions while Roberto Benigni is hilarious as the talkative Gino whose confessed sins prove to be too much in an otherwise dark but funny segment.

Beatrice Dalle is brilliant as the blind passenger who can feel things around her despite her blindness while Issach de Bankole is superb as the quiet driver who is fascinated by the presence of his blind passenger. Rosie Perez is very funny as the brash Angela who spouts all sorts of profanities towards her brother-in-law while being a bit nice towards Helmut. Giancarlo Esposito is also funny but charming as YoYo who tries to help Helmut about being a cab driver and showing him New York City while Armin Mueller-Stahl is phenomenal as the East German cab driver on his first day in amazement on the world around him. Winona Ryder and Gena Rowlands are spectacular as the two different women in L.A. who share their disgust about men while bonding over their differences in low-key but fun performances.

Night on Earth is a fascinating yet magical film from Jim Jarmusch. Armed with a diverse yet exhilarating ensemble cast of actors and in five different locations. It’s a film that truly chronicles the idea of how big the world is and despite the different nationalities, races, genders, and personalities shown in the film. These characters all will have a brief experience that is profound in a world as vast as this one. In the end, Jim Jarmusch creates a lively yet exciting film with Night on Earth.