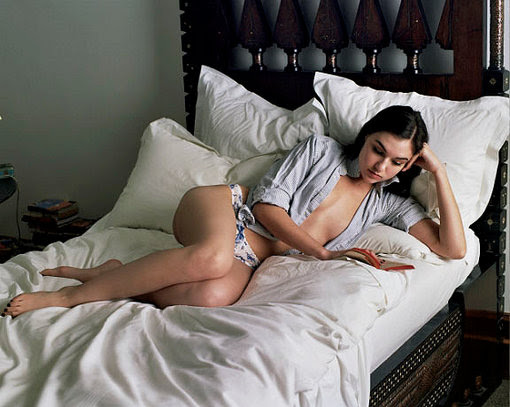 Directed by Steven Soderbergh and written by Brian Koppelman and David Levien, The Girlfriend Experience is about a high-class Manhattan call-girl whose profession is hit with the financial crisis of late 2008 while dealing with her own personal life. An experimental film that is shot with the RedOne digital camera for $1.3 million, it is a film that has Soderbergh taking on the conventions of traditional film narrative. Starring Sasha Grey, Chris Santos, Mark Jacobson, and Glenn Kenny. The Girlfriend Experience is a decent though somewhat pretentious film from Steven Soderbergh.

Christine aka Chelsea (Sasha Grey) is a high-price escort who goes from client to client where she is paid large amounts of money to be a girlfriend for a night and have sex with them. Yet, Chelsea’s lifestyle of expensive clothes and fine taste is being hit by the financial crisis on the eve of the 2008 presidential election where clients are having a hard time paying for her services. Chelsea realizes that her gigs to be an escort is in financial trouble just as her boyfriend Chris (Chris Santos) is trying to reach his goal to be a high-priced personal trainer.

With Chris set to go out to Las Vegas with some friends with business in mind, Chelsea is offered various deals that would help her out. Yet, she is threatened by the presence of a new, younger escort named Tara (Caitlyn Lyon) as she tries to make some moves. Turning to the Erotic Connoisseur (Glenn Kenny) for help, Chelsea finally gets a high-paying gig near upstate New York though Chris doesn’t like the idea as he has issues with her work which he’s been silent about till this moment. Even as Chelsea is talking about her life and work to a journalist (Mark Jacobson).

The film is about a high-class escort whose line of work is being hit by realities that are threatened by a national economic crisis where he clients can’t really use her anymore. In turn, she has to find ways to make money and save so she wouldn’t have to deal what is ahead once the Presidential election is over while maintaining a relationship with her boyfriend whose career is going up. Yet, the film is told through different perspectives as the escort is writing about her clients and what they do as a book of records while talking to a journalist about her work. Meanwhile, it cross-cuts with Chris’ flight to Las Vegas as he’s surrounded by men talking about politics, the economy, and their own love lives.

The script does have some intriguing moments of character study as well as the motivation of its characters. Yet, the subject of the 2008 financial crisis gets a bit overwhelming where it tends to meander the story a bit. At the same time, scenes where the story shifts from Chelsea’s own story to Chris’ own story gets pretty repetitive and meandering during the first act until it starts to pick up the pace during the second act.

Soderbergh’s direction is very engaging from the way he keeps things detached in the things that is happening with the characters to some close-ups as the characters deal with their own situations. There is a stylish approach to what Soderbergh is doing as he also serves as the cinematographer and editor in his respective alias of Peter Andrews and Mary Ann Bernard. The look throughout the film has a very chilling look for a lot of the scenes in New York while the nighttime scenes represent something more exotic as Soderbergh’s editing also has a leisured pace while utilizing jump-cuts to bring a stylistic flair to the film.

While there is a lot of interesting work, Soderbergh does sometimes linger things for too long where the back-and-forth montages of Chelsea and Chris’ respective storylines gets repetitive after the first fifteen minutes. At the same time, Soderbergh’s emphasis on the subject of the financial crisis from other characters become overbearing where the film is supposed to be about this woman dealing with it instead of all of these comments about what is happening. Despite some flaws in the storytelling and Soderbergh’s emphasis to experiment with ideas, he does create a film that is very intriguing about a woman dealing with a bad economy.

Art director Carlos Moore does some excellent work with the look of Chris and Chelsea‘s apartment along with the homes of the clients that Chelsea goes into. Costume designer Christopher Peterson does a great job with the dresses and clothes that Chelsea wears to maintain her high-class escort status. Sound editor Larry Blake does a really good job with the sound work to overlap a lot of the dialogue that happens when Chelsea and Chris talk about their work in other scenes along with the surrounding of New York City. Music composer Ross Godfrey creates a dazzling score filled with dreamy ambient music with some driving rock and a hypnotic drum piece that is played live while the soundtrack consists of street music ranging from folk to percussion-based music.

The casting by Carmen Cuba has some moments as there is some good performances from Phillip Eytan as a client, Caitlin Lyon as a rival escort, Glenn Kenny as the Erotic Connisseur who helps Chelsea with her work, and Mark Jacobson as the journalist interviewing Chelsea. Chris Santos is OK as Chris where he is just low-key throughout the film though the big emotional scenes isn’t very good since it doesn’t feel right and natural. Finally, there’s Sasha Grey in the role of Chelsea where Grey has her moments when she is just talking and be silent in the film. Yet, she isn’t very engaging at times where she just often has this sleepy look throughout the film. It’s a mixed bag where it’s not really bad but it’s not that great either as Sasha Grey kind of pulls off something decent.

The Girlfriend Experience is a pretty good though very arty film from Steven Soderbergh. While it’s one of Soderbergh’s better experimental films, it does have moments where it has a narrative that is a bit conventional though it’s very unconventional. Yet, it’s a film where its focus is on Sasha Grey that doesn’t entirely work despite a few moments. In the end, The Girlfriend Experience is a fine experimental film from Steven Soderbergh.

It was worth watching at the time for being amongst the first films shot with the Red One. and it's not as bad as most people say but overall a forgettable effort.

It is forgettable despite some moments in the film. I think Che which was shot mostly with the Red One is a triumph. Even as the camera was in its early stage.