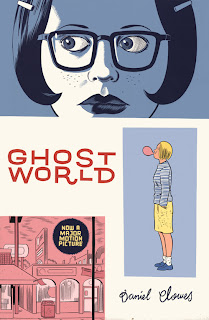 Written by Daniel Clowes, Ghost World tells the story of two young teenage girls who wander around their town bored by their surroundings. With their growing cynicism towards the world, one of the girls meets a cartoonist whom she admires which leads to the disintegration of the two girls’ friendship. Originally a comic book with eight issues that eventually became a graphic novel that was released in 1997. It is a coming-of-age story that strays from the convention of a lot of comic books as encounters themes of alienation and teen angst as it is definitely a fantastic graphic novel from Daniel Clowes.
Enid Coleslaw and Rebecca Doppelmeyer are two teenage girls that had just graduated high school as they look at the town they live in for the summer. Enid recalls her strange meeting with a strange man named John Ellis and a former priest, who supposedly carries child pornography, as she and Rebecca watch a lame comedian. Enid later tries to sell some stuff at a garage sale as she talked about a man she met at a diner they eat while showing Rebecca an aging couple that she believes are Satanists. When Enid decides to go punk, while trying to find some guy only to realize he’s a creep. Later, she recalls to Rebecca about the time she lost her virginity to some dude that turned out to be an unpleasant experience.
When Enid and Rebecca discover a diner that claims to be a vintage 50s diner, they realize the place is more modern than set in the 1950s while looking at a newspaper ad as they play a prank on a man. With their friend Josh reluctantly watching, the prank ends up being very humiliating as Enid and Rebecca feel guilty. When a man named Norman who often sits at an out-of-service bus stop disappears, the two girls look through a photo album as Enid becomes obsessed with finding a record. Yet, Enid’s disdain towards the world and her obsession with who should have sex with Josh as a wedge is happening between her and Rebecca as they move into different directions
Whereas most graphic novels and comics are always about superheroes and vigilantes, Daniel Clowes brings the world back to earth in this exploration of two girls living in a humdrum town. During this eight-part series of stories, Enid and Rebecca dwell into their surroundings after high school as they meet various people in their town. From an antagonistic man named John Ellis to a mysterious guy named Bob Skeetes that Enid looks for. The eccentrics that Enid and Rebecca encounter are the only things that remain interesting in a world that’s become surrounded by commercialism. Both girls are alienated though Rebecca isn’t as alienated since she gains more attention from boys though she wonders if they really like her.
During the course of the story, which is episodic in its narrative, the relationship between Enid and Rebecca changes throughout as it starts to disintegrate in the last two parts of the story. Largely because Enid feels out of place with the world while there’s pressure for her to go to school and succeed. In reality, Enid isn’t keen on conforming to what people expect from her as she desires to just go away and never return. Rebecca meanwhile, believes there is something out there while the attraction towards Josh is something she needed to fulfill the disintegrating relationship she has with Enid. It’s where Rebecca starts to step out of her own and not kind of be a foil for Enid in their exploration about their surroundings.
Daniel Clowes’ approach to developing the relationship between Enid and Rebecca as well as their own personal journey is very unique. Even as it’s about girls which is something very different in a world where most stories about comics and graphic novels are about men. Yet, Clowes make its universal about these girls and their alienation with the world as they try to deal with the people they encounter. It’s a very fascinating story as Clowes creates what is truly a compelling yet touching coming-of-age story.
Ghost World is definitely a superb yet entrancing graphic novel from Daniel Clowes. Anyone that wants a story that is more dramatic and isn’t about superheroes will see this as one of the essential dramatic graphic novels. For fans of the 2001 film adaptation that has never read the graphic novel will definitely see where some of the ideas came for the film itself. In the end, Ghost World is a haunting yet mesmerizing story from Daniel Clowes.
Related: Ghost World - Ghost World OST - Ghost World (screenplay book) - Ghost World 10th Anniversary Essay
© thevoid99 2011
Posted by thevoid99 at 12:27 PM

Clowes is an amazing force art and writing wise. There is really no one out there like him.

You've definitely made me want to read Ghost World again, which I last read about a year ago now.

It's the perfect comic to follow me growing up, just as Enid and Rebecca do.