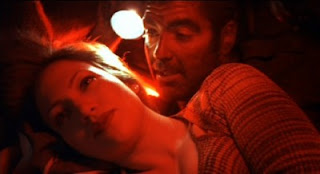 Based on Elmore Leonard’s novel, Out of Sight tells the story of a bank robber and a U.S. marshal who fall for each other as the robber plans a big robbery on a businessman. Directed by Steven Soderbergh with a screenplay by Scott Frank, the film is a crime movie with a sense of humor and sex appeal as it marks Soderbergh’s first foray into mainstream filmmaking following a period of unconventional films. Starring George Clooney, Jennifer Lopez, Ving Rhames, Steve Zahn, Don Cheadle, Dennis Farina, Catherine Keener, Isaiah Washington, and Albert Brooks. Out of Sight is an entertaining yet stylish film from Steven Soderbergh.

After another bank robbery that was almost successful, Jack Foley (George Clooney) is back in prison. This time in Florida, Jack calls his ex-girlfriend Adele (Catherine Keener) to contact a couple of his friends in Buddy (Ving Rhames) and Glenn (Steve Zahn) to help him out on an escape. Meanwhile, U.S. marshal Karen Sisco (Jennifer Lopez) is celebrating her birthday with her dad (Dennis Farina) as she goes to the Florida prison for some business. Instead, she tries to stop an escape only to be stopped by Buddy as she and Jack are put in a trunk where an attraction ensues. During the getaway, they meet up with the Glenn who ends up screwing things up when he takes Karen where she nearly got injured.

With Jack and Buddy hiding out and planning to go to Detroit to rob a businessman named Ripley (Albert Brooks) whom they knew at another prison a few years ago with Glenn. It was there that Jack and Buddy learn about some diamonds Ripley had where he was friends with another convict named Maurice (Don Cheadle). Jack is still infatuated with Karen whom he calls one day as she manages to capture an escaped convict named Chino (Luis Guzman) to be part of a task force with the FBI. Yet, Jack and Buddy make another escape with Karen still carrying feelings towards Jack. Karen decides to go to Detroit to stop Jack while learning that Glenn is also there but with Maurice and his two goons in Kenneth (Isaiah Washington) and White Boy Bob (Keith Loneker).

In Detroit, Jack learns that Karen is there as the two meet again as both know what they’re going to do. When Maurice decides to change the plans for the robbery, things get a little crazy as Karen decides to follow leading to a showdown between her and Jack.

For a bank robber, the job is tricky as the robber has to get in and steal cash, and get out. A guy like Jack Foley isn’t a typical bank robber since he doesn’t use a gun but rather his charm and intellect. Unfortunately, he can’t get the job done once he’s out of the bank. When he and his friend try to make a big robbery in Detroit with some vicious criminals, the only thing that is stopping Jack isn’t the dangerous criminals and things that can go wrong. It’s his heart and it’s for the woman who is supposed to the enemy in a U.S. marshal named Karen Sisco.

The film is in a way a battle of wits and of the sexes but in a more playful yet casual manner. Jack is a guy who is very smart in the way he deals with crimes and how he plans things. Karen is a woman who is very tough and is willing to take down criminals with style. When these two people meet, sparks happens as the two are both conflicted about what to do with each other. Among the people who watch this are Buddy and Karen’s dad who are concerned about this wondering why Karen didn’t arrest them or why Jack didn’t do anything to confront her.

Scott Frank’s screenplay is very playful in the way he develops and creates fully-fleshed characters along with some witty dialogue. The humor and use of flashbacks for the film creates a story that has a very unconventional rhythm and tone. A lot of it is due to the fact that it sets up this big heist at a man’s house to find the diamonds. Yet, there’s some stops and bumps on the way for Jack and Buddy as they have to deal with Glenn, who is essentially a fuck-up, along with Maurice who is an ex-boxer with a vicious streak. Frank’s script is a highlight of the film as it helps elevates the film’s stylized direction of Steven Soderbergh.

Soderbergh’s direction is another highlight of the film for the way he presents the film by straying from the conventions of a crime film and the infusion of a love story in the film. Soderbergh use of hand-held cameras and stylish shots while also presenting things in a straightforward manner. Soderbergh’s unconventional direction goes from the way he cuts to the present narrative to the flashbacks while creating a wonderfully rhythmic montage of a smoldering yet exotic scene where Jack and Karen get it on. Soderbergh also creates different moods for the varied locations of the film such as Miami and Detroit where Miami is lively and Detroit is more eerie. Overall, Soderbergh creates what is definitely an engaging and fun crime film.

Cinematographer Elliot Davis does a phenomenal job with the film‘s photography from the bluish exterior look for the daytime scenes in Detroit to the more colorful shots of Miami. The nighttime scenes interior and exterior are presented in a more natural look while the love scenes have a more softer look to bring something that is truly seductive. Editor Anne V. Coates does an amazing job with the editing as she adds a lot of style to the film in its rhythm from jump-cuts, freeze-frames, and dissolves to keep things moving. Even the love scene where the montage of dialogue and undressing really gives the film some amazing movement as it’s the technical highlight of the film.

Production designer Gary Frutkoff, along with set decorator Maggie Martin and art director Phillip Messina, does some excellent work with the set pieces such as the hotel room that Jack and Karen make love in to the Miami places the characters interact in. Costume designer Betsy Heimann does a very good job with the costumes from the stylish clothes that Karen wears to the colorful Miami clothing that Adele wears. Sound editor Larry Blake does a brilliant job with the sound from the intense, active moments of the film such as the escape to the montage where dialogue overlays some of the things happening in the love scene. The film’s score by David Holmes is another highlight of the film for its snazzy, laid-back score that is a mix of jazz and electronic music to play up the film’s sense of style while the rest of the soundtrack is a mix of jazz and soul music.

The casting by Kathy Driscoll and Francine Maisler, with Sonya A. Avakian for the Detroit scenes, is superb as the film features an array of appearances from Viola Davis as a friend of Kenneth, Nancy Allen as Ripley’s mistress, Paul Calderon as a FBI agent in Detroit, Wendell B. Harris Jr. as Karen’s superior, and Michael Keaton in a cameo appearance as Ray Nicollette from Quentin Tarantino’s adaptation of Elmore Leonard’s Rum Punch called Jackie Brown. Other notable yet memorable appearances includes Catherine Keener as Jack’s ex-girlfriend Adele, Luis Guzman as a convict named Chino, Keith Loneker and Isaiah Washington as two of Maurice’s henchman, and Steve Zahn as the unreliable screw-up Glenn.

Dennis Farina is really good as Karen’s dad who has a very funny scene where he talks to Ray about an incident involving a convict and a woman while Albert Brooks is also good as the timid yet intelligent Ripley. Ving Rhames is superb as Buddy, Jack’s partner-in-crime who likes what he does but also has a devotion towards his sister as he is the conscience of sorts of the film. Notably as he brings some subtle humor to his performance as it’s really one of the standouts in the film. Don Cheadle is great as Maurice, an ex-boxer who takes charge over the robbery while bring ruthless as Cheadle brings an energetic performance with some humor for a very dark characters.

Finally, there’s George Clooney and Jennifer Lopez in magnificent performances for their respective roles as Jack Foley and Karen Sisco. Lopez’s calm yet cool approach to Karen Sisco is truly the best performance of her career where she proves she can be tough and engaging in quieter moments. Yet, she also oozes sex appeal as it’s the performance that made her into a superstar. Clooney’s performance as Jack Foley is a real breakthrough as it confirms what is expected from Clooney in terms of charm and sex appeal. At the same time, Clooney proves to be very funny and very direct when he is in business mode. Clooney and Lopez together are brilliant as the two have wonderful chemistry that is very restrained and full of wit as they are the highlight of the film’s ensemble cast.

Out of Sight is a remarkable yet enjoyable film from Steven Soderbergh featuring a top script from Scott Frank and fantastic performances from George Clooney and Jennifer Lopez. In terms of the films Soderbergh has done in his career, this is definitely one of his most accessible as well as one of his most entertaining. Even as its use of editing and shooting styles give something that art-house fans can enjoy. In the end, Out of Sight is a spectacular crime film from Steven Soderbergh and company.