Originally Written and Posted at Epinions.com on 6/27/05 w/ Additional Edits. 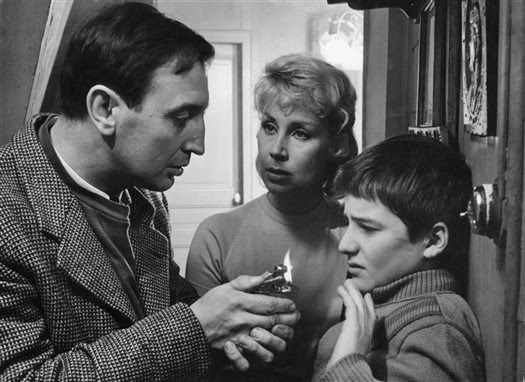 Throughout the emergence of cinema, international cinema has always been dominated by Americans. After World War II, that all began to change as Europeans began to take over. The Italians begin to a new wave of neo-realism while Sweden found a hero in Ingmar Bergman. In France meanwhile, French cinema was going under a new re-emergence since the end of the World War II but amidst the numbers of American films that were coming, only a small group of film critics from the magazines Cahiers du Cinema were starting to feel oppressed by not just the lack of quality in American films but the lack of personal introspection in their native films. Thus, a new wave was about to emerge and leading the pack was Francois Truffaut.

Born in February 6, 1932, Truffaut along with the likes of Jean-Luc Godard, Claude Chabrol, Alain Resnais, Jacques Rivette, Jacques Demy, and Eric Rohmer were writing serious, scathing reviews that attacked the farcical of American cinema with their mentor Andre Bazin. Though Truffaut left the magazine over tastes with Bazin, his reviews and knowledge had made him notorious to the point that the Cannes Film Festival would ban him because of his reviews. After making a few shorts, Truffaut was ready to make his feature film, an autobiographical story of a young boy who is misunderstood by the world as he rebels against authority in Les Quatre cents coups (The 400 Blows).

Written with Marcel Moussy, Les Quatre cents coups is a drama about a misunderstood child named Antonie Doinel. Feeling troubled by his bickering parents and tormented by an insensitive teacher, Doinel rebels and tries to live life on his own terms through watching films and getting into trouble. Playing the troubled kid is Jean-Pierre Leaud who brings a youthful study of a kid who isn’t sure why he does all the things he does and why he defies his parents. Based on Truffaut's own life, the film is one of the first of many landmark features of the French New Wave that would change the face of not just French cinema but also International cinema in the years to come. Also starring Robert Beauvis, Claire Maurier, Albert Remy, Guy Decomble, Patrick Auffay, with guest appearances from Jeanne Moreau and Jacques Demy. Les Quatre cents coups is a brilliant, whimsical drama from one of French Cinema's most enduring figures.

For the young Antoine Doinel, he is really a misunderstood child only understood by his best friend and schoolmate Rene (Patrick Auffay). In school, Doinel often gets in trouble, even if he hadn't done anything in front of his insensitive, strict teacher (Guy Decomble) who Antoine often calls Sourpuss. Even one of Antoine's schoolmates would often get him in trouble as Rene often calls that kid a rat. At home, Antoine's life isn't any better since the behavior of his parents would often shift from love to hate. On this particular day, it's his mother (Claire Maurier) that would be mean to him for not getting flour for dinner and love from his father (Albert Remy).

With Rene, Antoine skips school to go to the cinema and go to a funfair where they would be seen by Antoine's mother with another man and the rat kid who often wears goggle-like glasses. Antoine and his mother never said anything until the kid tells Antoine's father that he missed school and Antoine got into trouble. Forced to be out of the house, Antoine would live in a printing plant for the night where he would go out to steal milk or help a woman (Jeanne Moreau) to find a dog. Antoine returns to school where his mother takes him home after making a deal with the schoolmaster (Robert Beauvais). Antoine's mother asks him to be good by writing an essay for his class and if it makes it to the top 5, she gives him 1000 Francs. Antoine gets an idea while his father cools down a bit as he takes the family to the cinema.

Antoine seems to make good but his teacher claims the essay he wrote is a copy of the works of Balzac which Antoine denies. Antoine runs away again with the help of Rene as he lives secretly in an unused room of Rene's home. The two decide to cause more trouble and Rene has an idea to steal something that would make them a lot of money. Antoine suggests his father's typewriter but after a sale falls apart, Antoine tries to return the typewriter only to be caught by his father. Being taken to a policeman (Jacques Remy) and the commissioner (Folco Jacques Monod), Antoine goes to jail as the commissioner suggests that he is to be taken to a detention center for young juveniles. Antoine tries to understand his own behavior through a psychiatrist while revealing a dark family secret as his mother makes a brief visit with Antoine pondering his own destination.

While most coming-of-age stories seem to have some formula of a child growing up, in Truffaut's approach, it's more of a study of behavior and motives as he is trying to figure out what he did wrong in his own life. It's Truffaut commenting on his own childhood with the help of a confidant in Marcel Moussy as they try to figure out what good is in young Antoine Doinel and why does he do all of these bad things to his parents. The story from Truffaut and Moussy is very realistic in how a kid can be affected by bickering parents, an insensitive teacher, and everything else with only another kid at his side to find some answers and trouble. It's a very powerful story with an ending that really leaves things hanging but that is another story.

If the script that Truffaut and Moussy has concocted is the source of the film, there’s also Truffaut's directing style which is a bit documentary-like but also featuring some of the traditional frameworks of modern-day cinema. Using his script as a source, Truffaut goes for shots as if he is another person watching while there's some great shooting sequences including the famous scene of Doinel in the spinning ride where the camera moves in circles. There's also that final shot that is often imitated with that final freeze-frame shot and the word Fin (The End) appearing.

Helping Truffaut in the directing is cinematographer Henri Decae for bringing a natural, somewhat grainy black-and-white look to the film. With art director Bernard Evein, the film has a very realistic look on the locations and street life of Paris while editor Marie-Joseph Yoyette gives the film a rhythmic, jump-cut editing style on some sequences with traditional dissolving cuts. Finally, there's Jean Constantin's playful, innocent score that gives the film a sense of youthful vibrancy and melancholy in the dramatic sequences.

With a wonderful cast that includes standout performances from the children plus memorable cameos from Truffaut, Jacques Demy, and Jeanne Moreau, who would star in Truffaut's 1962 film Jules & Jim. The performances of Claire Maurier and Albert Remy as Antoine Doinel's bickering parents are wonderfully complex as loving yet flawed parents who don't understand their son while are desperate to make him good only to be destroyed by a family secret. Maurier gives the more memorable of the two, especially in the film's final moments when she confronts her son. Robert Beauvis and Folco Jacques Monod are memorable in their appearances as the respective authority figures of schoolmaster and commissioner who aren't mean but are trying to understand Doinel. The two best supporting performances come from Guy Decomble as the insensitive teacher with his cruelty to the children and Patrick Auffay as Rene, the only confidant that Doinel has who too has an affinity for trouble and rebellion but unlike Doinel, he seems to come from a more comforting home than the one that Doinel has in a wonderful, calculating performance.

Finally, there's the young Jean-Pierre Leaud who gives a brilliant performance in the complex role of Antoine Doinel. Leaud gives the kid a bit of sympathy but also a bit of sleaziness. Leaud makes sure that Doinel isn't a good kid or a bad kid but he's a bit of both. He makes Doinel someone many kids can relate to, he hates school, his parents are a mess, he has an awful teacher, and he can’t stand authority. Yet, he has dreams and escapes that every kid has. By the time the film goes, we see Leaud trying to understand this kid as he is playing him and wondering, why is he unhappy, why does he do all of these things. It's truly a mesmerizing performance.

When Les Quatre cents coups came out at the 1959 Cannes Film Festival, removing the ban off of Truffaut, the film was an international hit as Truffaut won Best Director while the film helped open the door for brand new, introspective films to come as part of the French New Wave. With Truffaut also contributing to Jean-Luc Godard's A Bout de Souffle, The film's wide acclaim would help get across to America where Truffaut and co-writer Marcel Moussy both received Oscar nominations for Best Original Screenplay.

Truffaut would create many more films to come including Jules & Jim, Shoot the Piano Player, Day for Night, Wild Child, The Last Metro, and Two English Girls while appearing in Steven Spielberg's 1977 film Close Encounters of the Third Kind before his death in 1983. Truffaut would continue the story of Antoine Doinel with Leaud in the role including the 1962 short Antoine et Colette, 1968's Stolen Kisses, 1970's Bed & Board, and 1979's Love on the Run. Leaud meanwhile continues to find success as an actor appearing in films for Bernardo Bertolucci and Jean-Luc Godard while being an icon in French cinema when in 2003, he played himself in the recreating of a speech in Bertolucci's tribute to French cinema in The Dreamers.

While a bit more conventional but less stylized than Godard’s debut film A Bout de Souffle, Les Quatre cents coups is still a landmark film from the French New Wave. Thanks to Francois Truffaut's mesmerizing directing and storytelling and the performance of Jean-Pierre Leaud, this film is a wonderful introduction to French Cinema and the works of Truffaut. More than 40 years since its release, this film still holds up for its approach to storytelling and character study as the movie still resonates with an audience, notably its idea of youth. With Les Quatre cents coups, it's a great place to start for those interested in French Cinema.

Francois Truffaut Films: Shoot the Piano Player - Jules & Jim - Antoine & Colette - The Soft Skin - Fahrenheit 451 - The Bride Wore Black - Stolen Kisses - Mississippi Mermaid - The Wild Child - Bed and Board - Two English Girls - Such a Gorgeous Kid Like Me - Day for Night - The Story of Adele H. - Small Change - The Man Who Loved Women - The Green Room - Love on the Run - The Last Metro - The Woman Next Door - Confidentially Yours