Originally Written and Posted at Epinions.com on 9/11/07 w/ Additional Edits. 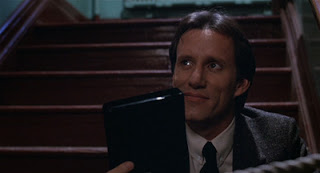 Written and directed by David Cronenberg, Videodrome tells the story of a local UHF TV station president whose desire to get controversial material for his channel gets the best of him when he meets a radio therapist while discovering a new underworld of snuff films. Immediately, his life changes as he encounters hallucinations while changes to his bodies emerge. A mix of horror, shock, and sci-fi, this film is considered one of Cronenberg's quintessential films. Starring James Woods, Deborah Harry, Sonja Smits, Peter Dvorsky, Leslie Carlson, and Jack Creley. Videodrome is a surreal yet fascinating film from David Cronenberg.

In his continuing search to find new material for his UHF TV channel, Max Renn (James Woods) seeks to find anything that is extreme in both sex and violence. Despite a following that is growing, so is his detractors where one day, he is a guest at TV talk show by host Rena King (Lally Cadeau). Also in the show is a radio therapist named Nicki Brand (Deborah Harry) and a TV professor named Brian O'Blivion (Jack Creley) who appears via TV. During the discussion, Renn asks Brand if she wants to go out on a date. During his work for new material, he turns to his technician Harlan (Peter Dvorsky) where he shows him a dark, snuff-like program known as Videodrome.

Introducing Brand to a bootleg tape of the program, she is impressed since she has a love for sexual mutilation. Wanting to learn more about the show, it's based on Pittsburgh as he turns to his colleague Masha (Lynne Gorman) for information that leads him to O'Blivion. Visiting a mission center run by O'Blivion, he meets O'Blivion's daughter Bianca (Sonja Smits) who tells him more about Videodrome. Nicki decides to leave for Pittsburgh to audition for the show where suddenly, things get strange after watching another tape that was sent by O'Blivion to Renn's secretary Bridey (Julie Khaner). Suddenly, O'Blivion is on the tape telling him about Videodrome and its dark forces as the hallucinations Renn sees start to emerge.

With Bianca telling him that her father is already dead, she sends him more tapes about the dark phenomenon as it leads to the show's producer Barry Convex (Leslie Carlson). Convex contacts Renn through his optical services where he helps him get more in touch with his hallucinations. The world of reality and fiction is blurred as he turns to Harlan for help after seeing a dead body. When he suddenly learns what Convex wanted, Renn starts to lose control of his self turning to Bianca for help. Realizing what he must do, he knows that he has to destroy Videodrome and all of its sources.

Given Cronenberg's strange, creepy vision, the film is about extremes in many forms whether it's entertainment or technology. Yet, the film is really about a man's desire for extremes and how he enters an underworld that becomes too much for him. The script that Cronenberg creates is filled with suspense and horror where he introduces his audience to the world that is Videodrome. For the second act, the film becomes a continuing exploration with a twist concerning Convex as it leads to a horrifying third act that involves a open-like slit on Max Renn's stomach that looks like a female genital. Yet, it's Cronenberg's direction that is the highlight for all of its depiction of extreme sex and violence though the violence isn't like extreme action films. Instead, it's shown to disturb audience given Nicki Brand's love for sexual, self-mutilation.

With the help of special effects master and make-up artist Rick Baker, the film is definitely like no other with video tapes moving, TVs acting as if they're more than machines. Cronenberg makes sure the audience is either uncomfortable or excited depending on their tastes. At the same time, he goes further into the concept of man versus machine and how in the third act, Max Renn loses control and has become controlled by the machine. The result of all of these ideas that comes from Cronenberg's head proves to be a film that is truly from the mind of an original.

Cronenberg's then-longtime cinematographer Mark Irwin brings a wonderful look with his camera, notably the exterior scenes with shadows in Renn's room as well as the exteriors shot in Toronto. Irwin's work is brilliant to convey the film's eerie tone while longtime art director Carol Spier creates a unique look to the film. The Videodrome set with red walls and such are very lively while the mission is unique for its look of cubicles and such. Costume designer Delphine White creates a more casual look to the film with the exception of the red dress that Debbie Harry wears along with a showgirls clothing for one of the film's sequences that featured additional work from Cronenberg's sister Denise.

Editor Ronald Sanders, another key Cronenberg collaborator, creates a pacing, cutting style that plays to the film's suspense and tone that is superb. Even in how it plays to the hallucinations of Renn. The contribution of Rick Baker's work in make-up and such is a highlight from the way it plays like a horror film while creating wonderful production designs for a TV set, a videotape, and the genital-stomach slits. Sound editor Peter Burgess helps with the film's suspense by creating sounds that would scare an audience. Longtime composer Howard Shore brings an ominous score led by synthesizers to convey the film's creepy tone and suspense.

The casting is wonderfully superb and memorable with performances from Lynne Gorman, Julie Khaner, and Lally Cadeau as the different colleagues of Renn with Cadeau as a TV talk show host. Peter Dvorsky is excellent as the laid-back technician Harlan who always call Max "padrone" while revealing him secrets that involved Videodrome. Jack Creley is excellent in the role of Brian O'Blivion who helps Renn in unveiling the Videodrome phenomenon with Sonja Smits in a very memorable supporting role as O'Blivion's daughter. Leslie Carlson is great as the shady Barry Convex who reveals to be the man behind Videodrome with his intentions of hoping to take over the world.

New wave singer Deborah Harry of the band Blondie gives a wonderful, creepy performance as therapist Nicki Brand. Known for her unique sex appeal, Harry uses it to convey the dark nature of her character as well as her love for self-mutilation. The presence she brings is terrifying while proving to be a capable actress in playing a complex role that is small but worth remembering. In one of his early leading roles, James Woods is brilliant as the extreme-loving Max Renn. Woods manages to bring an intensity to his performance that is part of his trademark as well as what makes audience enjoy him so much. He definitely carries the film while proving his range whether he's being quiet or being a bit humorous. There's never a dull or bad moment he gives in the film's performance proving that he's one of those can't-suck actors.

When the film was released in early 1983, it proved to be a cult hit as since its release more than 20 years, the film has proven to be a touchstone for David Cronenberg. Even in the industrial music scene, the film had been sampled by many acts including Skinny Puppy while its dark imagery and extreme, sexual content has also brought inspiration. In 2004, the film was re-released by Criterion with new features and extras including the video clip Samurai Dreams in all of its glory that was shown briefly in the film.

Videodrome is truly one of the strangest films ever made in the 1980s and it couldn't have come from a mind as stranger than David Cronenberg. Those new to the director will no doubt find this as a great place to start, even as his work is becoming more mainstream. Still, Videodrome has something to offer for fans of dark themes and shock while fans of actor James Woods will no doubt consider this one of his best films. In the end, Videodrome is a provocative yet eerie film from David Cronenberg.