Originally Written and Posted at Epinions.com on 9/23/07 w/ Additional Edits. 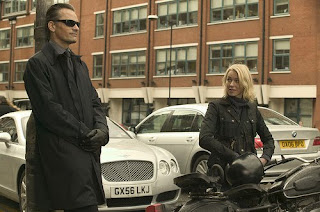 2005's A History of Violence proved to be a surprise hit with not just critics but also filmgoers. Even from a director like David Cronenberg who was known for his dark, extreme films like Videodrome, Dead Ringers, and Crash. Topping several critics polls including Oscar nominations for its adapted screenplay and a Best Supporting Acting nod to William Hurt. It seems that David Cronenberg has finally made it to the mainstream. In 2007, Cronenberg re-teams with his star from A History of Violence, Viggo Mortensen for another dark film involving the Russian mob and a midwife entitled Eastern Promises.

Directed by David Cronenberg and written by Steven Knight, Eastern Promises tells the story about a London midwife who investigates the death of a young pregnant teen in connection with the Russian mob and its driver. The investigation continues while the driver begins to question his loyalties as the family he works for starts to crumble over the death and investigation. Also starring Naomi Watts, Armin Mueller-Stahl, Vincent Cassel, Sinead Cusack, and Jerzy Skolimowski. Eastern Promises is a powerful yet eerie film from David Cronenberg.

When a young, pregnant 14-year old girl named Tatiana (Sarah-Jeanne Labrosse) is taken to a hospital, she gives birth to a baby girl. The midwife named Anna (Naomi Watts) finds a diary that belonged to Tatiana as its written in Russian. With her Russian uncle Stepan (Jerzy Skolimowski) having the knowledge to translate the diary, Anna isn't sure what to do as she turns to her uncle and mother Helen (Sinead Cusack). Anna finds a card in the diary that leads to a Trans-Siberian restaurant owned by a man named Semyon (Armin Mueller-Stahl). Semyon invites her to his restaurant as she asks him to translate the contents in the diary. While leaving, she runs into Semyon's son Kirill (Vincent Cassel) and his driver Nikolai (Viggo Mortensen).

Though Semyon's restaurant is a nice place for the Russian community in London, Semyon uses it as a disguise for his own mob family as trouble emerges involvinga Chechen family. When Kirill and Nikolai meet with Azmin (Mina E. Mina), they find the body of Soyka (Aleksander Mikic) that belonged to the other family. After disposing the body with help from Nikolai's professional work, the body is later found by a detective named Yuri (Donald Sumpter) with a message. Naming the baby Christine, Anna starts to get more information from Semyon about the contents of the diary while she starts to befriend Nikolai, who drops her off when her motorcycle falters. When Stepan reveals the contents of the diary, dark secrets involving Semyon and Kirill are unveiled as in an earlier meeting with Semyon, she is asked to return the diary.

When Nikolai is sent to pick up the diary, he warns Anna, Helen, and Stepan about what they're doing. With Semyon having problems with the volatile Kirill over the killing of Soyka, he turns to Nikolai for all the information and such. Nikolai decides to meet with Anna to return her fixed motorcycle and the address of Tatiana's parents. With Semyon realizing that Anna's uncle Stepan knows too much, he asks Nikolai to take care of the problem in order to become an official member of the mob. Even as the Chechen mob is wanting the head of Kirill for what happened to Soyka as things start to get worse. With Nikolai starting to rise up with Semyon favoring him over Kirill, secrets starts to unravel as Nikolai turns to Anna for some truth as she wants to know what is going to happen with Christine.

While the film is partially a crime drama, the genre is given a new perspective from screenwriter Steve Knight and director David Cronenberg. While the London underworld that involves different ethnic communities is nothing new for Knight whose screenplay for Stephen Frears' Dirty Pretty Things was a stark exploration of black markets. Knight's script for this film definitely goes inside the Russian mob which isn't like other mobs or mafia families. The operation is more low-key while their approach to violence is far more brutal. In reality, the film is about a midwife who enters into an underworld that she finds herself trapped only to find an unlikely ally in a sympathetic member of that mob.

Knight's intelligent script is wonderfully structured and filled with some humorous dialogue. Yet, it's all David Cronenberg in his eerie, observant, and stylized direction. While it doesn't have some of the strange, horror-like sense of humor of earlier films, Cronenberg's exploration of the mob and London shows the diverse community. For the story, Cronenberg doesn't go into full-on dramatic style that's expected in a lot of mainstream features. Instead, the performances are subtle from most characters to show the layers and complexity of their personalities. Even the use of narration from the perspective of Tatiana (voiced by Tatiana Maslany) works as a wonderful dramatic device to the plot. With the suspense, Cronenberg uses the momentum in underplaying what's going to happen and go for something that's unexpected.

One sequence that is shocking is a fight scene that is intense and brutal in a way that only Cronenberg can stage and capture perfectly. Cronenberg's take on violence is stylized yet confrontational since he doesn't underplay or exaggerate what happens. The violence is part of his niche as a director that fans of his earlier films will definitely appreciate. Yet, some audiences will definitely squirm at what he shows only because he wants to reveal the brutality and motivation of what is going on. Still, the film shows that Cronenberg remains on top of his game in being a storyteller.

Longtime cinematographer Peter Suschitzky creates a wonderful look to the film's lighting in both exterior nighttime sequences and the interiors in the Russian restaurant scenes that are very low-key, intimate, and with little color to emphasize the dark tone of the film. Longtime production designer Carol Spier with art directors Rebecca Holmes and Nick Palmer definitely bring life to the Russian restaurant with dark colors, exotic foods, and decorations that makes the film feel very different from the rest of the London locations. Costume designer Denise Cronenberg also plays to the Russian feel with the dresses of young girls, hooker's clothing, and the suit of Nikolai that is almost similar to the look Ed Harris had in Cronenberg’s previous film, A History of Violence.

Longtime editor Ronald Sanders brings some nice cutting to the film that includes that amazing fight sequence as it doesn't move too fast or too slow but works to emphasize its intensity. The pacing also works to create the suspense and tension of the drama to play its dark tone. Sound editor Michael O'Farrell and recordist Stuart Wilson do excellent work in playing to the film's violence and suspense to help bring terror to the audience. Longtime composer Howard Shore's hypnotic score is filled with wonderful arrangements including a Russian-style violin to play the drama in Tatiana's narration as it adds the sense loss to that character.

The casting is unique and memorable with characters and performance that stands out including Mina E. Mina as the barber Azim, Josef Atim as his mentally-challenged nephew Ekrem, Aleksander Mikic, Sarah-Jeanne Labrosse as Tatiana, Shannon-Fleur Roux as Kirill's daughter Maria, and Alice Henley as a hooker who is forced to take part in an initiation for Nikolai. Donald Sumpter has a memorable small role as a detective who hopes to take down Semyon while Sinead Cusack is great as Anna's cautious mother who believes Anna just went into a world that she shouldn't have stumbled to. Jerzy Skolimowski is great as Anna's uncle Stepan who makes some bad comments, always say some things that will antagonize anyone including Nikolai.

Vincent Cassel is great as the crazy, volatile Kirill who despite some of his antics and how he tries to push Nikolai. There's depth to Cassel's performance as a man who tries to win his father's love only to fall into his own failings while finding comfort in Nikolai. Armin Mueller-Stahl is great as the shady, charming Semyon who acts like a sweet, grandfather-like character but also has a violent, dark side when he confronts Kirill while his own actions just brings layers to Mueller-Stahl's performance.

Naomi Watts is amazing as Anna, a woman who tries to find truth into a young girl's relationship only realizing where’s she’s going. Watts brings a mix of subtlety and restraint to her performance that is very powerful as she drives the film’s plot and getting people to try and figure out what’s going on. It's an amazing performance from the actress who often gives a performance that is amazing to watch. Viggo Mortensen is truly the film's best performance as Nikolai. Sporting a Russian accent that works, Mortensen brings wit, charm, and a sinister quality that is complex in whether he's really bad or really good. The anti-hero approach of his character and performance is one that is both shocking and endearing as his scenes with Watts are masterfully acted while he does things like taking a cigarette out with his tongue or the fight scene has proved that he’s a powerhouse actor.

While not as powerful as A History of Violence or other films, Eastern Promises is still a wonderfully complex, explosive, and harrowing drama from David Cronenberg and company. Fans of the director will no doubt enjoy his take on crime drama as well as his brutal take on the violence. Fans of the crime genre will love to see the fresh take and eerie tone Cronenberg and screenwriter Steve Knight has given in its exploration of the London underworld. With top-notch performances from Viggo Mortensen, Naomi Watts, and Armin Mueller-Stahl, it's a film that will no doubt be given some recognition come Oscar time. In the end, for an intelligent film that's well-acted and masterfully directed, Eastern Promises by David Cronenberg is a film more than worth seeing.

I thought Eastern Promises was an excellent film. David Cronenberg seems to be getting better with age.

It's a film that has grown with me and I just put it into my best film of the 2000s decade list. He's gotten better and more confident. I think it's getting easier for him to make films now and I'm always looking forward to them.