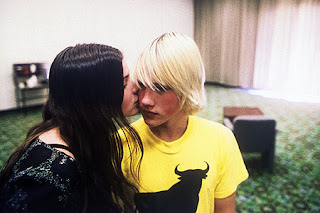 Written, edited, and directed by Gus Van Sant, Elephant is a film about an ordinary day in Portland, Oregon where kids in an otherwise, typical school day have their lives change when two fellow classmates come and terrorize the school. Inspired by the Columbine school shootings in 1999, the film is a fictional account about what might've happened as well as what motivated two kids into killing other people in school. With a cast of largely unknown young actors including a couple of veterans in Matt Malloy and Timothy Bottoms. Elephant is a harrowing, psychological drama from one of American cinema's most enduring storytellers.

A young student named John (John Robinson) is late for school as his father (Timothy Bottoms) tries to get him to school despite being intoxicated. After a lecture from the school's principal Mr. Luce (Matt Malloy), John hangs out with his friend Eli (Elias McConnell) who is doing a portfolio while a student named Michelle (Kristen Hicks) is going to the library to help out. When John steps outside of the school, two kids named Eric (Eric Duelen) and Alex (Alex Frost) appear carrying long bags and wearing black gear as they tell John to not re-enter the school. Earlier that day, Acadia (Alicia Miles) takes a class session about homosexuality while Nathan (Nathan Tyson) and Carrie (Carrie Finklea) are enjoying the day. While three girls in Jordan (Jordan Taylor), Nicole (Nicole George), and Brittany (Brittany Mountain) make comments about Carrie, their day of gossip would end.

For Eric and Alex, they would make plans of their own the day before the shootings as Eric plays Beethoven's Piano Sonata No. 14 in C Sharp Minor, No. 2 Moonlight-Adagio Sostenuto for recreation as they make plans. On the day of the shooting, they wreak havoc while a kid named Benny (Bennie Dixon) watches in horror as do many of the kids in school.

Now for a film that serves as a response to Columbine, the idea would've been to make a long film like the 2002 film Home Room with Erika Christensen, Busy Phillips, Victor Garber, and Agnes Bruckner about the aftermath of a school shooting. Gus Van Sant's approach in is response to Columbine leaves more for interpretation by not giving answers or any kind of explanation. In this minimalist approach, Van Sant prefers to let the audience get to know the characters instead of what is going to happen. In this short, 81-minute film, Van Sant profiles each character for a brief period of time while some things begin to happen all at the same time.

Like his previous effort Gerry, which had a largely improvised, minimalist script by himself, and the film's stars Casey Affleck, and Matt Damon. Elephant is also improvised but the script structure is non-linear in some areas since the film goes back and forth to let the audience know about the characters. The story takes its time to profile each person and their situations with the third act being the actual killings. In that third act, we get to see a moment that could've been heroic but Van Sant chooses to convey tragedy on top of tragedy. Plus, the characters in the film is set in a high school. Now a high school story would've been filled with many stereotypes and for a while, there are a few stereotypes like the characters of Jordan, Brittany, and Nicole who all act like the typical mean girls of high school. Then once we get to know them, the stereotype is thrown out of the window.

Van Sant's minimalist approach to writing is also shown on the directing by using a very small film crew with cinematographer Harris Savides as his main cameraman. Van Sant would film a scene a few times in different perspectives, and that is in the perspective of the characters in the film. For example, the scene where John is being photographed by Eli while Michelle passes by. There's three different versions of that entire scene in the film. Plus, being an improvisational director, Van Sant lets the kids be themselves for a bit giving them a chance to have their moment shine. Plus, the camera sequences would run in long takes where the camera follows whatever characters and the actors feel relaxed and confident enough to be improvisational or just play a character in the right way. This is an example of what real directing is.

If there's an idea of how Van Sant works, it's like this. He's a writer first and then, he direct. During post-production, he edits the film himself with very few assistants around him so he can have an idea on how he'll have a scene go and stop and how to move on the next. In its 81-minute time running, Van Sant brings a nice, engulfing editing style that isn't slow or isn't fast. It's nicely paced while its non-linear structure gives the film a nice rhythm that isn't hard to follow but gives the film a comfortable feeling.

Like his colorful work in Gerry, Harris Savides brings a natural, realism to the film in its color schemes with his camera while in many of the school's exterior scenes. He captures the blandness or ordinary look of its lights and look of the school. Even when using blue-green filters for the a few scenes at night in the home of Eric and a shot of the sky. The cinematography in the film is some of the most real and colorful camera work in the film and Van Sant has made a great decision in choosing Savides as his cinematographer. Art director Benjamin Hayden helps Savides in capturing the bland look of the school from its carpeting to walls and lunch room chairs that helps the look. In the sound department, Leslie Shatz and Felix Andrew do a great job in capturing the sound which sounds like real conversations of schools and the quietness of it.

Then there's the music of the film. Van Sant for years had been known for using pop music in all sorts of moments like previous efforts like My Own Private Idaho, To Die For, and Good Will Hunting. When he did Gerry, he chose the classical work of Avro Part, notably Spiegel Im Spiegel for the musical background. In this film, he uses the piano sonatas of Beethoven to convey the dooming melancholia that surrounds the mood and what is going to come.

Then there's the cast which could've been different if Van Sant used real, more seasoned professional actors. Instead, Van Sant goes for unknowns which helps with the exception of Matt Malloy as a stern but caring principal and Timothy Bottoms as John's drunken yet melancholic father. There's some fine performances from the female cast like Alicia Miles, Brittany Mountain, Nicole George, Jordan Taylor, and Carrie Finklea but it's Kristen Hicks who really stands out as the gawky, quiet Michelle. A character that could've been part of the trouble that's to come but she's the one that has morals and an understanding that makes her more human and it's the one many can relate to.

Bennie Dixon, Nathan Tyson, and Elias McConnell all bring in great performances but it's John Robinson who really stands out as the fresh-faced innocent performance as John. He's like every kid we know, smart, good, and knowing what to do while Robinson brings in a great performance when he knows danger is around. The performances of Alex Frost and Eric Deulen are also in their brooding stature as they try to convey the trouble side of themselves and showing their sick side during the killings.

The Region 1 DVD release that includes two cinematic specifications of the film whether in its original 4:3 full-screen format or the 16:9 widescreen presentation. Along with its 5.1 Dolby Digital and DTS sounds along with French and Spanish audio/subtitles. The DVD doesn't really include much except for the film's trailer and a promotional spot for HBO films. The only real feature that is shown is a 12-minute Behind the Scenes segment in which the films shows the actors playing around and talking about high school and their characters with Van Sant and his crew working on the film while he gives a glimpse of what he does in the editing room using an old editing machine as opposed to the computer that some use nowadays.

Elephant is Gus Van Sant's most fulfilling and captivating work since 1991's My Own Private Idaho. Of his films, this ranks as one of the best as well as creating a film that is more about what might've happened with Columbine rather than why did it happen. It is not an easy film to watch but certainly has a subject matter that cannot be ignored. In the end, Elephant is an entrancing yet hypnotic film from Gus Van Sant.

This is probably my favourite Gus Van Sant film. Not a huge fan of his work (that I have seen), but this really shook me!

Well, that is a great pick. For me, this would rank somewhere in the top 5 as I much prefer My Own Private Idaho, Last Days and To Die For over this film. Still, the work that Van Sant put with this film along with the rest of the Death Trilogy plus Paranoid Park and Milk were reason enough for me to consider Van Sant the best director of the 2000s.