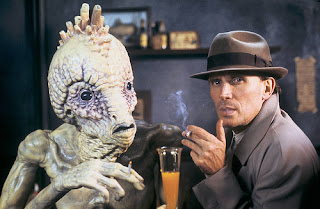 Based on the famed William S. Burroughs novel, Naked Lunch tells the story of an exterminator whose addiction to a mysterious substance has him becoming a spy at an Islamic port called Interzone. Written for the screen and directed by David Cronenberg, the film is more a mixture of Burroughs’ own novel and Cronenberg’s own ideas with surrealism. Starring Peter Weller, Judy Davis, Ian Holm, Julian Sands, and Roy Scheider. Naked Lunch is a stylish yet strange film from David Cronenberg.

It’s 1953 as William Lee (Peter Weller) is an exterminator whose job hasn’t been going well because his wife Joan (Judy Davis) has been stealing his insecticide for drug use. With Lee starting to hallucinate and see a big bug talking to him about an assignment, Lee starts to question his own drug use as well as his wife. When he turns to a specialist named Dr. Benway (Roy Scheider) for help, Benway gives him a special powder which only increases his hallucinations where something bad has happened. With help from his literary friend Martin (Michael Zelniker), Lee flees the U.S. and ends up at a strange Islamic port called Interzone.

Writing reports for the Interzone company, he would meet various characters including Hans (Robert A. Silverman), Kiki (Joseph Scoren), and a charming man named Yves Cloquet (Julian Sands). With his typewriter that is also the bug he confers to, Lee would create material through the use of powder where he would meet another important writer named Tom Frost whose wife looks like Joan. Lee is intrigued by Frost’s wife, who is also named Joan, as they later have an affair while Frost lends Lee his typewriter. Yet, Lee learns that from his typewriter bug about something where things go wrong after he meets a mysterious woman named Fadela (Monique Mercue). When Joan goes missing and Lee is in trouble with Frost, Martin and Hank (Nicholas Campbell) come to help out reading the material he has written.

With Kiki offering to help Lee by fixing Frost’s typewriter and use it as an exchange to get his own typewriter back. There, Lee learns something is up as well as what Interzone is trying to do as he hopes to save Joan from whoever is running Interzone and its intentions.

While there are elements of William S. Burroughs’ novel in the film as the character of William Lee is writing the titular book. It’s really a surreal yet fictional account about a man in the 1950s trying to write this revered book through strange hallucinations as he deals with his own addictions in a world where it’s about the power of writing. What David Cronenberg does is deconstruct Burrough’s novel by infusing a lot of his own ideas by creating a noir-style film where Lee is Burroughs set into this very dark yet surreal world filled with talking bugs serving as typewriters.

Cronenberg also creates a world that has noir-like feel in the character of Lee who is pretty laid back and always trying to keep himself in check despite his addictions. The Joan characters are essentially a characterization of Burrough’s own wife where Cronenberg brings some of Burrough’s own real-life stories into the film. The complexity of the story that is a mix of noir, drama, surreal comedy, and Cronenberg’s own provocative take on technology is one that isn’t easy to tell. It does start off slowly as audiences who are familiar with the book would realize that this is not going to be a conventional adaptation.

Cronenberg’s direction is truly hypnotic for the way he creates the world of 1950s America as well as the world of Interzone which is really a take on Tangiers. There is a very rich quality to the way Cronenberg made the film which is miles away from his early yet grittier films of the 1970s and early 1980s. The compositions are more striking as the way he allows the surrealistic elements to be more lively and humorous. At the same time, Cronenberg is a filmmaker who is never afraid to get his hands dirty and play with expectations. One key scene is a conversation between Lee and Frost where Frost reveals dialogue that isn’t spoken is that he is saying something while his mouth aren’t saying something much different.

It’s Cronenberg being a trickster in order to play off the ideas of conventional cinema since he is not telling a conventional film. Some of the effects scene such as the typewriters as well as the bugs and such do create something is very creepy. It’s also disturbing but in a fun way because he’s not trying to be absolutely scary but rather make it OK for the audience to laugh at these creatures. Overall, Cronenberg creates a film that isn’t just eerie but also entertaining as it’s a great take on Burroughs’ novel.

Cinematographer Peter Suschitzky does an amazing job with the film‘s stylish cinematography from the more gritty yet dark look of the scenes in the U.S. in both its exterior and interiors to the lush yet vibrant look of the Interzone port scene with its bright, yellow colors for the daytime exterior settings. Editor Ronald Sanders does a great job with the editing as he adds some wonderful, rhythmic cuts for some of the suspenseful moments of the film while keeping it straightforward for a large portion of the film.

Production designer Carol Spier, along with set decorator Elinor Rose Galbraith and art director James McAteer, does a brilliant job with the look of the apartment Lee lives in along with the lavish world that the people at Interzone live in along with the eerie factory towards the end of the film. Costume designer Denise Cronenberg does an excellent job with the costumes to play up the 1950s film noir style with the suits the men wear to the different array of clothing that the two Joans wear. Sound mixer Bryan Day does a fantastic job with the sound work to capture the chaos of the Interzone port as well as the small, cluttering noises of the typewriter bugs.

The music by Howard Shore is phenomenal with its array of eerie orchestral score to play up the film‘s dark mood and suspense. With additional contributions from Ornette Coleman, Shore is able to use Coleman’s music to help play up the feel of the 1950s literary world that is booming at the time. The overall score is among one of the film’s highlights.

The casting by Deirdre Bowen is terrific as the cast includes some notable appearances from Sean McCann as a detective, Robert A. Silverman as the sly Hans, Joseph Scoren as the sensitive Kiki, Michael Zelniker as the bookish Martin, Nicholas Campbell as the fun-going Hank, and Peter Boretski as the voices of the creatures. Other memorable performances include Monique Mercure as the creepy Fadela, Julian Sands as the charming but dangerous Yves Cloquet, and Roy Scheider in a wonderful cameo as Dr. Benway. Ian Holm is great as Tom Frost, a version of novelist Paul Bowles as Holm brings a calm intensity to a dark character who is obsessed about great, foreign typewriters.

Judy Davis is wonderfully captivating in the dual performance as the two Joans. In the role of Lee’s wife Joan, Davis brings a troubling yet stupor physicality to a woman heavily-addicted to insecticide powder. For the role of Frost’s wife, there is a woman who is far more stranger as Davis brings something more entrancing and seductive to a woman who falls for Lee. Finally, there’s Peter Weller in a mesmerizing performance as William Lee. Playing a version of William S. Burroughs, Weller brings a very understated yet chilling performance as an exterminator who is haunted by his own hallucinations. There is a calmness to Weller’s performance in the way he reacts to the situations he’s in while he manages to create a character that is very intriguing over the things that is happening to him.

Naked Lunch is a disturbing yet hypnotic film from David Cronenberg that is led by a exhilarating performance from Peter Weller. Fans of Cronenberg will no doubt see this as one of his finest films for the way he deconstructs William S. Burroughs’ famed novel. Anyone seeking a straight adaptation of that famous novel will be disappointed though could be intrigued by how Cronenberg takes that story into a stylish noir film. Naked Lunch is truly a film that is one-of-a-kind as it could only be made from some as unique and as daring as David Cronenberg.

Wonderful review, I can't wait to see this one. I love Judy Davis and I'm glad Shore also score this one - I love the work he did in ExistenZ

It's a film that needs to be seen more and it's a great deconstruction in the art of adaptation.

eXistenZ is now becoming one of my favorites because of how original and ahead of its time it was. It needs to be seen more by viewers.