Originally an Alternate Review Written and Posted at Epinions.com on 10/13/03 w/ Extensive Revisions. 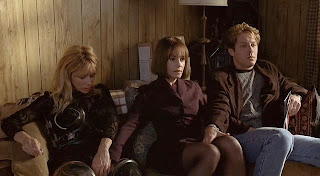 Based on the J.G. Ballard novel, Crash is a film where a married couple seeks out new sexual thrills by watching and participating in car crashes. Written for the screen and directed by David Cronenberg, Crash is a film that pushes sex to new levels as its premise is to shock and provoke. Dealing with elements of destruction, sadomasochism, homosexuality, infidelity, and all sorts of stuff, Cronenberg takes everything to the extreme for this intense film. Starring James Spader, Holly Hunter, Deborah Kara Unger, Elias Koteas, and Rosanna Arquette. Crash is a mesmerizing yet confrontational film from David Cronenberg.

Film producer James Ballard (James Spader) and his wife Catherine (Deborah Kara Unger) are seeking some new thrills in their sex life as they even try to have sex with other people. During a ride into increasing traffic on a highway, James get himself in a car accident where he sees another injured driver who exposes her breast and masturbates following the intense crash. Suffering multiple injuries, James sees the woman named Dr. Helen Remington (Holly Hunter) who is at the same hospital where she is accompanied by man named Vaughn (Elias Koteas). Vaughn checks into James's injured leg as he's intrigued as James returns home to find his damaged car. Meeting up with Helen, the two begin an affair based on their love for traffic accidents.

When Helen takes James to a performance art show hosted by Vaughn, James watches Vaughn and a stuntman named Colin (Peter MacNeill) recreate James Dean's infamous car crash for their show as they both survived. Meeting up with a friend of Vaughn in Gabrielle (Rosanna Arquette) who is surrounded by leg and back braces, James takes part in Vaughn's cult as he brings Catherine along who finds thrills as she becomes interested in Vaughn who believes that car crashes and its destructive aftermath is a work of art. With Catherine becoming more attracted to Vaughn with James becoming uneasy, another horrific incident leaves James worried as he later has an affair with Gabrielle.

With Vaughn set to create his next big presentation with claims that it will be his masterpiece. James wonders if he and Catherine are going too far in their fetish for the chaos of car accidents.

What makes Crash intriguing is the way Cronenberg pushes things on sex and pain. With fast-paced camera work on the driving scenes by Peter Suschitzky, Cronenberg gives a look of everything that seems off and something might tick. The film as it goes by keeps on getting shocking and shocking by each scene with the ending being the icing on the cake. The real flaw of the film is in its extremities whether it’s the nature of violence or the graphic sex scenes, which features a lot of female genitalia from Unger, Arquette, and Holly as well as scenes involving Spader and Koteas with other women including themselves in a scene. Cronenberg makes sure, nothing gets off easy as he creates something that is truly confrontational and thrilling.

On the performance front, all the five main players in the film standout on their own or with the other actors where everyone seems to have some kind of chemistry whether its brilliant or discomforting. Holly Hunter brings a dark, masterful performance as Helen Remington where she proves she can be sexy and powerful as a broken soul trying to plan the next crash. Rosanna Arquette, who is always underrated, brings in a chilling, fragile performance as Gabrielle as she keeps walking on a cane and wanting more and more pain. Deborah Kara Unger is the film’s sexiest performance as she starts out as this bored woman who becomes more aroused into her own, dangerous personality. Elias Koteas is brilliant as the manipulative, psychotic Vaughn who is played with great indulgence that makes Koteas the most interesting actor in the film. James Spader is the film’s more moralistic character as he is trying to figure out if everything he’s doing is wrong while this film, would slow his career down a bit.

Crash is a chilling yet harrowing film from David Cronenberg that features a superb cast and a phenomenal premise. While it may not live up to earlier great films like Dead Ringers and Videodrome, it is a very interesting yet chaotic film that only Cronenberg can pull off. While it's definitely not a film for everyone, particularly those with extremely-conservative films. It's a film that works because it challenges the idea of what is normal as Crash is a powerful from David Cronenberg.

Super crazy film--Cronenberg is such a bad ass!

You goddamn right it is. A real turn-on.