Originally Written and Posted at Epinions.com on 9/13/07 w/ Extensive Revisions. 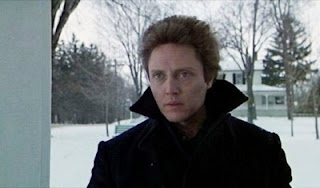 Known for his novels that helped transcend the genre of horror, Stephen King remains one of the most beloved writers in literature as his own work would often turn into films. In 1983, one of his famed novels entitled The Dead Zone was made into a feature film by Canadian film auteur David Cronenberg. Known for his unique, dark take on sex and violence, Cronenberg proved to be the right man to handle a material as dramatic and horrifying as it would eventually become a cult hit in its own right.

Directed by David Cronenberg with adaptation by Jeffrey Boam, The Dead Zone tells the story of Maine schoolteacher who survives a car accident after being in a coma for 5 years. During his recovery, the man begins to have visions of the future and past relating to someone he touches. After using his new powers to help prevent tragedies, he is then linked to a presidential hopeful who he believes will bring a horrible future. Starring Christopher Walken, Brooke Adams, Tom Skerritt, Colleen Dewhurst, Herbert Lom, and Martin Sheen. The Dead Zone is a fascinating, chilling suspense-drama from David Cronenberg.

The life of Maine schoolteacher Johnny Smith (Christopher Walken) is going great as he has a steady girlfriend named Sarah (Brooke Adams) and a great career. After a date at an amusement park where Johnny receives a headache, he is suddenly in a car accident during a rain-soaked night where he would be comatose for five years. After waking up and under the car of Dr. Sam Weizak, Johnny learns from his parents (Sean Sullivan and Jackie Burroughs) that he lost five years of his life as Sarah is now married with boy named Denny. During a checkup, Johnny grabs the arm of a nurse (Chapelle Jaffe) where he sees a strange vision about her daughter Amy (Julie-Ann Heathwood) is trapped at burning house. When Sam learns what Johnny did as Sam realizes some stuff about himself, it is clear that Johnny has gotten a strange gift that Sam feels shouldn't be exploited.

Returning home to his parents, a sheriff named Bannerman (Tom Skerritt) asks Johnny to help him investigate a series of murders that's been going on for three-and-a-half years. Johnny politely declines as he later receives a visit from Sarah which only drives him to despair. Finally helping Bannerman and his partner Frank Dodd (Nicholas Campbell), Johnny realizes who the killer is as he asks the man's mother (Colleen Dewhurst). Deciding to move to a new town in Maine as a private tutor, Johnny becomes a recluse refusing to use his powers. When a businessman named Roger Stuart (Anthony Zerbe) asks Johnny to tutor his shy son Chris (Simon Craig), Johnny agrees as they become friends. During a session, Johnny learns that a politician named Greg Stillson (Martin Sheen) is running for the Senate with Stuart providing the funds.

With his focus on tutoring Chris, Sarah re-appears again as campaign volunteer with her husband Walt (Barry Flatman) which only furthered Johnny's despair until he sees a vision involving Chris. Realizing he can see the future in which Stuart realizes what happened, Johnny also comes across Stillson where he sees something much darker. With advice from Sam, Johnny realizes what he must do to save the world from what Stillson would do.

Given the knowledge and description of Stephen King's world of horror and suspense, it's very clear if there was going to be a director that was to be faithful to his vision, it's David Cronenberg. While like most adaptations, there's a few stories, details, and such that are cut. The concept that Cronenberg and screenwriter Jeffrey Boam has made is very true to King's vision of psychic powers and man's struggle with that power. The plot and concept is told very wisely in a film that builds up its momentum while studying a character who is likeable yet flawed.

Credit goes to Cronenberg for using King's idyllic, small town atmosphere as a setting point. While the film is shot in Cronenberg's native Ontario, the small-town feel is there as well as the comfort zone that is a small town rather than something larger. When it comes to suspense, Cronenberg doesn't make the audience aware of when it's going to happen. Instead, he goes for something quick and unexpected while building up momentum the outcome of what Johnny sees. Cronenberg's strength in his directing isn't how he plays up to the genres of horror and suspense but what he gives his actors into their performances. Instead of having them be one-dimensional and such, there's more personalities to them as well as complexities and flaws that makes them more human. Overall, the film shows why Cronenberg remains one of cinema's most enduring visionaries.

Cinematographer Mark Irwin creates a wonderful look with white snow for some of the film's wonderful, daytime exterior sequences to set the mood of the film. When it's night and dark, the film emphasizes its suspense and tone as well as the troubled state of mind of Johnny Smith. Production designer Carol Spier and art director Barbara Dunphy help create the film's small town look with intimate sets and decoration to give the idea of a working-class small town that is idyllic. Costume designer Olga Dimitrov helps with that look for the clothing with more posh business suits for the characters of Stillson and Stuart that includes contribution from Cronenberg's sister Denise.

Editor Ronald Sanders brings a nice approach to the film's pacing that plays to its suspense and horror while not making it too slow or stylistically in the time when fast-cut edits were becoming trendy. Sound editor David Lewis Yewdall helps with the film's sound to convey the suspense in the small town environment that works in presenting the horror. Composer Michael Kamen, who was chosen over Cronenberg regular Howard Shore, brings a unique score that is both dramatic and suspenseful with his heavy, orchestral arrangements. It is a great score though it doesn't have some of the intensity that Shore brings to Cronenberg's films.

The film's cast is wonderfully assembled with memorable performances from Sean Sullivan and Jackie Burroughs as Johnny's loving parents, Nicholas Campbell as the shady Frank Dodd, Barry Flatman as Sarah's husband Walt, Roberta Weiss as one of the Castle Rock victims Johnny sees, Chapelle Jaffe as a nurse, Julie-Ann Heathwood as the nurse's daughter, Geza Kovacs as Stillson's bodyguard Sonny, Martin Sheen's real-life son Ramon Estevez as a photographer in the film's ending, and in the roles of the baby Denny, Raffi Tchalikian and Seirge LeBlanc. Colleen Dewhurst gives a small yet memorable performance as the Castle Rock killer's mother who sees Johnny as the devil in the flesh. Tom Skerritt is excellent as Sheriff Bannerman who asks Johnny for help while being sympathetic to his own reluctance.

Simon Craig gives a memorable performance as Chris Stuart, a shy kid who finds a friend in Johnny while proving to see through some of his own father’s faults. Anthony Zerbe is great as Roger Stuart, a businessman who tries to help his son while trying to deal with Stillson whom he confesses to Johnny that would lead to a huge plot point. Herbert Lom gives the film's best supporting performance as Johnny's sympathetic, protective doctor Sam Weizak who also becomes the one true friend to Johnny. Lom's performance is also great in one scene concerning the future that also shows a bit of humor.

Brooke Adams is excellent as Sam's ex-girlfriend who loves the man but is also dealing with the life she has now since his coma as she brings more depth than the typical girlfriend role. Martin Sheen is brilliant as this brash, corruptive politician who has a lot of charm and wit to shadow his own desire for power.

Christopher Walken gives a phenomenal performance as Johnny Smith with a restraint, subtlety, and creepiness that is pure Walken. Walken's ability to play it straight and normal in the film's early scenes only to show the depth and despair of his character as he deals with his new changes. While Walken shows some of the creepiness and shouts that fans come to know and love. Walken is proof that he's a real actor in this role as the complexity in how he deals with newfound powers and how they're used shows emphasizes that he can do a lot. In the end, it's one of the greatest film roles he's ever played.

When it was released in 1983, the film proved to be a hit with critics and filmgoers, especially fans of Stephen Kings' novels. The film helped Cronenberg get mainstream attention despite his desire to work on his own projects. The film, like many of King and Cronenberg's work, would attract attention through pop culture and a cult following. Most notably, Christopher Walken's portrayal of the character would be spoofed by the actor himself in his many appearances on Saturday Night Live. In 2002, the film turned into a hit TV show starring Anthony Michael Hall as Johnny Smith that's continuing to do well.

The film version of The Dead Zone might not live up what King purists might want in comparison to the novel. David Cronenberg's adaptation of Stephen King's novel is still one of the best King film adaptations ever made. New to Cronenberg will no doubt enjoy this as it's among one of his finest films. With a great cast led by THE GREAT CHRISTOPHER WALKEN, it's a film that has something both fans of horror and suspense will enjoy. In the end, The Dead Zone is a fascinating feature from both Stephen King and David Cronenberg.

"The ice is going to break" is the line I always remember from this film. It has been a while since I last saw The Dead Zone. I really need to watch it again. I forgot how good Walken was in this film.

It's easy to forget that Walken can do more than be the crazy guy. He does add a lot of depth to a character that is essentially fragile after being in a coma for five years and having this gift that he doesn't want to use.

It is still an amazing film and definitely one of my favorite Cronenberg films despite the fact that it's often parodied by Walken on SNL.