Originally Written and Posted at Epinions.com on 11/12/05 w/ Extensive Revisions. 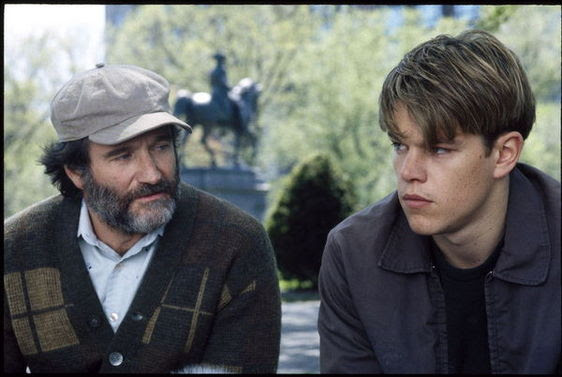 Directed by Gus Van Sant and written by Matt Damon and Ben Affleck, Good Will Hunting is the story about a young janitor named Will Hunting who has a profound intelligence while churning out answers for math theorems at M.I.T. Despite his knowledge, Will is a troublemaker who is on the verge of going to jail until a mathematician wants to work with him as well as get some therapy. Bringing in an old colleague, the therapist explores Will and his life while Will contends with a new girlfriend and his working-class buddies. Starring Matt Damon in the title role along with Ben Affleck, Casey Affleck, Cole Hauser, Stellan Skarsgard, Minnie Driver, and Robin Williams. Good Will Hunting is a majestic, profound character study from Damon/Affleck and Gus Van Sant.

Will Hunting is a 20-year old laborer as he works as a janitor at the prestigious M.I.T. college near Boston while hanging out with his buddies Chuck (Ben Affleck), Morgan (Casey Affleck), and Bill (Cole Hauser) at night. At the school, the revered mathematician professor Gerald Lambeau (Stellan Skarsgard) creates a math theorem for his students to answer correctly. Instead, none of them make the answer except for Will who gets it right as Gerald wonders who answered it. After getting in trouble over assaulting an officer during a fight with an old school bully, Will is set to go to jail following a trial. Yet, Lambeau bails him out by asking him to assist in solving math problems while taking therapy sessions twice a week.

Will takes the offer as he falls for a British student named Skylar (Minnie Driver) whom he met at a bar near Harvard after outwitting a Harvard classmate. With the therapy not working including a session with the renowned George Plimpton, Lambeau calls his former roommate Sean McGuire (Robin Williams) for help. McGuire reluctantly takes the job as a favor for Lambeau as the community college teacher takes Will as his patient realizing that he's up for a challenge. The sessions don't go well at first until the two find common ground where Will opens up a bit with each session. With Will working with Chuck in construction, his relationship with Skylar starts to blossom as she is amazed by his intelligence while Chuck and the gang like having her around.

When Lambeau talks about getting Will a job for financial corporations, Will isn't sure as Chuck fills in for him during another interview while Will goes on a date with Skylar. When Skylar tells him that she's going to California to finish her medical studies, Will starts to feel lost as he reveals that he isn't honest about his family life and is afraid to tell her the truth. After a falling out with Lambeau, Will turns to McGuire for help who learns more about Will's troubled background prompting McGuire to confront Lambeau. With Will uncertain about what to do, Chuck helps Will out to go for whatever he's offered as McGuire also helps Will with his own troubled past.

In a story like this, there could've been so many ways it would’ve been approached though Damon and Affleck do bring out some conventional storylines to the film. In Van Sant's approach, it's really about a young man who is trying to figure out what to do with his intelligence without giving in to conformity or a situation that will hurt him. Van Sant's direction is very spot-on in bringing out real characters and situations while being very observant in his direction.

The heart of the film is in the script by Damon and Affleck that balances both a bit of comedy in many of the film's Boston sequences while the dramatic moments involve Will's therapy, his math sessions, and his relationship with Skylar. It's a film that acts more as a character study that allows Will and various characters to develop in the course of the film. While the film does follow a formula that is traditional with most dramatic narratives, the script Damon and Affleck create do add more than what the story offers as does Van Sant's engaging direction into what is truly a heartwarming film.

Helping Van Sant in his visual style is cinematographer Jean-Yves Escoffier who brings a colorful look to many of the film's exterior sequences while using lots of orange lights for many of in the intimate interior scenes, including a few of the bar scenes. Production designer Melissa Stewart also does a great job in getting the feel of the bars, rooms, and surroundings in the Harvard, Cambridge areas as well as the South Boston area where everything is gritty or broken-down where the use of the locations gives the film some credibility. Even the costume design from Van Sant regular Beatrix Aruna Pasztor brings realism to the film's look of colleges and street. Editor Pietro Scalia does a wonderful job in the editing, especially in some of the kaleidoscopic sequences of the movie while on a whole, moves very steadily.

With a wonderful plaintive and atmospheric score from Danny Elfman. The film has a wonderful soundtrack of music featuring cuts by the Dandy Warhols, Gerry Rafferty, Supergrass, Del Shannon, Luscious Jackson, Starland Vocal Band, Al Green, and the Waterboys. Aside from classical pieces and Elfman's score, most of the original music comes from the late Elliot Smith. With his wonderful, singer-songwriter style of music fused with melancholic lyrics including the Oscar-nominated Miss Misery, Smith is the real star of the film's music since it's the driving force behind the shadow that Will Hunting hides.

Then there's the cast that includes cameo appearances from Harmony Korine, George Plimpton, and To Die For star Allison Folland while Scott William Winters makes a memorable appearance as a target for Will's intelligence in a battle of who would win Skylar's phone number. Also making small, memorable appearances are Cole Hauser as the quiet yet street-wise Billy and Casey Affleck as the more abrasive, immature Morgan. Stellan Skarsgard is brilliant as the intelligent but selfish Gerald Lambeau who believes he has a chance to help Will's future only to be reminded that before he was great, he was just a regular guy. Ben Affleck gives a wonderful performance as Chuck, the true friend and supporter that Will has who knows what's he's going through and tells him of his opportunity. Affleck brings a lot of humor and heart as a guy who is content in his destiny while he hopes for the best in his best friend.

Minnie Driver is amazing in the role of Skylar, a British student who has a lot of charm and dirty humor while trying to understand Will's background and Driver really brings a lot of drama and goodness to Will, even when he's trying to push her away. Robin Williams is the film's best supporting performance and definitely worthy of the Oscar he won as the sympathetic, tough therapist Sean McGuire. Williams brings a lot of humor and dramatic restraint to his performance while being a wonderful guide and unlikely father figure that Will needed and sought for all of his life. It's truly a majestic performance from the always talented comedian-actor.

Matt Damon is also brilliant in his role as the troubled Will Hunting by not making him into a genetic kind of caricature but a real person. Damon uses his grit, street-wise wit, and winning smile into a performance that everyone can cheer for while proving that he is more complex as a character who is dealing with abandonment issues and what to do with the gift that he has. It's truly a wonderful performance from Matt Damon whose often overlooked as an actor since people focus on his good looks.

While Good Will Hunting isn't a perfect film, it's still a wonderful, majestic gem from director Gus Van Sant with the wonderful writing talents of Matt Damon and Ben Affleck along with a great cast led by Damon, Robin Williams, and Minnie Driver. While many of the people involved in the film went on to bigger and better things, except for Ben Affleck, it's this film that created new stars out of Affleck and Matt Damon while opening some artistic doors for Robin Williams and Van Sant who retreated from mainstream fare for European art film styles in recent years. Still for a character study film that's got a lot of heart, great characters, the late Elliot Smith's music, and a wonderful story, Good Will Hunting is the film to see.

Though it had its moments of just people doing dramatic, non-realistic montages, there still is so much here to enjoy especially the scenes with Williams and Damon. Great first-time script job from Affleck and Damon as well. Good Review my man!

It has a few flaws but there's times when you don't care for the flaws. It's a film that still holds up and it's one of Van Sant's best films. I divulge more into it with my Auteurs essay on him that is coming in September.