Originally Written and Posted at Epinions.com on 6/27/07 w/ Extensive Revisions. 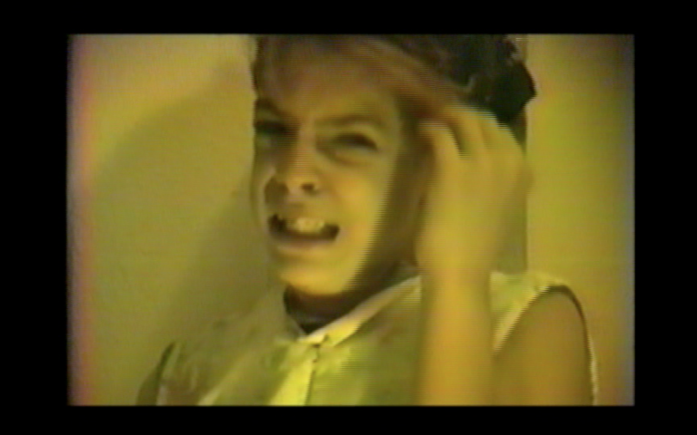 When actor-writer-director John Cameron Mitchell of Hedwig & the Angry Inch fame was set to work on his next project that would be 2006's Shortbus. The actor held auditions for thousands of unknowns all over the U.S. During a final round of auditions in New York City in 2003, several people who auditioned and Mitchell discovered one tape that proved to be haunting. It came from a man named Jonathan Caouette whose footage of a young man dealing with his mother's mental illness struck a chord. Though Caouette would eventually get a cameo in Mitchell's film, Mitchell and fellow iconic gay director Gus Van Sant served as executive producers for Caouette's haunting documentary. A documentary he made with a home-editing system and hours of footage from the cameras he owned with a very small budget of $218 that was entitled Tarnation.
Directed, written, shot, and edited by Jonathan Caouette, Tarnation tells the story of Caouette's life through 20 years worth of films from Super 8 cameras and VHS video. The film's main exploration is how Caouette lived with his mother's mental illness and living with his grandparents in Houston during this time of discovery. The film then progresses through the years as Caouette comes out at the age of 25, moves to New York City, and try to find the father who had abandoned him at a young age.

It's March 2002 as Jonathan Caouette receives a call about his mother Renne LeBlanc about an overdose on lithium.  Jonathan returns to his home in Houston, Texas as he tells the story of his life beginning with his grandparents' marriage in the early 1950s.  After the birth of their daughter Renee, Adolph and Rosemary would have Renee be a child model in the regional circuit until at 12 twelve when she fell off a roof and was nearly paralyzed for six months.  In 1972, she meets Steve Caouette as they briefly married only to call it quits before the birth of Jonathan.  Jonathan's early childhood with his mother and grandparents were troubling due to his mother's mental illness where a move to Chicago went bad where they returned to Texas.  With Renee's illness happening, Jonathan's life was filled with turmoil as he sent to foster homes until 1979 when he went to live with his grandparents for good.
Though he would barely see his mother while dealing with the realization that he was gay at age 11, Jonathan's life was troubled until the mid-1980s when he discovered the world of underground gay clubs, punk rock, and underground films. Through these films, he would crate his own films about his life as he would deal with his own issues as he became hospitalized eight different times from 1987 to 1993.  During that period, he would have a boyfriend named Michael to cope with his dysfunctional family as life was messy.  With the death of his grandmother in 1995, Jonathan eventually left Texas for New York City in 1997 as he would gain another boyfriend in David Sanin Paz.  Jonathan even brought his mother to NYC in 2000 where things went well at first until Jonathan's own questions about his father bothered her.
In 2002, Jonathan finally meets his father Steven Caouette whom he liked though the attempt to reunite his parents proved troubling.  Finally returning to Texas to see the damage of his mother's lithium intake, he realizes what's been going on as he wonders about his own mental stability.
Viewing one's life, especially from dysfunctional circumstances, are definitely uneasy to watch. Watching Jonathan Caouette reveal all of these things, especially his eccentric grandparents and his dysfunctional mother are very troubling. Yet, Caouette doesn't exploit them but rather show audiences that despite these flaws. They are actually nice, interesting people who are quirky. Him even playing a rape victim at age 11 is strange yet unique. In fact, there's never a dull moment in his documentary nor is there something that people will be offended by. While Adolph and Rosemary Davis' intentions on trying to help their daughter and the outcome is sad. Yet, they can't be blamed for what they tried to do. Nor should Renee for her attempts to be with her son.
There's no one to blame in this film yet some of the scenes that are shown, particularly the aftermath of Renee's lithium overdose is extremely hard to watch. What is more startling about his film is how Jonathan Caouette came out of this and how he's manage to survive all of these things. Through his unique direction as well as the film's editing with help from Brian A. Kates. The film's editing is wonderfully stylish and emotional into how much footage was used for a 100-minute film. Even the music performed by Max Lichtenstein is excellent as its soundtrack featuring cuts by Dolly Parton, the Magnetic Fields, Lisa Germano, the Cocteau Twins, Low, Glen Campbell, and many more. The music used in the film is done with some kind of emotional resonance to see where the story is going.
While it's not an easy film to watch, Tarnation is still one of the best documentaries and films of the decade. Fans of gay & lesbian cinema will no doubt be shocked by what Jonathan Caouette shows. Yet, the real amazement is his survival and how he's continued to forge ahead with his life.  In the end, Tarnation is a raw, harrowing, yet amazing film from Jonathan Caouette.
(C) thevoid99 2011
Posted by thevoid99 at 1:24 PM