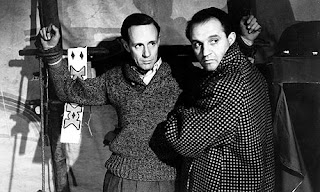 After sinking a boat nearby the Hudson Bay in Canada, a German U-boat commander (Richard George) asks Lieutenant Hirth (Eric Portman) and Lieutenant Kuhnecke (Raymond Lovell) along with four crew members to go to a nearby camp to get food and fuel. During the journey, Hirth, Kuhnecke, and their men see their submarine attacked by the Canadian air force as they realize they have to escape Canada. Arriving into the camp, they take shelter into the home of a French-Canadian hunter (Laurence Olivier) and the camp leader (Finlay Currie) only to take over and deal Eskimo tribes and later steal a plane.

Arriving nearby a Hutterite community close to Winnipeg, the remaining gang led by Hirth seek shelter by the community as its leader Peter (Anton Walbrook) take them in. When one of the U-boat sailors in Vogel (Niall MacGinnis) finds comfort in the community, Hirth believes that the community could be of help when he gives a stirring speech about Nazism. Yet, Peter finds Hirth and his men trouble though he does accept Vogel who explains about his old life prior to Nazism. Hirth and his remaining men leave the camp as they continue to trek into Canada in hopes to reach Vancouver as there’s a bounty on them. During the journey, the men would encounter eccentric figures such as a novelist (Leslie Howard) and a deserting Canadian soldier (Raymond Massey) leaving them to wonder if they would ever escape.

While the film was made during the early years of 1941 as a propaganda piece of sorts for the then-neutral U.S. at the time. It is a film about survival but from the perspective of the Nazis as they trek through Canada in hopes to make it to the U.S. and return safely to Germany. During the journey which starts off with six men in the beginning, the team would eventually become smaller as the journey to the unarmed U.S.-Canada border near Vancouver. Yet, they would encounter places and people during this journey as one of their superiors want them to enjoy the splendor of Nazism in his belief that Germany will win the war. Unfortunately, a Hutterite leader disagrees while one of the sailors in that group regains his love for baking and comforts a young Hutterite girl (Glyins Johns) who lost her family because of the Nazis.

Emeric Pressburger, with help from Rodney Ackland on the scenario, creates a script that allows these men who are supposed to be the villains become more real during the journey. Particularly Vogel and Hirth where they would have some development during their journey while Hirth maintains his belief in the greater good that Adolf Hitler will bring with Nazism. What makes the journey more interesting are the people they meet such as a French-Canadian hunter who has been away from the world for some time along with the Hutterites and various people throughout Canada. In the end, the stakes of being caught or killed by 11 million Canadians is something Hirth and his men can’t endure while they hope to return to Germany as heroes.

Michael Powell’s direction is truly engaging in the way he captures the Canadian landscape as he got the chance to shoot the film on location in Canada. Yet, he also makes the country a character of its own from its gorgeous forest, vast mountains, and large wheat fields. It’s a place that is very different from Germany where Powell keeps the camera in tact of everything that is going on. From some great wide shots to close-ups, Powell makes sure the camera is always making sure something is happening. Yet, he allows characters such as Hirth and Peter to have their moments about the idea of the world as Hirth is the one character struggling to maintain his beliefs. While the film does have a few flaws as a propaganda piece, notably the way the film ends on a humorous note. It is a film that is a great piece of survival largely due to the writing of Emeric Pressburger and Powell’s compelling direction making it one of their finer collaborations.

Cinematographer Freddie Young does excellent work with the film‘s black-and-white photography to bring a wonderful bright yet broad look to the Canadian mountains and forests along with some great nighttime shots for the cities and places the character live in. The editing by future acclaimed filmmaker David Lean is very good for maintaining a leisured pace while keeping the film straightforward with some transitional dissolves and fade-outs to keep the film moving along throughout the film.

Art director David Rawnsley does some nice work with the look of the cabin the Nazis embark on along with the Hutterite homes and teepees they would seek shelter in. Sound supervisor A.W. Watkins does fantastic work with the sound from the way bombs fall to gun shots and the crowd interacting in the cities and town meetings. The film’s music by Ralph Vaughn Williams is superb for its intense yet serene score for many of the film’s tense moments along with some lighthearted pieces for some of the low-key and relaxing moments of the film.

The cast is definitely a highlight in the film as it includes some notable small performances from Ley On as an Eskimo in cabin scenes, Charles Victor and Frederick Piper as a couple of Hutterites, and Theodore Salt as a U.S. Customs officer. In other small roles, there’s some fantastic work from Glynis Johns as Anna, Raymond Massey as an AWOL Canadian soldier, and Finlay Currie as the Eskimo camp leader. For the roles of the Nazi sailors, there’s Basil Appleby, John Chandos, and Peter Moore as the three men who help along with Richard George as the U-boat commander. Raymond Lovell is very good as Lieutenant Kuhnecke, an officer who tries to get everyone to calm down as he tries to save everyone by flying the plane they stole. Niall MacGinnis is excellent as Vogel, a sailor who finds peace at the Hutterite home as he deals with Hirth’s brutal leadership and how much Nazism has changed his life for the worst.

Leslie Howard is superb as Phillip Armstrong Scott, a novelist Hirth and his men meet where Howard brings a great sense of charm to a man that is an outsider only to be aware of who he is facing. Anton Walbrook is phenomenal as Peter, a Hutterite community leader who takes the Nazis in only to be alienated by Hirth’s speech as he counters it with a wonderful monologue about the Hutterite life. Laurence Olivier is great in a very funny role as a French-Canadian hunter who learns about what’s going on in World War II while trying to aggravate the Nazis. Finally, there’s Eric Portman in a brilliant performance as Lieutenant Hirth. Portman’s performance is very captivating as a man trying to maintain his beliefs and instill them in the people he meets.

49th Parallel is a compelling war film from Michael Powell and Emeric Pressburger featuring a superb cast that includes Eric Portman, Leslie Howard, Laurence Olivier, and Anton Walbrook. While it’s a film that might not have the grandeur as later Powell-Pressburger films like The Red Shoes, it is a film that is intriguing for its study of men who are on the other side of war. Particularly as it gives a more dimensional characterization to men who are Nazis during the early stages of World War II. In the end, 49th Parallel is stellar film from the great duo of Michael Powell and Emeric Pressburger.

Powell-Pressburger Films: The Spy in Black - (The Lion Has Wings) - Contraband - (An Airman’s Letter to His Mother) - One of Our Aircraft is Missing - The Life and Death of Colonel Blimp - (The Volunteer) - A Canterbury Tale - I Know Where I’m Going - A Matter of Life and Death - Black Narcissus - The Red Shoes - The Small Black Room - (Gone to Earth) - The Tales of Hoffmann - (Oh… Rosalinda!!!) - (The Battle of the River Plate) - Ill Met by Moonlight - Peeping Tom - (They’re a Weird Mob) - (Age of Consent) - (The Boy Who Turned Yellow)

Nice review. This might be my favorite Powell and Pressburger film even if it's not as flashy as their later work. The story is really ingenius and the great acting and editing help a lot. For a propaganda film it holds it remarkably well.

It is a good propaganda film considering that it was made to warn the U.S. about Nazi Germany. Plus, it was a good character study about how the Germans tried to instill their ideas to people like the Hutterites. Yet, that scene with Anton Walbrook where he delivers that monologue was the best scene for me.