The Boss of It All

Originally Written and Posted at Epinions.com 3/11/09. 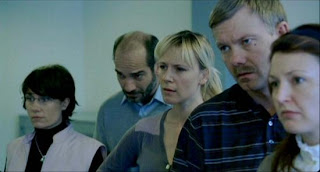 After the release of Manderlay in 2005, which was the second part of Lars von Trier's USA-Land of Opportunities trilogy. The eccentric yet controversial Danish director decided to take a break from his trilogy due to its budget as well as trouble to get the third part Wasington going for development. Instead, the director decided to experiment once again with new technology while making something completely different from any of his other films. Breaking away from his more dramatic work for a comedy, von Trier decided to make a film about a company boss selling his copy due to the fact that he has no superior to work for. The film is entitled Direktoren for det hele (The Boss of It All).

Written and directed by Lars von Trier, Direktoren for det hele is an experimental comedy about an information technology superior asking an actor to play his boss in hopes to sell his company. Using the Automavision software in which allows the computer to choose the shot of choice and to move the camera with the director watching. It's an experimental film that allows von Trier to play with technology while doing something less ambitious than his previous film trilogies. Starring Jens Albinus, Peter Gantzler, Fridrik Thor Fridriksson, Benedikt Erlingsson, Henrik Prip, Mia Lyhne, Casper Christensen, Iben Hjejle, Louise Mieritz, Anders Hove, Sofie Grabol, and von Trier regular Jean-Marc Barr. Direktoren for det hele is an eccentric, unconventional, and exhilarating film from Lars von Trier.

An IT boss named Ravn (Peter Gantzler) is planning to sell his company to an Icelandic company and its boss Finnur (Fridrik Thor Fridriksson). The only problem is that Ravn is not a traditional boss as his employees don't take him seriously because of his heartwarming persona. Ravn instead hires an actor named Kristoffer (Jens Albinus) to play the fake boss named Svend E. Kristoffer takes the job offer for some money but wanted more information to play his character. In the role of Svend, he meets his six main employees where he gets attacked by one of them named Gorm (Casper Christensen). Turning to Ravn for help, Kristoffer continues to develop the character of Svend while one of its senior officers in Lise (Iben Hjejle) suspects that he isn't who he really is as she tries to seduce him. Svend listens to the plans of Gorm and Nalle (Henrik Prip) about some patents while another employee named Heidi (Mia Lyhne) has a crush on him.

When Svend returns to his office one day as he expects another sexual session with Lise, he gets a surprise visit from his ex-wife Kisser (Sofie Grabol), who works as a lawyer for Finnur. Kristoffer turns to Ravn as things start to get troubling while Kristoffer becomes concerned for all of his employees including the despondent Mette (Louise Mieritz) and the American officer Spencer (Jean-Marc Barr). During a meeting with Finnur with a translator (Benedikt Erlingsson), Svend makes moves that would upset Ravn. Realizing of Ravn's intentions to sell the company along with information he heard from Kisser, Lise and other employees, he decides to expose Ravn for who he really is.

The film in von Trier's words is a comedy yet it's a film that doesn't have much humor when really, it's von Trier being the deconstructionist of a film about a company boss hiring an actor to play his boss for a deal. Then the actor takes on the role very seriously as he plays boss in hopes to expose the real boss of it all. The film's plot and story is simple though its approach is very unconventional as von Trier plays the film's narrator for a few scenes between the film to introduce new characters and such. Therefore, the fourth wall is broken, even in the beginning of the film with a shot of von Trier on a crane camera talking to his reflection on the building windows.

The direction is very unconventional as von Trier uses a computer for a lot of the shots he chooses. Also serving as the film's uncredited cinematographer, von Trier mostly goes for intimate shots where the look of the film would change from normal, white lights to a shot in light blue with filters in the office scenes. The film is shot mostly in a real office building with several locations for the meetings between Kristoffer and Ravn. It's clear that what von Trier is doing as a director is deconstruct the idea of a film as he's using technology to create a film that is unsettling and unpredictable. Though at times it doesn't work and does distorts its pacing, it's clearly a film that has von Trier being the unpredictable prankster that he is.

Editor Molly Marlene Stensgard does excellent work to the film's unconventional tone with a large use of the jump-cuts to create an unsettling, rhythmic feel to the film to make it seem jerky and baffling the audience a bit in terms of its dramatic tension. Set decorator Simone Grau does nice work with the look of the offices with its marker boards, desks, and various office decorations. Sound specialists Kristian Eidnes Andersen and Ad Stoop do nice work in capturing the intimate sounds of the film's interior locations along with the broad sound of the exterior locations where Ravn and Kristoffer meet.

The casting is phenomenal with mostly Danish and Icelandic actors filling in the role including Anders Hove as a man waiting to have a meeting with the head boss of the company. Longtime von Trier cohort Jean-Marc Barr is funny as an American trying to speak Danish throughout the film while Benedikt Erlingsson is good as Finnur's translator. Henrik Prip is good as the mild-mannered Nalle along with Louise Mieritz as the despondent, emotional Mette who often screams when the copy machine turns on. Casper Christensen is very good as a senior officer who gets upset over bad rural comments made by the boss while Mia Lyhne is excellent as Heidi, an officer who has a crush on Svend, especially over emails they shared. Sofie Grabol is fine as Kristoffer's ex-wife Kisser who knows what is really going on while annoying him eating peanuts with the peanut shells.

Fridrik Thor Fridriksson is pretty good as Finnur, an Icelandic company boss who despises the Danish people while hoping to get a deal so he can make changes out of anger. Iben Hjejle, famous for her work in Stephen Frears' High Fidelity, is great as Lise, a senior officer trying to figure out what's going on while seducing Svend for her own gain and to see if he's not a homosexual. Peter Gantzler is brilliant as Ravn, a sentimental, loveable boss who can't discipline or be mean to people as he turns to Kristoffer for help. Instead, when Kristoffer turns the tables on him, he suddenly becomes furious as he realizes what Kristoffer tries to do. Finally, there's Jens Albinus in an amazing role as Kristoffer. An actor who plays a role that doesn't become fully developed as the film progresses where he takes on the role fully while talking about the Gambini method throughout the entire film.

Direktoren for det hele is an excellent yet unconventional film from Lars von Trier. With a great cast and experimental approach to the film, it's one of von Trier's most interesting films to date. Though it's not an easy film to watch with its lack of a really strong story and lack of conventional humor. It's a film that has von Trier being the deconstructionist in how he views genres and storytelling. Even though it's a minor film from the director, Direktoren for det hele is still a film worthy to see from the brilliant yet unconventional prankster that is Lars von Trier.