The Element of Crime 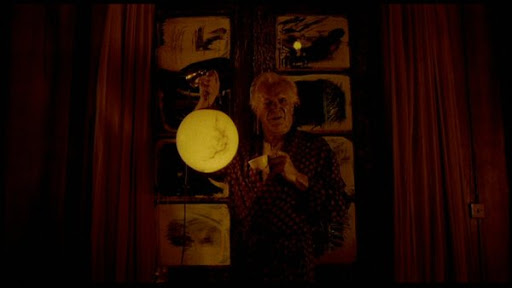 Born in Copenhagen, Denmark in 1956, Lars Trier was a child actor to Communist parents before going to film schools and workshop where he earned his craft as a filmmaker and added "von" to his namesake. Amidst the time of Scandinavian cinema, the industry there was in decline and with old filmmakers of the past already being respected, they had nothing to prove. For von Trier, he saw this and everything as a decline of European civilization and ethics so the pretentious young director crafted a trilogy chronicling Europe's disintegration set in post-modern eras. He began the trilogy with his first film entitled Forbrydelsens Element (The Element of Crime).

Written with Tom Elling and Tomas Gislason based on Niels Vorsel's story with additional English dialogue, Forbrydelsens Element is stylish, film-noir crime thriller set in post-modern, water-logged Europe as a detective returns to Europe after 13 years to investigate a murder that is occurring concerning Lotto tickets. With help from an old advisor, the detective must contend with a killer who could be dead along with a gun-toting police chief, a Cairo therapist in his head, and an Asian hooker. Many years before the imperfect, stripped-down visual styles of movies like Breaking the Waves, Dogville, and Dancer in the Dark, Forbrydelsens Element doesn't seem like a movie that would be shot by von Trier. Yet the film's tone, camera aesthetics, and bizarre storylines are purely von Trier working with style. Though not up to par with his latter-day, groundbreaking films, Forbrydelsens Element is a hell of a debut feature from von Trier.

A European detective named Fisher (Michael Elphick) has returned to Cairo from Europe two months ago where he meets a therapist (Ahmed El Shenawi). The therapist asks Fisher to go back to two months ago to his story where Fisher tells a story about his return to Europe after being in Cairo for 13 years. Fisher has been asked by Osborne (Esmond Knight), his old advisor, to investigate a series of murders involving little girls with lotto tickets that has been tagged the Lotto Murders. Fisher sees Europe has become a place filled with water where there had been strange rituals of men jumping off construction towers from a rope. Upon his arrival, Fisher meets with his old police friend Kramer (Jerold Wells), who is now the chief of police. After meeting a little girl who Kramer tried to shoot, Fisher decides to stay at the town to investigate the murder.

After another meeting with Osborne, whose state of mind has become erratic, Fisher decides to use Osborne's Element of Crime book to guide him in the investigation as he notices the murders were done in four different towns like a square. After learning from Osborne that a man named Harry Grey, who is presumed dead, did the murders. Going through the first town of the murders, Fisher takes in Grey's name where he goes into a brothel and meets with a prostitute named Kim (Me Me Lai). Kim knew about Grey since she had met him before and thinks Fisher is Grey. After going through hotels and several towns, Kim joins Fisher in the investigation. Fisher learns more of the type of killings Grey has done and his victims while he would often have sex with Kim, just to have time to think.

After searching the four places where the bodies were found, he learned of a fifth location and learned that there were seven instead of four. The seventh murder was yet to take place. Fisher turns to Kramer for help to find the sixth body. Suddenly, Fisher's mind unravels more and more as he starts to enter into Grey's mind. Learning the murder is shaped in the letter H, Fisher goes to the final place for the coming murder where he meets the Schmuck of Ages (Lars von Trier) and learns more about Kim's connection to Grey. Finally, Fisher gets ready for Grey's appearance only to descend into madness and learning the truth about the murders while the therapists he talks to wonders if Fisher's mind was in Cairo or still in Europe.

While Forbrydelsens Element doesn't have the imperfect tone of his latter-day films, the movie does have a nice, stylish noir-tone many thanks to von Trier's bleak, post-modern vision. While the film's only flaw, aside from its lack of originality in comparison to previous noir-films, is that the film moves a bit slower due to its stylized dialogue and premise. Still, the film succeeds in giving the film noir genre a new, European tone with von Trier’s wondrous camera shots with his crane shots, slow-mo sequences, and hand-held movements.

The film's script is also very strange with its post-modern bleak outlook and its European surroundings where everything begins to fall apart. Even the film's twists and surprises become shocking due to the behaviors of its characters. While von Trier's script with his collaborators including Mogens Rukov (a collaborator and specialist in the Dogme 95 movement), it's von Trier the director that is really entrancing to watch. Especially with how he views things including violence, morals, rituals, and sex where there is an oral sex scene in the film though we don't actually see it, fully.

Helping von Trier with his maddening vision is cinematographer Tom Elling, who helps bring a septa-looking, orange-colored photography with very brief hints of blue. Elling's cinematography really helps give the film that post-modern look that is part sci-fi, part crime thriller. With production designer Peter Hoimark help bringing a chaotic, broken look to post-modern Europe, the film does have a strange, sci-fi look, especially since it's set in a world surrounded by water. The water photography is very eerie with its orange-colored look that is captured wonderfully in the stylized editing by Tomas Gislason. Helping with that film's strange tone is a score by Bo Holten who brings that sense of post-noir orchestral score and ominous string arrangements while the music sounds like it's made by electronics when really, it's from an orchestra.

The film's cast is wonderful with von Trier and Rukov; both bringing in wonderful cameos with their dubbed voices while Janos Hersko is hilarious as a quirky, offbeat coroner in the autopsy scene. Ahmed El Shenawi is excellent as the therapist though he carries a strange, narrative presence to the film that is very brooding when he's speaking with Fisher. Astrid Henning-Jensen is wonderful in her small performance as Osborne's maid while Me Me Lai is gorgeous and cunning her in role as Kim, who might not be innocent as she seems. British actor and former Benny Hill regular Jerold Wells gives a sadistic crazed performance as Kramer with his hard-nosed ethics and radical ideas that makes him likely to be a suspect.

Esmond Knight is wonderful as Osborne, with his wise but erratic role where Knight brings a complex, strange performance as a man who could be losing it and has descended into madness. The film's best performance goes to the late Michael Elphick in his role as Fisher. Elphick brings a troubling, scary performance as a detective that nearly loses his mind while in the end, we don't know how far he's gone as Elphick displays a determination and deceit in a detective role that is more complex than in previous roles of the genre.

The 2000 Region 1 DVD from the Criterion Collection presents the film in its original 1:85:1 theatrical aspect ratio that is enhanced for 16x9 televisions under a new digital transfer that was supervised by Lars von Trier plus Dolby Digital Mono. Featuring optional English subtitles for the hearing impaired as well as a trailer for the film that could be considered to be a red-band trailer.

The only special feature in the DVD is a Stig Bjorkman's 52-minute documentary Tranceformer: A Portrait of Lars von Trier. The film is an exploration of von Trier's career from his early years to the release of Breaking the Waves while working on the second part of his horror miniseries The Kingdom. The film reveals von Trier's own phobias along with some old TV footage of von Trier as a child actor for Scandinavian television. Bjorkman's documentary features some humorous moments as well as some amazing shots that revels into von Trier's life along with making-of footage for Breaking the Waves including interviews with longtime collaborator Morten Arnfred, producer Peter Aalbaek Jensen, and actors such as Katrin Cartlidge, Jean-Marc Barr, and Ernst-Hugo Jaregard. It's a great documentary that is a must-see for von Trier fans.

The DVD also includes a booklet that features an essay from Peter Cowie. Cowie's essay explains the film's importance to the history of Scandinavian cinema and how it would mark the arrival of von Trier into the film world. It's a short but fascinating essay that discusses the film and why it remains a debut that haunts people since its release.

Forbrydelsens Element is a wonderful, stylish film debut from Lars von Trier that really puts another strange spin on the genre of film noir and sci-fi. While it doesn't have the more honest, aesthetic approach of movies like Breaking the Waves or The Kingdom TV miniseries. Forbrydelsens Element does echo a lot of those things to come from the Danish enfant terrible. Fans who loved Breaking the Waves, The Kingdom, and Dogville will surely find something different from von Trier where this film would win a technical prize at the Cannes Film Festival.

Since this film is part of von Trier's European trilogy that would follow with 1987's Epidemic and 1991's Europa, seeing this film will show why later on, von Trier would rebel against that style. While Forbrydelsens is more clever than the post-modern noir films that would later come out, we can see that von Trier would stray far away from it when that genre became to stale. In the end, Forbrydelsens Element is a strange, complex film from international cinema's resident bad boy, who as just getting started.

Lars von Trier Reviews: Epidemic - Medea - Europa - The Kingdom I - Breaking the Waves - The Kingdom II - Dogme #2-Idioterne - Dancer in the Dark - The Five Obstructions - Dogville - Manderlay - The Boss of It All - Antichrist - Dimension (2010 short) - Melancholia - Nymphomaniac - The House That Jack Built - The Kingdom: Exodus - (Etudes)