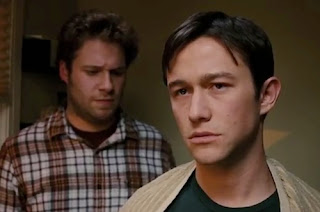 Directed by Jonathan Levine and written by Will Reiser, 50/50 is about a young man who learns he has a cancer as he tries to come to terms with it. With a best friend and a young psychiatrist trying to help him, he also tries to deal with various other individuals who are going through other sorts of illnesses. The film is based on Reiser’s own experience with cancer as he also puts a new spin into the cancer drama by injecting humor into the story. Starring Joseph Gordon-Levitt, Seth Rogen, Anna Kendrick, Bryce Dallas Howard, Philip Baker Hall, Matt Frewer, and Anjelica Huston. 50/50 is an extraordinary yet heartfelt film from Jonathan Levine.

After learning he has a rare cancer in his back, Adam (Joseph Gordon-Levitt) realizes that his whole life is about to change as he tells his friend Kyle (Seth Rogen) and his girlfriend Rachel (Bryce Dallas Howard) about it. After telling his mother (Anjelica Huston) about the cancer and what he has to, she is overwhelmed as she is also trying to take care of his father (Serge Houde) who is currently suffering from Alzheimer’s disease. Taking various chemotherapy treatments and meeting fellow cancer patients in Mitch (Matt Frewer) and Alan (Philip Baker Hall), Adam also takes in some therapy sessions with a young therapist named Katherine (Anna Kendrick). With Kyle helping him out by trying to get books and such, Adam notices that Rachel has been distant leading to some troubling issues with the two.

Adam also tries to distance his mother, whom he felt has been dealing with a lot, as he befriends Katherine who is just trying to figure things out though she is new to her job. While Kyle also tries to be involved by getting Adam be social, the two do hang out with Adam’s new cancer friends as they all try to cope with their situations. While Adam realizes that he has a 50/50 chance of surviving the cancer and that it might be more complicated, he tries to cope with everything as he seeks help from the people who are closest to him.

Films that often revolve around cancer often can lead to huge sentimental moments as they delve into the kind of films where the audience is in tears. In this film, there’s bit of that as it’s balanced by humor as a lot of is based on screenwriter Will Reiser’s own experience with cancer. Though Adam is only 27-years old, it is proof that cancer is a mysterious disease where things just happen for some reason. Throughout Adam’s journey, there’s moments where he can be relax and just be cool with it. Then, there’s moments of frustration and anger because he can’t control his own situation.

Reiser’s script works in the way Adam is presented as a human being with flaws as he is just trying to deal with the idea that he might die. The people around him such as his best friend Kyle, his girlfriend Rachel, and his mother are all trying to cope with it in some way. Though the character of Rachel is sort of under-written, Kyle and Adam’s mother do get more to do as the former is just a fun-loving guy that is doing all he can to help out his friend though uses his friend’s cancer to simply get laid. Adam’s mother is a woman that is going through a lot with her husband suffering from Alzheimer and learning that her son has cancer is evident that even though she can extremely worried. It’s only because she really cares for her son. Then there’s Katherine who is an outsider as she’s just a young therapist with not many patients as she is just trying to understand what he’s feeling and what she wants to do without doing it the wrong way.

Reiser’s script works to study the situations while providing humor to Adam’s situation without being very silly. The humor is more light-hearted and driven by dialogue so that Adam can at least have some joy around him in his awful situation. It’s a script that is truly engaging without going into the traps that most films relating to cancer or other disease where it often leads to very sentimental, heavy-handed moments.

Jonathan Levine’s direction is quite straightforward for the way he presents the film. Yet, he does put a bit of a stylistic flair for a few scenes such as Adam getting out of his first chemotherapy session stoned out of his mind. Another key stylistic moment that actually works is the way Adam responds to the news where it’s all in the sound design and camera work to emphasize what he could be reacting as it’s shot from the back of his head. The humor and dramatic elements in Levine’s direction is definitely more restrained but he knows when it is time to pull the heavier moments without going overboard. The overall direction is truly spectacular as Levine creates a film that is very real but also done in a humorous, light-hearted tone.

Production designer Annie Spitz, along with set decorator Shane Vieau and art director Ross Dempster, does a very good job with the set pieces created such as Adam‘s home which is filled with lots of things including Rachel‘s paintings. Costume designer Carla Hetland also does a good job with the costumes as the characters dress very casually while Rachel is more stylish to emphasize her arty world. Sound editor Robert Jackson does a great job with the sound work that includes the scene where Adam hears about his cancer which creates an unsettling mood that seems very real to how one reacts to news like this.

The film’s score by Michael Giacchino is more low-key than his previous scores as it delves into an indie-folk style with a few orchestral flourishes that underplays the drama and humor present in the film. The soundtrack, that is assembled by Jim Black and Gabe Hilfer, is brilliant as it features an array of indie music plus some very memorable contributions from acts like the Bee Gees, Radiohead, and Pearl Jam.

The casting by Sandra-Ken Freeman and Francine Maisler is superb as it features some memorable small appearances from Donna Yamamoto and Andrew Airlie as the doctors who help Adam out along with Serge Houde as Adam’s father who is suffering from Alzheimer. Matt Frewer and Philip Baker Hall are excellent in some funny performances as a couple of cancer patients who each provide some insight to Adam in his situation. Bryce Dallas Howard is pretty decent in an underwritten role as Adam’s girlfriend Rachel as someone who cares about him but is more interested in her world rather than take care of Adam. Anjelica Huston is brilliant as Adam’s mother who is trying to deal with all of the illness around her as she brings a bit of humor to her character as she is someone who means well though can be a bit overwhelming in a funny way.

Anna Kendrick is wonderful as Katherine, Adam’s therapist whose inexperience manages to win Adam over as she also tries to deal with her own issues and trying to be the best shrink she can be. Seth Rogen is excellent as Kyle, Adam’s best friend who tries to help him out while trying to cope with Adam’s illness by having him and Adam go out and party. Finally, there’s Joseph Gordon-Levitt in a fantastic performance as Adam. Gordon-Levitt brings a real sense of humanity to a character that is going through this horrific ordeal while trying to make sense of everything. Gordon-Levitt isn’t afraid to make Adam into someone that is flawed but also engaging in the way he handles things as it’s another outstanding performance from the young actor.

50/50 is a smart yet touching comedy-drama from Jonathan Levine that features a captivating performance from Joseph Gordon-Levitt. With a great supporting cast that includes Seth Rogen, Anna Kendrick, and Anjelica Huston, it’s a film that doesn’t sentimentalize the idea of cancer while bringing some more life and humor into what people go through. It’s also something where the audience can actually be fine with the idea of laughing at these situations while without going into very silly jokes with a lot of comedies. In the end, 50/50 is a marvelous yet winning film from Jonathan Levine.

Probably my favorite film of the year, even though that's not saying much. It just blends comedy and drama together so well where I was laughing my ass off but then the next second, I was so close to getting the Kleenex. Also, is it me or does it seem like Gosling and Gordon-Levitt are going to be the next De Niro and Pacino for the next generation? Maybe this is just random but I don't know. Nice review Steve. You always have great points.

Thanks Dan. I was surprised by the film because of how funny it was but also how dramatic without going overboard. I think Gosling and Gordon-Levitt are the best actors right now. I wouldn't compare them to de Niro and Pacino considering the shit movies they're making now.

I will confess, I was reluctant to see this because my grandmother passed way in late August due to stomach cancer. It still stings a bit but at least I was able to give her one final hug before she left.