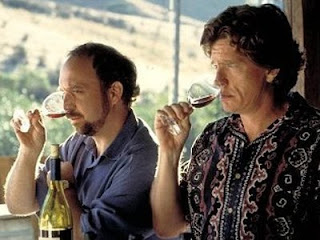 Since his 1996 feature film debut for the abortion comedy Citizen Ruth, Nebraska filmmaker Alexander Payne brought a mix of Americana and irreverent offbeat humor to many of films often based on books that he and longtime co-writer Jim Taylor adapted into scripts. In 1999, Payne released a hilarious satire film entitled Election about a high school election gone insane that became a breakthrough for Payne as it won him loads of acclaim including the prestigious New Generation Award from the L.A. Film Critics Association. In 2002, Payne and Taylor released About Schmidt, based on the novel by Louis Bagley. A more harrowing film than his previous efforts, About Schmidt still contained its irreverent but restrained humor largely due to lead actor Jack Nicholson's surprisingly quiet, restrained performance as an old man dealing with age and his existence. The film was also a hit as Payne in 2004 re-emerged with Taylor once again for another adaptation, this time for the Rex Pickett novel entitled Sideways.

Sideways is a movie about a failed novelist named Miles and his out-of-work actor buddy Jack going on a one-week trip to North California to sow their wild oats while trying out new wines in various winery places. With Jack getting married in a week, Miles tries to give him a last week of freedom only to learn more of his own failures while the men deal with everything about themselves. Then after meeting a couple of women in a town in North California, Miles deals with his own failures while trying to find some sense of hope and good wine. Starring Paul Giamatti, Thomas Haden Church, Virginia Madsen, and Payne's real-life wife Sandra Oh. Sideways is one of the most original and heartfelt comedies of 2004.

Miles Raymond (Paul Giamatti) is an 8th grade English teacher trying to catch a break as a novelist as he drives from San Diego to L.A. to pick up his best friend Jack (Thomas Haden Church) for a week trip before Jack's wedding to Christine (Alysia Reiner). After meeting Christine's family, the two head to Northern California for a wine exhibit as they stop to spend the night at the home of Mile's mother (Marylouise Burke). Mile however, remains haunted by the fact that he's a failure and already failed in his marriage to Victoria (Jessica Hecht). Upon arriving to the California vineyard, they stop to examine wine as Miles expertly tries different wines as stop at a town near Los Olivos to stay.

After a meeting a waitress named Maya (Virginia Madsen), who knows Miles over his wine expertise, at a restaurant. Jack claims they're celebrating over the publication of Miles' upcoming novel which isn't true as they continue to go wine-tasting where they meet another expert in the free-spirited Stephanie (Sandra Oh), who is also a friend of Maya's. Jack becomes smitten with Stephanie as Miles and Jack go to dinner with Maya and Stephanie to discuss wine as Miles still mopes over his ex-wife. Later that night at Stephanie's house for more wine-tasting, Miles and Maya talk about the brilliance of wine as well as the fact that they're both dealing with failed marriages. With Jack spending more time with Stephanie, Miles tries to deal with his own issues as the two go golfing one day where Jack tries to get Miles out of his slump.

During a lunch with Maya and Stephanie where they meet Stephanie's daughter Siena (Natalie Carter), Miles finds himself smitten with Maya where things seem to go well until he accidentally reveals about Jack's upcoming wedding. Things get worse when Miles learns about his novel as he vents out where the day worsens over what he revealed to Maya about Jack. Jack's womanizing ways starts to get him in trouble after flirting with a waitress (Missy Doty) where he asks for Miles help to deal with her husband (M.C. Gainey) as Miles wonders if there's any kind of hope for him.

Where in previous films, Alexander Payne took the time to establish himself as a director with irreverent satires of Citizen Ruth and Election while blending comedy and drama for About Schmidt. In Sideways, Payne not only fulfills his potential but also now becomes the most leading American auteur filmmaker for his heartfelt view of humanity while finding its inane humor in the smallest of things. Payne brings a creatively intelligent film with stylized split-screens and wonderful images where he moves the camera into giving a wonderful yet complex view of America. With his longtime co-writer Jim Taylor, the film's script is filled with hilarious moments and lines along with great emphasis on wine tasting and the kind of wine that is good. This film will make thirsty for some wine but it's really an adult film with a nice balance of romance, drama, and restrained comedy where Payne and Taylor bring out their best work to date where they click with every funny and sad moment in the right places.

Helping Payne with his vision is cinematographer Phedon Papamichael who beautifully captures the wonderful world of California wine fields and the Californian towns, which has a sense of purity and color that is truly imaginative. With Payne's longtime editor Kevin Tent bringing in a nice, masterful editing style in tune with the multiple-screen shots in the film, the film moves nicely as it doesn't move too slow or too fast for Payne's subtle, sublime story. Helping out more in the visuals is Payne's longtime art team of production designer Jane Ann Stewart and art director T.K. Kirkpatrick for giving a nice detailed view of the Californian wine world with its tan-like colors and wooden images where the movie gives you that great feeling that you're in a winery while longtime costume designer helps give personality to the clothing for its characters.

Then there's the film's music from longtime Payne collaborator Rolfe Kent who brings a lovely jazz score filled with bouncy rhythms and touches of melancholia that serves as an accompaniment to the varied mood of Miles along with music from Bonnie Raitt and Luna.

Then there's the film memorable if small cast, which includes some nice performances from Marylouise Burke as Mile's mother, Jessica Hecht as Victoria, Alysia Reiner as Christine, and Missy Doty as Cammi. Still, the film revolves solely on its four main actors. Sandra Oh is vibrantly amazing as the free-spirited Stephanie with her whimsical expertise on wine and down-home sense of humor while being vivacious in her sexiness as she carries some great scenes with Thomas Haden Church while stealing the show in the scene where she breaks his nose. Virginia Madsen truly gives the greatest performance of her career as the soulful Maya with her love for wine and life. Madsen not only brings great chemistry with Paul Giamatti but a wonderful depth in their conversation scenes as Madsen glows in her understatedly, rich performance as she and Oh are both worthy for Supporting Actress nods in the Oscars.

Thomas Haden Church is hilarious and amazing as the chauvinist Jack with his selfish, egomaniacal ways and immature behaviors. Church is really the comedy of the movie by doing stupid things where he and Giamatti have great scenes despite their different personalities where Church also has depth where he's trying to protect Christine from his affairs with Stephanie. Church is just filled with depth in his comedy, as he also deserves some recognition for his performance. Paul Giamatti is the film's best performance for his complex mix of emotionally depressed and self-defeating in the role of Miles. Giamatti shows that his performance in 2003's American Splendor was no fluke where he uses his shadowy eyes and face to bring out every sense of sadness into his role. While he maybe the role of a loser (though Church is playing the bigger loser), Giamatti brings sympathy to his role despite his selfishness and self-loathing where he also carries a sense of charm and heart as this role is truly one of his best of his flourishing career.

Sideways is a funny, warm masterpiece from Alexander Payne and company with great performances from Paul Giamatti, Thomas Haden Church, Virginia Madsen, and Sandra Oh. Thanks to Payne's subtle, restrained humor and warm drama filled with romance and life lessons, the film is one of the brightest pieces of American cinema as Payne now becomes a director with a vast imagination. While not as funny in some parts in comparison to previous films, Sideways works more in its mix while giving away some great emphasis on wine tasting. If there's a nice movie that you can laugh and be moved at while getting a fine taste of wine, Sideways is the movie to go see.

Not a wine drinker but I really enjoyed Sideways. Nice post.

Thank you. I don't drink wine either nor any alcoholic drink.

I love this film. Giamatti and Hayden-Church make one of the best buddy duos ever.

I have to say that I really did like this film, mainly because of Payne's great screenplay. However, I couldn't really connect to it as much probably because I'm only 18 but I still liked this film so much. Nice review Steve.

@Andy-Thanks. It needed a new look. It is one of my favorite films of the last decade and it's very funny.

@Dan-It's an adult film and I first saw it when I was 23. It's one of those films that when you get older, you identify with it.

The Kid In The Front Row said...

As time has gone by, I see it less as a masterpiece, but still a wonderful movie.

@The Kid in the Front Row-At the time I saw it, I thought it was the best film of 2004. Yet, as I got older and saw it again. I still enjoyed it but found myself liking Eternal Sunshine of the Spotless Mind more. Both are great movies as they each offer something different to audiences.