LAMB Movie of the Month: Bronson 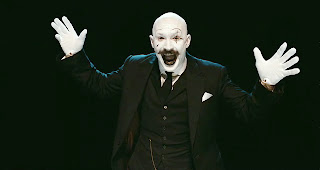 Bronson is about the life of Michael Gordon Peterson who became one of the most notorious criminals in Britain as he led most of his prison sentence in solitary confinement. Directed by Nicolas Winding Refn and written by Refn and Brock Norman Brock, the film is an exploration of the man’s life from the son of a respectable family to one of the most infamous men of the British criminal world. For the role of Peterson, Tom Hardy plays the man who also calls himself Charles Bronson after the famed actor. Also starring Matt King, James Lance, Amanda Burton, and Jonathan Phillips. Bronson is an extraordinary yet unflinching portrait of a disturbed man from the vision of Nicolas Winding Refn.

Ever since he was a boy, Michael Gordon Peterson was a lad who caused trouble whether getting into fights with kids or teachers in school while later growing up to work at a chip shop where he commits his first crime. After getting married to woman named Irene (Kelly Adams) and having a child, Peterson robs a post office where he gets a 7 year prison sentence. Prison however, turned out to be a place that Peterson can call home where he’s popular with the prisoners and hated by the guards he always fight with. Yet, he gets transferred from one to another before finally going into a psychiatric hospital where he’s been sedated from fighting.

When a pedophile (Richard Jones) suggests to Peterson about doing something awful, Peterson is unable to fight back until the sedative wears off where he was able to do something. Transferred again to another psychiatric hospital, all hell breaks loose as Peterson causes more trouble where he gains notoriety and freedom. Back in the outside world with his parents (Andrew Forbes and Amanda Burton), Peterson travels back to Luton to live with his uncle Jack (Hugh Ross) where he becomes a bare-knuckle boxer through connections from a former prison mate in Paul (Matt King). Though he’s a success and has a new girlfriend in Alison (Juliet Oldfield), it doesn’t last as he returns to crime and back to prison.

Yet, prison would be his playground as he goes by the name he’s given as a boxer in Charles Bronson. In order to challenge the authority of the prison governor (Jonathan Phillips), Bronson creates an array of crazy stunts while finding another outlet through the help of an art teacher (James Lance). Through this new outlet, Bronson would find his way to even more infamy.

The film is about the life of a notorious British prisoner told from the perspective of the man as he imagines himself talking about his life story on the stage to an imaginary audience. Throughout the film, he comments about his own situations as well as revealing his love for the world of prisons which he feels is his home. Yet, Charles Bronson is not a typical man who doesn’t fit in by the rules of society as he is someone that is set out to make his own rules. He’s not an entirely bad man but a real misunderstood individual that just likes to create chaos through any means.

The screenplay works well into how it studies Bronson from this petty thief who is just trying to support a family and fulfill his own violent desires into someone who finds a home in the prison sentence. There, he can fight guards and act all rowdy but when he’s transferred to this psychiatric hospital. He’s doing things against his will where he would find a way to get out of the hospital and later use his notoriety to be free. When he returns to society, it becomes a problem which would eventually lead to prison where he would find his true calling in life.

The direction of Nicolas Winding Refn is truly visceral in terms of the way violence is present but also in a humorous yet whimsical tone throughout the entirety of the film. Refn always makes sure that the Bronson character is in the frame whether it’s in a close-up or from a huge distance. At the same time, Refn doesn’t choose to play nice when it comes to the violence whether it’s from Bronson or the people attacking him. The camera is always moving to the rhythm of what Bronson is doing whether it’s a slow-motion presentation for stylistic reasons or to simply build momentum for something crazy to happen.

For the scenes on the stage where Bronson is on stage telling his story, it’s the humor of Bronson’s presentation that makes it very engaging as he doesn’t sugarcoat nor exaggerate the stories he’s telling. Yet, he is also not afraid to make fun of himself nor be unflinching as he is often seen through makeup at times or is inside a cage. There’s an intimacy to it that is quite entrancing to watch in the way Refn directs these scenes while knowing that when he’s out of the cage. All hell is going to break loose as Refn truly creates what is definitely a mesmerizing yet uncompromising film about a notorious figure that craves any kind of attention he can get.

Cinematographer Larry Smith does an excellent job with the film‘s stark but colorful cinematography that is mixed in with a bit of static grain for some of the darkly-lit scenes. Smith’s photography also plays it rough while adding some stylish lights for some of the interiors to emphasize the mad world of Bronson. Editor Matthew Newman does a great job with the editing in the use of jump-cuts and dissolves to help the film move unconventionally for the fight scenes or some other stylish dramatic moments in the film.

Production designer Adrian Smith and art director Jane Levick do some fine work in the set pieces such as the cheesy strip club where Paul hangs out at as well as the grimy prisons and hospitals that Bronson encounters along with the stage where he tells his story. Costume designer Sian Jenkins does a nice job with the costumes from the suits that Bronson wears in his stage performance and in the outside world to the more rough-house look that he sports in the prison scenes. Makeup designer Niamh Morrison does some amazing work for the look of Bronson with its mustache and some of the strange makeup that he sports for his stage performances in the film.

The animation of Britt Dunse, which is based on Bronson‘s artwork, is truly a joy to watch for the brief animation sequence presented as a form of dark humor to represent Bronson‘s personality. Sound designer Christian Conrad and sound editor Dominik Schleier do some superb work with the sound work to capture the stark intimacy of the prisons and hospitals as well as its chaotic atmosphere in some of the violent moments of the film. Music supervisor Lol Hammond does a brilliant job with the film’s diverse yet hypnotic soundtrack that includes an array of classical music to electronic music from acts like New Order, Pet Shop Boys, and Glass Candy. The latter of which to emphasize the world of the 1980s but also plays as a very dark accompaniment to Bronson’s world as the overall soundtrack is fantastic.

The casting by Des Hamilton is wonderful as it features some notable appearances from Andrew Forbes and Amanda Burton as Bronson’s parents, Hugh Ross as the lavish Uncle Jack, Kelly Adams as Bronson’s first wife Irene, Juliet Oldfield as Bronson’s mid-period girlfriend Alison, William Darke as the 13-year old Bronson, and Richard Jones as the pedophile that Bronson meets. Other memorable performances from supporting players include Jonathan Phillips as the prison governor, Phil Danielson as the art teacher, and Matt King as the flamboyant Paul who gives Peterson the name Charles Bronson.

Finally, there’s Tom Hardy in an outstanding yet harrowing performance as Michael Gordon Peterson aka Charles Bronson. Shaving his head and putting on more than 40 pounds of muscle, Hardy exudes the man who is truly a one of a kind. He brings a disturbing yet engaging sense of humor to the character while proving that he is someone that no one should get into a fight with. Hardy truly makes this man one of the most interesting characters ever presented around the world as it’s a definite breakthrough performance for the young British actor.

Bronson is a powerful yet thrilling film from Nicolas Winding Refn featuring a tour-de-force performance from Tom Hardy. The film is definitely not easy to watch due to some of the violent and disturbing content presented while it plays up to the haunting visual style that Refn has been known for in his recent films. For people that are new to Tom Hardy, this is the film to check out as his performance is definitely one for the ages. In the end, Bronson is a sensational yet visceral film from Nicolas Winding Refn.

I actually found this one too easy to watch. I felt it was too stylized to have any real impact

I was pretty much into it since it was meant to be quite stylized in what Refn wanted. It was one of the reasons why I enjoyed it.

Well, I can understand with what you didn't like but I was engaged by it because it felt so different from a lot of the films that I had seen. Plus, you can't deny that Tom Hardy gives a performance for the ages.