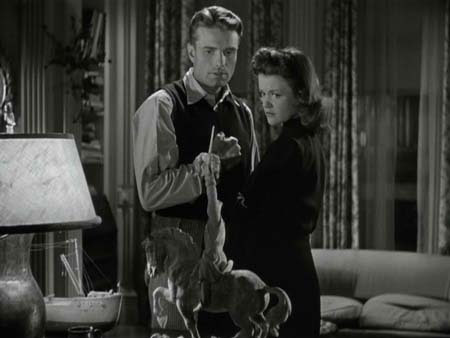 Directed by Jacques Tourneur and written by DeWitt Bodeen, Cat People is about a woman whose new married life is in danger by a curse that she believes will make her into a panther. The film is considered to be one of the finest horror films of the 1940s as it mixed noir and drama to create a fascinating story. Starring Simone Simon, Kent Smith, Jane Randolph, and Tom Conway. Cat People is a stylish yet mesmerizing film from Jacques Tourneur.

Irena (Simone Simon) is a Serbian-born fashion designer who meets a charming architect named Oliver (Kent Smith) at a zoo as the two begin a relationship. The relationship goes well as Oliver is intrigued by some of the things Irena has including a statue of a warrior impaling a cat that Irena claims is King John of Serbia who believes cats are evil. The two get married as they celebrate with friends including Oliver’s business associate Alice (Jane Randolph) where Irena sees a woman who says something to her in Serbian. Suddenly, the newly wedded life of Irena and Oliver starts to deteriorate due to Irena’s behavior as she goes on walks to the zoo as she is fascinated by a panther at the place.

After going to meet Dr. Louis Judd (Tom Conway) for some evaluation, based on Alice’s suggestion, Irena believes she has inherited an ancient curse that turns her into a panther. Yet, her behavior makes her believe that Oliver and Alice are having an affair though it isn’t true despite Alice’s admission that she is in love with Oliver. Irena starts to stalk Alice in secrecy as things between her and Oliver start to sour though Oliver wants to help her. While Dr. Judd believes that something is really wrong with Irena, he tries to stage an intervention where something terrifying starts to happen as Oliver and Alice believe that the story Irena told Oliver could be true.

The film is about a woman who comes from a world where she believes she is part of a group of people that turns into panthers. Though she yearns for a normal life with a man who loves her, her evasive behavior and her fear would eventually drive that marriage apart as he would eventually fall for another woman that is also just trying to be helpful. The script delves into the woman’s anxiety and why she is so consumed with fear as the first act is about the relationship between her and Oliver. The second act is about the marriage and its disintegration due to the fear that she’s having. The third is about her reacting to that fear and how she uses her curse to spread fear against those she feel have wronged her.

Jacques Tourneur’s direction is definitely stylish as he presents the film in different ideas for a lot of the romantic moments as well as the suspenseful moments. For a lot of the light-hearted scenes including the romance and melodrama, Tourneur keeps the direction straightforward in its framing and in the camera movements. Yet, he also utilizes soft close-ups to play up Irena’s emotions and her yearning to be loved. Once the film progresses into something darker, the framing becomes more eerie in a scene where Irena is being examined as it includes a dissolved animated sequence revolving around cats. Then the film becomes more suspenseful where there’s a great scene of Irena following Alice as she walks on her way home as it’s about the rhythm of how the two women walk and the way it sounds.

It adds to the sense of horror that something could happen as there’s little bits of action that happens in the film. Yet, Tourneur manages to play up the suspense by keeping it simple and not show very much. Notably the scene where Alice dives into the pool as she tries to find out what is lurking around that pool. It’s that element of horror and the way that it looks that gives the film a very entrancing look. The overall work that Tourneur does is phenomenal in the way he creates an engaging yet evocative film.

Cinematographer Nicholas Musuraca does an amazing job with the film‘s stylish black-and-white photography for the way he keeps a lot of the lighter moments simple with bright gray. For scenes at night in the interior setting such as Oliver and Alice’s work station and some scenes at Irena’s apartment are gorgeous in the way the lighting is presented including some of the shading as Musuraca’s work is definitely outstanding. Editor Mark Robson does a very good job with the editing by maintaining a methodical pace to play up the film’s suspense while keeping it straightforward for the dramatic moments of the film.

Art directors Albert S. D’Agostino and Walter E. Keller, along with set decorators A. Roland Fields and Darrell Silvera, do a nice job with the set pieces created such as Irena‘s home and the big office that Oliver and Alice work at. The gowns by Renie is wonderful for the way it looks as it plays to the personalities of the women with Alice as very dominant and Irena sporting darker clothing. The visual effects by Linwood G. Dunn and Vernon L. Walker is pretty good for the animation and spirals that is created as it has a sense of charm. Sound recordist John L. Cass does a great job with the sound work to play up the suspense of the film such as Irena following Alice and other suspenseful scenes where the sound is sparse yet chilling.

The film’s score by Roy Webb is brilliant for its somber yet dramatic orchestral pieces including a few chilling arrangements to play up the suspenseful portions of the film.

The film’s cast is excellent as it features an appearance from Jack Holt as a business friend of Oliver and Alice along with Alec Craig as a zookeeper that Irena talks to and Elizabeth Russell as the Serbian woman that talks to Irena at a restaurant. Tom Conway is wonderful as the smart but cautious Dr. Judd who always carries a cane with while trying to figure out Irena as he often talks to Alice and Oliver about Irena. Jane Randolph is great as Alice, Oliver’s friend who is a woman that handles her own business while trying to be a friend to Irena only to realize that something isn’t right about her.

Kent Smith is very good as Oliver, Irena’s husband who tries to figure out what to do while lamenting over her behavior as he finds comfort in Alice’s presence. Finally, there’s Simone Simon as Irena as Simone’s performance is entrancing for the way she despairs over her curse and the idea that her husband is having an affair. It’s a complex yet adventurous performance that allows Simone to be dramatic but also display a dark sense of humor to her character in one key scene of the film.

Cat People is an extraordinary yet spellbinding film from Jacques Tourneur that features a radiant yet haunting performance from Simone Simon. The film is definitely one of the best suspense/horror films of the 1940s as well as a great example of what a film like this could do with a small B-movie budget. It’s also a great introduction for those that is interested of what horror films were like back then where it didn’t have to rely on gore or easy tricks. In the end, Cat People is an engaging yet well-crafted thriller from Jacques Tourneur.