Originally Written and Posted at Epinions.com on 8/6/08 w/ Additional Edits. 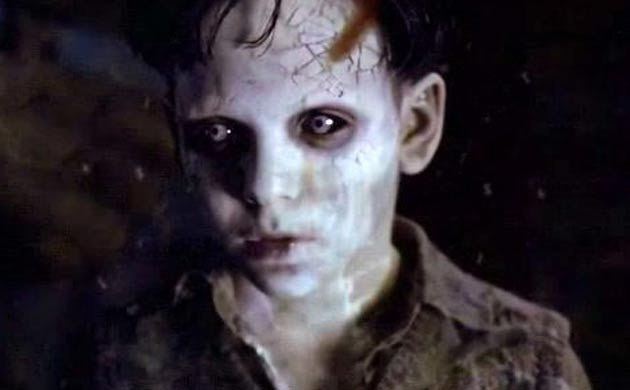 While Guillermo del Toro has been known recently for his work in the Hellboy movies as well as his 2006 award-winning masterpiece El Laberinto del Fauno (Pan's Labyrinth). The Mexican-born director has a unique approach to both fantasy and horror ever since he debuted with 1993's Cronos. While 1997's Mimic was a studio picture that did well modestly and spawning two sequels that didn't involve del Toro. The director still managed to get attention when he was hired to direct the sequel for Blade that some critics thought was more superior than the first film. Yet, before doing Blade II he attracted the attention of reknowned Spanish auteur Pedro Almodovar who read one of his scripts and along with his brother Agustin, the Almodovars decided to produce Guillermo del Toro's eerie horror film entitled El Espinazo del Diablo (The Devil's Backbone).

Directed by Guillermo del Toro which he co-wrote with David Munoz and Antonio Trashorras, El Espinazo del Diablo tells the story of a young boy who goes to an orphanage as his father is currently fighting in the Spanish Civil War. The boy makes some unique discoveries about his orphanage while dealing with a nasty caretaker, a ghost, and other mysterious things until the boy decides to confront them. Described by del Toro as a spiritual companion to El Laberinto del Fauno, the film explores the supernatural as well as fantasy and terror through the perspective of a child. Starring Fernando Tielve, Eduardo Noriega, Inigo Garcias, Junio Valverde, Irene Visedo, Federico Luppi, and Marisa Paredes. El Espinazo del Diablo is a chilling yet fascinating fantasy-horror film from Guillermo del Toro.

It's the middle of the Spanish Civil War as a young boy named Carlos (Fernando Tielve) is being sent to an orphanage somewhere in the middle of Spain. The orphanage is run a stern yet caring one-legged principal named Carmen (Marisa Paredes) and a doctor named Casares (Federico Luppi) as they take Carlos in during this time. Carlos meets the school's bully named Jaime (Inigo Garcias) whom at first, goes into conflict until Carlos discovers a ghost lurking around the orphanage. Staying in the bed that belonged to a deceased orphan named Santi (Junio Valverde), Carlos hears noises as the water jug is broken. Carlos and Jaime decided to get water from the jugs as Carlos discovers that the ghost is none other than Santi.

Carlos also encounters with the abusive caretaker Jacinto (Eduardo Noriega). Jacinto was also an orphan at the place as he's gained contempt for the place as he has sex with Carmen for selfish gain while being surrounded by his fiancee Conchita (Irene Visedo). After an incident at a water pit involving a spat between Carlos and Jaime, things go bad when Jaime fells into a pool where Carlos saves him but also sees the body of Santi. Yet, the boys have another encounter with Jacinto that leaves Carlos with a cut on his cheek. Carlos does manage to befriend Dr. Casares who shares his infatuation with the supernatural while showing him mysterious things that are called the Devil's Backbone.

While Carlos gains respect from Jaime and the other boys over for keeping not squealing, Carlos decides to go further into the investigation over Santi. He also believes that Jaime, who claims to not believe in ghosts, had something to do with it as a meeting with Santi leaves Carlos frightened. When Dr. Casares and Conchita leave to town for money and supplies, Casares learns that the war is escalating as he and Carmen decides to leave. Yet, Jacinto is caught trying to get the gold as Casares confronts him with a rifle as he's banished. With everyone including the children preparing to leave. Something horrible happens when an explosion occurs leaving several of the children wounded. With Conchita deciding to walk to town to get help, Casares leads the charge. Jaime finally reveals to Carlos what really happened with Santi as it involves Jacinto forcing the two boys to confront their tormentor.

While the film in a traditional sense is a horror film, it's more of a psychological, suspense feature about a boy who uncovers dark secrets in an orphanage while helping a ghost find peace over his death that might not have been an accident. What del Toro does in the storytelling department is slowly uncover the mystery over Santi's death while Carlos also deals with the abusive Jacinto who also scares the children. Though the film at times, has a few pacing issues where it would lag a bit and sometimes, rush a bit. Yet, del Toro does create characters that are multi-dimensional with motives and such while using the Spanish Civil War as a template for the tension and fear that surrounds the orphanage.

The direction of del Toro is definitely unique and atmospheric where it's mostly shot in one location as he creates a sense of tension and fear that is expected within the genre. Unlike most horror films that relies on gags and gore, del Toro isn't trying to get audiences to be scared but be scared in what might happen. Yet, del Toro aims more for drama as he creates scenes and compositions to allow a sense of intimacy for some of the interaction between characters. Yet, del Toro's focus on the characters of Carlos and Jaime as two boys try to deal with their own adolescence, Jaime's crush on Conchita, and later on, having to play older brothers to the younger kids at the orphanage. The film also carries visual effects that are more about atmosphere rather than something that's big in del Toro's more mainstream films. The result is a unique yet chilling film from the mind of Guillermo del Toro.

Longtime del Toro collaborator in cinematographer Guillermo Navarro does some excellent work in the film that's more straightforward than his usual palette of sepia-laden colors. Instead, Navarro's daytime shots both interior and exterior emphasize less of flashy lights for natural style of lighting while his nighttime sequences are wonderfully shot in blue colors to create a sense of suspense and horror. Navarro's sepia-drenched colors are shown more in the film's pool sequences that are eerily shot. Editor Luis de la Madrid does excellent work in the film's cutting to convey the suspense and drama that goes on in the film.

Art director Cesar Maccaron and set decorators Pablo Perona Navarro and Pilar Revuelta create a lot of great sets in the orphanage that includes the muddy pool underneath the orphanage, the bomb in the middle of place, and decaying walls. Costume designer Jose Vico does some excellent look in the period costumes though lacks color to convey the eerie, moody tone of the film and times. Sound editor Oriol Tarrago and mixer Miguel Rejas does some wonderful work in conveying the atmosphere of the film with wind, grinding metal for the bomb, and other sound effects that create a chilling tone. Special effects supervisor Alfonso Nieto does excellent work in the film's visual effects with help from makeup artist Jorge Hernandez in creating the ghostly look of Santi.

Music composer Javiere Navarette brings a chilling yet hypnotic score that's more suspenseful and dramatic in comparison to the dream-like score that he created in El Laberinto del Fauno. Yet, the music is more bass-heavy and sweeping as Navarette's score plays up to its sense of horror with screeching violins and heavy arrangements.

Casting director Sara Bilbatua does great work in the film's casting with memorable small performances from Berta Ojea as one of the orphanage's teachers, Francisco Maestre as Jacinto's crime boss, Jose Manuel Lorenzo as Carlos' tutor who drops him off, and Javier Gonzalez and Adrian Lamana as two boys Carlos befriend. Irene Visedo is good as the maid Conchita who is suspicious of Jacinto's motives in the orphanage while realizing that one of the boys has a crush on her. Junio Valverde is excellent as Santi, the deceased boy who haunts the orphanage as he brings a chilling presence that is right for the film’s tone.

Federico Luppi, who previously appeared in del Toro's Cronos, is great as the fatherly Dr. Casares. A man who shares Carlos' belief in the supernatural while professing his love for Carmen while aware of the dark presence that is Jacinto. Almodovar associate Marisa Paredes is also great as the headmistress Carmen who is trying to run a school as she is forced into affairs with Jacinto for her own pleasures only to be manipulated. Eduardo Noriega is brilliant as Jacinto, a villain whose hatred for children and the orphanage is a man who is just simply trying to get gold for his own reasons while trying to avoid fighting for the Spanish Civil War.

Inigo Garcias is wonderful as Jaime, the school's bully who later befriends Carlos as he reveals his talents for drawings that gives clues into what he knows about Santi. Garcias doesn't delve into the typical build or look of a bully but rather say foul language and such where he's kind of cool but also a bit intimidating. He gets the best development as he reveals his own fears for Jacinto. Fernando Tielve is amazing as Carlos, the newly-orphaned boy who discovers the dark secrets that goes in the orphanage. Tielve's performance doesn't fall into the category of most child performances which often, they have to act cute or make a stupid face. Tielve instead maintains an individuality where he tries to figure out what's going on while befriending both Jaime and Dr. Casares, whom he looks up to as a father-figure of sorts. It's Tielve's performance that carries the film.

Released in 2001, the film garnered lots of critical acclaim as it brought del Toro some attention as he was also helming Blade II just as El Espinazo del Diablo was coming out. Though the film wasn't a commercial hit, it would garner more attention after the release of El Laberinto del Fauno. Especially since critics and audiences would notice the parallels that del Toro put for both films where young actors Fernando Tielve and Inigo Garcias both made cameos in El Laberinto del Fauno. The object of the Devil's Backbone also made cameo appearances in the Hellboy movies that del Toro also directed.

El Espinazo del Diablo is a sensational horror-drama film from Guillermo del Toro and company. Thanks to the performances of its young actors Fernando Tielve and Inigo Garcias plus great support from veterans Federico Luppi, Marisa Paredes, and Eduardo Noriega. With help from Pedro Almodovar as a producer, the film is a fascinating take on the horror genre. Especially since it's relying on cheap gags and lots of gore. In the end, El Espinazo del Diablo is a chilling film from Guillermo del Toro.

After reading this, I'm gonna have to watch this film again. The first (and currently only) time I watched it, I don't think it had the impact on me i was expecting... that is to say, it had no impact on me at all.

The continual fuss about TDB (and Pan's Labyrinth as well) seems to have escaped me.... I must be operating on a different wavelength to del Toro...

Sometimes, there's a film where at first viewing. It becomes difficult to comprehend until some other person tells you that it's really good which will prompt to re-watch it.

There's nothing immediate about this film and it takes a while to get into but it does manage to pay off towards the end. Even in the way del Toro builds the suspense. He's very good at that.