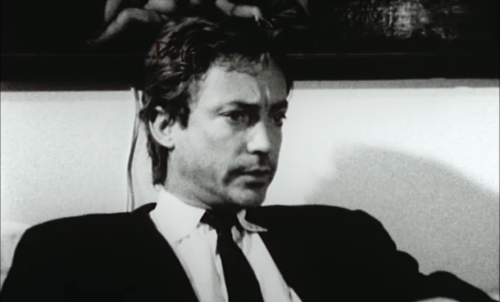 After the international breakthrough for his 1984, post-noir debut feature The Element of Crime, Lars von Trier had become a savior the Danish film scene while being the new enfant terrible for European cinema. For the young von Trier, The Element of Crime was the start of an ambitious trilogy chronicling the disintegration of Europe in its culture and society through post-apocalyptic surroundings. For von Trier's next feature, he attempted to make a horror feature with his Element co-writer Niels Vorsel which ended up being about a film within a film where everything goes all wrong entitled Epidemic.

Written by von Trier and Vorsel, Epidemic is a film about a director and his writer trying to conceive a horror film where an epidemic of a plague virus is spreading worldwide. Blurring the world of reality and fiction, von Trier aims for a strange take on that world by playing the director and a physician in another story who is unaware that he could be carrying the plague virus. Also starring Vorsel, Michael Simpson, Lief Magnusson, Ole Ernst, Olaf Ussing, and in his first of many appearance for von Trier films, German actor Udo Kier. Epidemic, shot in black-and-white 16mm and 35mm film, is one of von Trier’s most hypnotic and ominous film that breaks the conventions of thrillers.

A screenwriter (Niels Vorsel) and his director (Lars von Trier) talks to their producer Claes (Claes Kastholm) about a project called The Cop & the Whore but the actual script is lost due to a computer malfunction as neither know what it's about. Knowing that they can't a create a new script for this project, the two decide to work on a script a plague epidemic that threatens Europe. The two go on a road trip around Europe to research the plagues of Europe from the past as the director envisions the film in his head as plays a doctor going on a mission to stop the epidemic from spreading Europe.

The writer and director work on a storyline with help from the screenwriter's wife (Susanne Ottesen) who sets up a party with a wine expert (Jorgen Christian Krueff) once the two return from their trip. The director has more visions of the doctor going a helicopter ride as a nurse (Caecilia Holbek) watching him go on this journey. Arriving into Germany, the two meet their friend Udo (Udo Kier) who is grieving the death of his mother as he talks about his own life and the circumstances of his mother's death which inspires the two to write up a scene where the doctor meets a priest (Michael Simpson) as the plague worsens leaving the doctor's mission to be more important.

Returning from Germany to Denmark as the writer goes to the hospital for surgery as the director looks into autopsy ideas where things start to get surreal. When the writer reveals a dream he had that as his wife held the party for the producer as the writer brought in a hypnotist (Svend Ali Hamann) and his assistant (Gitte Lind) for entertainment. What would happen would blur the lines between reality and fiction leaving their little epidemic idea into something much bigger.

The idea of suspense, especially in a genre is a way to build momentum where everything has a climax from the beginning, middle, and end. In the way Lars von Trier approaches, he defies those conventions. The result of that does give the film nearly an anti-climatic feel where throughout the entire time, the film moves back in forth to the actual story of Epidemic and the two guys making it. In that unconventional, European style of filmmaking, it gives that presentation a very slow feel. Throughout the entire moment of the director/screenwriter story where both von Trier and Vorsel are basically playing exaggerated versions of themselves. That sequence is often filled with pretentious dialogue that really has nothing to do with anything. That sequence is very pretentious where throughout the entire time, it's shot in 16mm film where everything looks grainy and it seemed that nothing is going to come out of it.

Still throughout the first and second act, there are very interesting moments where in 35mm film, the fantasy sequence of the actual Epidemic is more interesting in what Vorsel and von Trier wanted to present where the film looks clearer and dreamier in black-and-white photography courtesy of cinematographer Henning Bendsten. Even in moments where the film reaches certain elements of despair, the genius of the presentation isn't just von Trier and Vorsel but notably Bendsten for his camera work and through von Trier's camera angles. Even in a scene where the priest is about to meet his fate in a water full of bodies.

Though through von Trier's presentation that works in its non-linear style that is complemented by the editing of von Trier and Thomas Krag, there's a point where by the third act. Nothing comes out of anything until something does happen there. When an audience will watch this for the first time and with 20 minutes left going on, the audience is expected to throw in the towel. Then, something unexpected happen where the result is pure von Trier. Just when you're about to pretty much ready to submit, he'll grab you unexpectedly right at your heart to watch what unfolds. After a second viewing of the film, the audience will seem to have an understanding of what is going on while seeing things that are overlooked. While this is a flawed film, the end result reveals in why Lars von Trier is one of the most interesting directors of all-time.

Helping out von Trier in visualizing the look of the film production designer Soren Gam who does amazing work in creating the desolate, bleak look of the film's fantasy sequences while the locations that were in Denmark and Germany are also wonderful. Gam is also responsible for the film's strange visual effects, especially since the film's title that appears after eight minutes of the film is shown throughout the entire movie in red. With Peter Englesson, editor Thomas Krag, and co-writer Niels Vorsel providing wonderful sound work for the film. The music of the film that appears in many of the fantasy sequence is done by composer Richard Wagner whose pieces help convey the world of fantasy while original music from Peter Bach in the realistic sequences convey the ominous tone of the two men working.

While von Trier has created a perfect cast, it seems clear that in the reality sequence, von Trier, Vorsel, Susanne Ottesen, Jorgen Christian Krueff, Udo Kier, and Claes Kastholm Hansen aren't really acting but do well in playing exaggerated versions of themselves. Lars von Trier though does show some great range in an often silent performance as the doctor who is suspected of carrying the disease in the fantasy sequence with his then-wife Caecilia Holbek playing the nurse. Michael Simpson does dual work in playing a cab driver in an early part of the film while playing the priest in the fantasy sequence. Lief Magnusson, Ole Ernst, and Olaf Ussing do wonderful work playing the superiors of the doctor who suspect him of carrying a disease. Svend Ali Hamann is excellent as the hypnotist while it's Gitte Lind who does great work in a terrifying performance as the woman who becomes hypnotized where her performances is one of the most earth-shattering performances of any of von Trier's films.

After years of being out of print on video and often unavailable for American TV except in clips of von Trier's work. Epidemic has finally arrived on DVD from Home Vision Entertainment. The Region 1 DVD is presented in a new digital transfer for a widescreen format of 1:66:1 ratio format with Danish and English language audio with optional English subtitles. The DVD features a statement from the 1987 press kit for the film where von Trier revealed on how he aimed for a smaller vision that was opposed to the extravagance of his previous film, The Element of Crime and straying away from traditional camera movements where throughout the film. Another statement that is from von Trier that is inside the sleeve is a second manifesto von Trier made in 1987. The statement reveals von Trier's plans for Epidemic as it also reveals von Trier's often pretentious state of mind as he proclaims "LONG LIVE THE BAGATELLE!" While the statements are interesting to read, it also shows the often absurd world of von Trier.

Aside from a director's filmography that spans all the way to The Five Obstructions documentary he made with mentor Jorgen Leth. Two special features appear on the DVD where the first is a full-length audio commentary track from von Trier and co-writer Niels Vorsel. The commentary from the two that was recorded in 2004 just for this DVD is enjoyable since the two feel relaxed and talk about a few of the film's technical pointers on how originally, a different film was supposed to be made for $9 million (in Danish dollars) but ended up making Epidemic for $1 million. The two also reminisce about the experience of making the film which they enjoyed doing and had a good time making as the commentary is a wonderful highlight in the special features.

The second special feature on the DVD is a 2000 53-minute TV documentary called FREEDOGME where a group of documentary filmmakers are doing a real-time interview via satellite with von Trier along with fellow Danish director Lone Scherfig, longtime von Trier associate Jean-Marc Barr, and German director Wim Wenders. With all for directors at their homes each holding handheld digital cameras (a fifth director in Harmony Korine was supposed to be in the broadcast but declined to do the doc) as they all have a discussion about cinema and Dogme 95, the movement von Trier co-founded with Thomas Vinterberg. The overall discussion about Dogme and cinema is fun since the directors are all holding cameras as they talk about the movement, its freedom despite the rules and Wenders love for it due to its technological advantages while von Trier does part of the interview rowing in his canoe. The overall doc is a joy to watch since all four directors give insight into the film and the future which they hope is optimistic, especially since there's more people going towards them.

When the film was released in 1987, the film wasn't as successful as The Element of Crime though it would reveal of what von Trier would do in the future. Many of the film's horror elements would become a precursor for his TV miniseries The Kingdom while many of minimalist techniques would come out into his later work. Still, the film does have its following, many of whom are fans of von Trier. While Epidemic may be the weakest of the three films in the Europa trilogy with The Element of Crime and Europa, it still shares its same themes of paranoia and bleak outlook on European society. In the end, fans of von Trier should look at this film as it stands as one of his most gripping films to date.

Lars von Trier Films: The Element of Crime - Medea - Europa - The Kingdom I - Breaking the Waves - The Kingdom II - Dogme #2-Idioterne - Dancer in the Dark - The Five Obstructions - Dogville - Manderlay - The Boss of It All - Antichrist - Melancholia - (Nymphomaniac) - The House That Jack Built