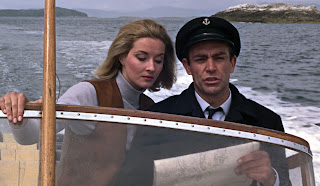 Based on the novel by Ian Fleming, From Russia with Love is about James Bond protecting a Soviet defector where they team up to retrieve an encryption device from SPECTRE as they’re also seeking to kill Bond. Directed by Terence Young and screenplay by Richard Maibaum (with additional contributions from Johanna Harwood), the film has James Bond becoming a target just as he also steps up his game to fight against the organization he discovered about in the previous film Dr. No as Sean Connery returns to play the role of Agent 007. Also starring Daniela Bianchi, Lotte Lenya, Pedro Armendariz, Robert Shaw, Desmond Llwelyn, Lois Maxwell, and Bernard Lee as M. From Russia with Love is a thrilling and exhilarating film from Terence Young.

Seeking revenge for what James Bond had done in Jamaica, SPECTRE hires former SMERSH colonel Rosa Klebb (Lotte Lenya) and Czechoslovakian chess master Kronsteen (Vladek Sheybal) to create a plan to steal a Soviet cryptographic device to intensify the Cold War. Klebb brings in assassin Red Grant (Robert Shaw) to aid in the plan while she also has a beautiful Soviet embassy clerk from Istanbul in Tatiana Romanova (Daniel Bianchi) as a pawn to seduce Bond as Romanov is unaware of her role. Learning about Romanova wanting to defect with the cryptographic device, M sends Bond to Istanbul to meet her as he meets his contact in Turkish station head Ali Kerim Bey (Pedro Armendariz).

Bey reveals a long-standing tension between the Soviet and the Turks where the Bulgarians are involved to help the Soviet as they spy on the Soviet consulate where Bond gets a look at Romanova. Bond and Bey also learn that ruthless Bulgarian assassin Krilencu (Fred Haggerty) is involved as he would later attack Bond and Bey at rural gypsy settlement where Bond is unaware that Grant is there to keep him alive. After aiding Bey in ridding Krilencu, Bond finally meets Romanova where the two are unaware of SPECTRE’s involvement. After a rendezvous that Romanova was supposed to meet where Bond realizes something isn’t right as he got the floor plan to steal the cryptographic device.

After succeeding in getting the device with Romanova and Bey, the trio board a train where they stop a Russian agent as things seemed to go well as planned. Unfortunately, something happens as Bond realizes that something strange is happening as Grant boards the train pretending to be Bond’s contact. Eventually, Bond and Romanova realize what is really going on forcing Bond to do something to stop SPECTRE and their plans.

The film is essentially the story of James Bond trying to aid a Russian defector in bringing in a device that could help them in the Cold War only to be unaware in their role as pawns in a game by an organization that is trying to heat up the Cold War and target James Bond. The film is partially a revenge tale from the point of view of SPECTRE and their secretive leader in a man that is known as Number 1. Yet, it’s also an adventure film from Bond’s perspective as he’s trying to do his mission for the British while having his time to kick some ass and score with women all at the same time. Richard Maimbaum’s screenplay does play to the formula of how Bond conducts his adventures but it does take its time to play with it. Notably the opening scene to reveal Grant’s professionalism as an assassin as well as the next scene where SPECTRE plan their next move following the events of Dr. No.

One of the key differences in Maimbaum’s script is how Bond is willing to play the role of a pawn so he can figure out what is going on. While Romanova may not be aware of what she’s doing as she’s just a clerk that is willing to defect. She isn’t some damsel-in-distress as she is quite an interesting woman who is playing a part for Klebb but is unaware of the role she’s really playing. When her relationship with Bond starts to grow, she becomes more concerned of a life outside the Soviet Union and away from conflict only to be aware of the stakes that is happening around her and the cryptographic device she’s to hand over to the British.

Then there’s the villains as their motivation are very clear from the beginning as they are definitely aiming for revenge and power. Having Bond be the pawn of what they want and then kill him add to the element of suspense the story needed as they’re trying to pit Soviets/Bulgarians against Turkish agents just so they can get Bond to play with the Turks so he can steal the device and eventually get it from with the help of a very intelligent and powerful assassin who doesn’t say a word until the third act. Of course, the villains would practically underestimate Bond who isn’t some typical secret agent who has a lot love for the ladies and is willing to play the fool.

Terence Young’s direction is amazing for the way he plays out the suspense such as the opening prologue scene before the opening credits to display Grant’s skills as an assassin. With a lot of gorgeous compositions of the location in Istanbul with some amazing set pieces such as Bey’s home office and Soviet embassy. Young’s direction is always thrilling while he takes his time to let the action sequences play out where it does create a moment of excitement such as the battle scene in the gypsy settlement.

Since the film is an action-adventure spy thriller, Young is also aware that the story is balanced by Bond playing a sleuth to discover what is going on while being part of an element of suspense. One key scene that is a mastery in the air of suspense is where Bond finally meets Grant for who he really is as it’s a great scene of how to build up the suspense. It’s all about the battle of wits and Bond killing time so he can make his move. It’s a scene that is presented wit such simplicity and patience where it sets off a great payoff that would lead to more adventures for Bond as he faces SPECTRE. Overall, Young creates a truly spectacular and fun film that creates a standard of what James Bond film should be.

Cinematographer Ted Moore does excellent work with the film‘s very colorful cinematography to play up the beautiful locations of the Istanbul exteriors along with some amazing lighting set-ups for the scenes inside the church. Editor Peter R. Hunt does amazing work for the film‘s stylized editing that is filled with rhythmic cuts for the film‘s action sequences along with a transition wipe and other stylized cuts to help maintain a leisured rhythm. Production designer Syd Cain does brilliant work with the set pieces created such as the home base where Bond is briefed to the interior places in Istanbul and the Orient Express train.

Costume designer Jocelyn Rickards does nice work with the costumes such as dresses that Romanova wears to complement her sensual style and beauty. Sound recorders C. Le Mesurier and John W. Mitchell do terrific work with the sound such as the intimacy of the church along with the raucous atmosphere of the gypsy settlement. The film’s music by John Barry is incredible for the way it plays up to the suspense and drama while creating various uses to Monty Brown’s famed theme to help keep the flow going. The title song sung by Matt Monro is a truly exquisite ballad that plays in the film’s final credits to emphasize Bond’s love for Romanova.

The casting by Weston Drury Jr. is superb for the ensemble that is created as it features some memorable small roles from Eunice Gayson reprising her role as Bond’s semi-girlfriend Sylvia Trench, Fred Haggerty as Bulgarian assassin Krilencu, Aliza Gur and Martine Beswick as a couple of gypsy women who fight each other only to be a couple of women Bond sleeps with, Vladek Sheybal as the Czech chess grandmaster Kronsteen who tries to organize a fail-safe plan to get rid of Bond, and in the mysterious role of Number 1 aka Ernst Stavro Blofield, the voice of Eric Pohlmann and the body of Anthony Dawson who previously played Dr. No in the preceding film. Other notable roles of people who would be Bond regulars include Walter Gotell in an early appearance to the franchise as a SPECTRE henchman, Lois Maxwell as the flirtatious secretary Miss Moneypenny, and Desmond Llewlyn in his debut appearance as Bond’s gadgets man Q.

In his final film role, Pedro Armendariz is excellent as the helpful and witty Ali Kermin Bey who aids Bond in the mission while grounding him on what he should do. Bernard Lee is terrific as Bond’s superior M who briefs Bond on what he should do while being frustrated with Bond’s other activities. Lotte Lenya is great as the cunning villainous Colonel Rosa Klebb who wants to ensure Bond’s end while Robert Shaw is fantastic as the eerie yet very low-key killer Red Grant as there’s a cool silence about Shaw’s performance in the first two acts only to be even cooler when he speaks. Daniela Bianchi is wonderful as Tatiana Romanova who unknowingly becomes a pawn in SPECTRE’s schemes as she finds an ally in Bond where she aids him in her role as a defector as it’s a part that has charm and wit though Bianchi’s voice is dubbed by Barbara Jefford.

Finally, there’s Sean Connery as Agent 007 James Bond where Connery definitely shows more of his skills as a badass to play Bond while exuding the same kind of charm and professionalism that the role required. Connery also maintains Bond’s low-key sense of humor while the scene he has with Shaw shows Connery just playing it cool and not putting pressure on himself as he maintains that kind of masterful way to restrain himself as what Bond needed. It’s definitely Connery who just ups the ante in his role as 007.

From Russia with Love is a fantastic and entertaining film from Terence Young that features Sean Connery in an incredible performance as James Bond. The film is definitely among one of the great films of the James Bond film series thanks in part to the way it plays out its suspense and featuring great supporting characters who are quite complex in the way they interact with Bond. In the end, From Russia with Love is a phenomenal action-adventure film from Terence Young.

James Bond Files: The EON Films: Dr. No - Goldfinger - Thunderball - You Only Live Twice - On Her Majesty’s Secret Service - Diamonds Are Forever - Live & Let Die - The Man with the Golden Gun - The Spy Who Loved Me - Moonraker - For Your Eyes Only - Octopussy - A View to a Kill - The Living Daylights- Licence to Kill - GoldenEye - Tomorrow Never Dies - The World is Not Enough - Die Another Day - Casino Royale (2006 film) - Quantum of Solace - Skyfall - SPECTRE

I'm not entirely sure why, but this has always been my favorite Bond film. Or at least in my Top 3. Connery, in my opinion, was never better.

Right now as I'm doing to the marathon. This is so far, the best Bond film though there's a lot of them from the Roger Moore to Daniel Craig era that I'm going to be re-watching.

I think it is the stakes and how the script was able to give Bond equals to face. Plus, if you were to place the film by itself. It's really a great action-adventure film without needing to see the other Bonds.

That scene with Robert Shaw is just fucking perfect.