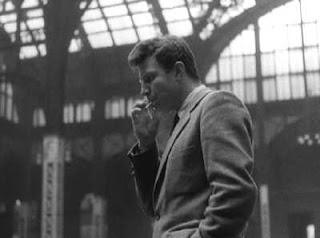 Directed by Stanley Kubrick and written by Kubrick and Morris Bousel, Killer’s Kiss is a noir film about a prizefighter who finds himself the target of a gangster after saving a woman. The film is Kubrick’s second feature-length film as it explores a man whose good deed finds him in deep trouble. Starring Jamie Smith, Irene Kane, and Frank Silvera. Killer’s Kiss is an interesting film from Stanley Kubrick.

Davey Gordon (Jamie Smith) is a welterweight fighter who is reaching at the end of his ropes as he is fascinated by a beautiful woman living across from his window at his apartment. On his way to his fight, the woman named Gloria Price (Irene Kane) is a dancer who works at dancehalls as she is picked up by her boss Vincent Rapallo (Frank Silvera) on her way to work. The two later watch Davey’s fight on TV as Gloria feels uncomfortable about Rapallo trying to seduce her. After losing his fight, Davey returns to his apartment as he gets a call from his uncle as he watches Gloria where he later hears her scream as she is harassed by Vincent who leaves the scene. After hearing about what happened to her as she recalls a story about her older sister that led to her becoming a taxi dancer. Davey decides to create a plan for the two to run away together.

At first things seem to be on its way with help from Davey’s manager Albert (Jerry Jarrett) but things eventually go wrong forcing Davey to have a confrontation between Vincent and his goons.

The film is about a fighter who gets himself into trouble with a gangster over a woman leading to some huge confrontations as he recalls everything he went through. A lot of it is told in a reflective narrative as the film begins at the ending where Davey Gordon is waiting a train station wondering how did he get into all of this trouble. It’s a narrative that is interesting as it features stories about a man who is at the twilight of his fighting career while he falls for this taxi dancer who feels smothered by this violent gangster who wants to control her. It’s a premise that isn’t compelling since it plays to the schematics of what is expected in a film noir where it would feature climatic fights and such towards the end of the film.

Stanley Kubrick’s direction is truly engaging for the way he creates amazing imagery through his camera as he also serves as cinematographer and editor. Shot on location in his native New York City, the look of the film is truly gorgeous as it would bear many of the hallmarks of Kubrick’s style in terms of lighting set-ups and eerie close-ups. Notably as it features some amazing scenes such as Gloria’s story about her ballerina sister in an amazing ballet sequence as well as Davey’s boxing match and the climatic moment between Davey and Vincent. Through some swift, effective editing and amazing compositions, Kubrick keeps the film engaging and thrilling despite the story’s shortcomings that includes a very conventional ending that is so un-Kubrickian. Overall, Kubrick creates a pretty solid film that manages to play off the conventions of the genre.

Sound recorders Walter Ruckersberg and Clifford van Praag do nice work with the sound to capture the atmosphere of the boxing match as well as some of the more tense moments in the film‘s climatic fight between Davey and Vincent. The film’s music by Gerald Fried is excellent for its orchestral score to play up to some of the film’s suspense and drama along with dancehall music for the dancehall scenes including a composition by Norman Gimbel and Arden E. Clar for the film’s love theme.

The film’s cast is terrific for the ensemble that is created as it features some memorable appearances from Jerry Jarrett as Davey’s manager Albert, Ruth Sobotka as Gloria’s ballerina sister Iris, and the duo of Mike Dana and Felice Orlandi as a couple of Vincent’s goons. Frank Silvera is pretty good as the villainous Vincent who is a typical noir villain as he does make a fantastic impression of a man obsessed with this beautiful woman. Irene Kane is wonderful as the very beautiful Gloria who serves as the femme fatale who hopes to escape the clutches of Frank and find safety in Davey. Finally there’s Jamie Smith in a superb performance as the world weary Davey Gordon who tries to figure out what to do with his life while finding himself in danger over a woman.

Killer’s Kiss is a very good film from Stanley Kubrick. While it’s a film that isn’t so great due to conventional plot schematics and little character development. It’s still a film that people who are interested in Kubrick’s work should seek out. Even as it bears a lot of the visual tricks and compositions that he would refine in the years to come. In the end, Killer’s Kiss is an intriguing yet engaging film from Stanley Kubrick.

Nice Review. I agree with your thoughts about the ending being unKubrickian, and I wonder if that has anything to do with the ratings back then, or he just didn't have complete control in those early days too.

Kubrick used to be a Noir boy,haha.I think this is his show-off picture,to show how great he is as a cinematographer.

@TheVern-I think it was more to do with studio interference since Kubrick was just a young filmmaker at the time and like anyone filmmaker on the way up, they don't have final cut.

@David-There's definitely prime visual examples of what he would do in the years to come. I think that's why people are often interested in seeing this.