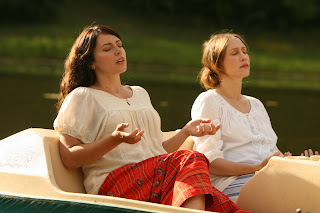 Based on Carolyn Briggs’ memoir This Dark World: A Story of Faith Found and Lost, Higher Ground is the story of a woman whose life goes through various changes when she becomes religious at 18 only to question her beliefs as a married adult. Directed and starring Vera Farmiga with a screenplay by Carolyn Briggs and Tim Metcalfe, the film explores the world of faith and doubt in the eyes of a woman in the course of her life. Also starring John Hawkes, Taissa Farmiga, Donna Murphy, Dagmara Dominczyk, Joshua Leonard, and Bill Irwin. Higher Ground is a compelling drama from Vera Farmiga.

Following a period where her mother Kathleen (Donna Murphy) had a miscarriage that would ruin the marriage between her mother and father CW (John Hawkes), a young girl named Corinne (McKenzie Turner) is dealing with a troubled aftermath as she attends church with her young sister Wendy (Taylor Schwenke). At the church, Pastor Bud (Bill Irwin) has a sermon where Corinne accepts Jesus into her heart where she watches her parents’ marriage disintegrate. Years later as an 18-year old (Taissa Farmiga), Corinne meets a young rock singer named Ethan (Boyd Holbrook) where they have a relationship that would lead to Corinne getting married and having a baby. The marriage nearly crumbles following an accident when Ethan’s band goes on the road where he and Corinne decide to give their life towards God.

Time has passed as Corinne (Vera Farmiga) is now an adult with two kids another on the way while she and Ethan (Joshua Leonard) are part of a community of followers that includes Corinne’s friend Annika (Dagmara Dominczyk). A visit from Wendy (Nina Arianda) starts off well until Wendy’s lifestyle starts to get to Ethan while Corinne becomes fascinated by Wendy’s views on God and faith. Though Corinne loves the community, she starts to feel slighted by its restrictions over what to wear and such where it starts to overwhelm her after getting her third child. When Annika starts to feel ill leaving Corinne worried, the result would have an impact on Corinne’s views as it would lead to her marriage to finally unravel. Notably as she starts to have doubts about the way God works leading to Corinne to wonder if she had taken the right path to righteousness.

The film is about a life of a woman spanning through four different decades of her life where she encounters the world of Jesus Christ and faith only to find herself questioning about God’s will. It’s a compelling story that is about faith and doubt in the eyes of a woman who starts off going through tragedy only to find solace in God but later becomes doubtful following the restrictions of her community and various incidents that would impact her doubts. Carolyn Briggs and Tim Metcalfe’s screenplay does an excellent job in exploring Corinne’s life in the world of God and such. When it comes to the film’s third act, it gets a bit drawn out because the story starts to drag a bit as Corinne starts to break away from her old life to try and find something new. There’s nothing bad about it but it just takes a lot of out of what the first 2 acts had done in terms of dramatic execution.

Vera Farmiga’s direction is quite engaging and stylish for the way she opened the film with a baptism and then cuts to the narrative to follow this woman’s life. Shot on location in upstate New York, the film has gorgeous images of the fields and cliffs to play out the world that Corrine and her community live in. Farmiga also knows how to set up dramatic moments with her framing and having the actors be placed to create dramatic tension. A lot of it is very interesting despite the flaws in the third act where it loses a bit of steam. While the film is a dramatic take on a woman’s life, Farmiga isn’t afraid to put in some humor including a strange fantasy scene to play out what Corinne might be feeling. Overall, Farmiga does a solid job in creating an insightful film about a woman’s exploration towards faith.

Cinematographer Michael McDonough does excellent work with the film‘s photography from the lush look of the interiors for the scenes in the 60s and 70s to a more naturalistic look for the scenes in the 80s and 90s with some gorgeous exterior shots of the locations. Editor Colleen Sharp does nice work with the editing to create something that is straightforward without a lot of style while maintaining a leisured pace for the film. Production designer Sharon Lomofsky, with art directors Shawn Carroll and Lisa Meyers and set decorator Diana Bregman, does fantastic work with the set pieces such as the homes that Corinne lives in to the churches that she attends.

Costume designer Amela Baksic does wonderful work with the clothes that Corrine wears to explore her evolution and personality through the dresses she wears in the 70s and 80s to a more casual look in the 90s. Sound editor Robert Hein does terrific work with the sound from the intimacy of the churches to the way music is performed in a lot of those scenes. The film’s score by Alec Puro is superb for its folk-driven sound while its soundtrack that is assembled by music supervisor Levon Broussalian features a lot of folk-based religious music.

The casting by Kerry Barden and Paul Schnee is incredible for the ensemble that is created as it includes some notable small roles from Ebon-Moss Bachrach as community member Luke, Norbert Leo Butz as community leader Pastor Bill, Barbara Tuttle as Bill’s wife, Sean Mahon as the Irish mail carrier that Corinne befriends late in the film, Jack Gilpin as a therapist Corinne meets, Michael Chernus as Annika’s husband Ned, and Bill Irwin as the inspiring Pastor Bud. In the roles of Corrine and Ethan’s children, there’s Flynn Hawkey, Luella Roche, and Sarah Little as the eldest daughter Abigail, Sarah Banks and Zoe Allegra as Lily, and Matthew Biltonen as the young child Gabe.

Boyd Holbrook is excellent as the young Ethan with his energetic performance while Kaitlyn Rae King is very good as the teenage Wendy with Taylor Schwenke who is also good as the younger Wendy. McKenzie Turner is wonderful as the young Corinne while Taissa Farmiga is amazing as the teenage Corinne who feels lost in her world as she falls for the young Ethan. Donna Murphy is brilliant as Corinne’s outgoing mother Kathleen while John Hawkes is terrific as Corinne’s troubled yet laconic father CW as the two have a great moment in a scene in the third act. Nina Arianda is superb as Corinne’s troubled sister Wendy who tries to figure out her sister’s world while admitting she is troubled. Dagmara Dominczyk is great as Corinne’s best friend Annika whose view on faith would shape Corinne’s view later on.

Joshua Leonard is fantastic as Corinne’s husband Ethan who tries to maintain his musical side while becoming confused by his wife’s behavior as he tries to hold on to his faith. Finally, there’s Vera Farmiga as Corinne where Farmiga’s performance is entrancing in the way she tries to deal with God and religion only to become confused by her world and its restrictions as it’s one of Farmiga’s essential performances.

Higher Ground is a stellar and fascinating film from Vera Farmiga as it features a terrific ensemble cast that includes Joshua Leonard, Dagmara Dominiczyk, Taissa Farmiga, Donna Murphy, and John Hawkes. For audiences that is interested in the world of religious communities and faith will definitely find the film intriguing despite the flaws it carries in its third act. In the end, Higher Ground is a film worth seeing from its star and director Vera Farmiga.

My sister is a devout christian while I on the other hand am not. Does this movie mock her beliefes. I thought about showing her this but I don't want to make fun of her faith.

It doesn't really make fun of anything but it does show the fallacy of religion when it goes over the top.

I would more suggest Monty Python's The Life of Brian which I think is the best commentary on the fallacy of religion.

Great review! I really have to see this movie, I love films dealing with religious aspects and Vera is one of my favorite people doing movie right now. Taissa is also amazing, I can't wait to see them both in one movie so I'll probably see this one soon.

@Sati-Thank you. I like films about religion when it's done right. I'm also eager to see Taissa Farmiga since she's about to appear in Sofia Coppola's upcoming film The Bling Ring with Emma Watson where I think it'll come out next year.