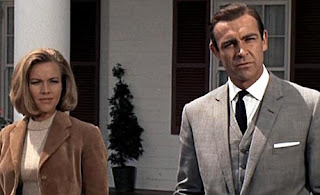 Based on Ian Fleming’s novel, Goldfinger is the story of James Bond tackling a gold magnate who plans to attack Fort Knox while smuggling gold. Directed by Guy Hamilton and adapted screenplay by Richard Maimbaum and Paul Dehn, the film has Bond taking on a new foe who is hell-bent on taking over the world on his own terms where he would do dastardly deeds. With Sean Connery playing the role of Agent 007 James Bond. The film also stars Gert Frobe, Honor Blackman, Shirley Eaton, Harold Sakata, Lois Maxwell, Desmond Llewelyn, Tania Mallet, and Bernard Lee as M. Goldfinger is a stylish yet truly suspenseful film from Guy Hamilton.

On holiday in Miami after an assignment, Bond meets CIA agent Felix Leiter (Cec Linder) who asks Bond to watch over a bullion dealer named Auric Goldfinger (Gert Frobe) who is suspected of smuggling gold. Bond seduces Goldfinger’s assistant Jill Masterson (Shirley Eaton) to help Goldfinger lose a game of gin where things eventually go bad when Bond finds Jill dead and covered in gold. After some briefing from M about what to do with Goldfinger, Bond travels to Switzerland to meet Goldfinger to see what he’s doing as the two play golf where Bond meets Goldfinger’s mute henchman Oddjob (Harold Sakata). While scoping out Goldfinger and his hideout, Bond meets a woman named Tally (Tania Mallet) who he sees is carrying a gun where he later learns about her identity.

After looking into his hideout to see what Goldfinger is planning, Bond is eventually captured where Bond nearly dies from a laser as he manages to lie his way to win Goldfinger over. Goldfinger decides to accompany Bond to Baltimore where Bond is on a plane flown by Goldfinger’s personal pilot Pussy Galore (Honor Blackman). At Goldfinger’s ranch, Bond is imprisoned but later escapes to learn what Goldfinger’s plans are which is to rob Fort Knox $15 billion in gold and split the money with several mob factions. Bond is later caught as he learns what Goldfinger really wants to do as Bond is forced to watch. Yet, Bond would create moves to find ways for Goldfinger’s plans to be foiled with some surprising help.

The film is the story of how James Bond meets a gold-obsessed bullion smuggler who plans to do something dastardly forcing Bond to save the world as usual and score with the ladies along the way. It’s a plot that is typical of many Bond films to follow but what makes this film so different from everything else is that Bond finally has a foe that is very powerful. Auric Goldfinger may not be a huge physical force that Bond would have to face but he is however a very cunning man whose motivation is clearly about gold and to profit from it anyway he can. Yet, Goldfinger will do things through his people that are truly disturbing forcing Bond to charm his way into Goldfinger and even outsmart him.

The screenplay that Richard Maimbaum and Paul Dehn create does a lot more in playing with the Bond formula where more good people get killed while the stakes are raised even higher. Especially for someone as professional as Bond where he would face ideas that would challenge his professionalism as it makes him more flawed. Then there’s the character of Pussy Galore who is this very talented and fearless woman who is part of Goldfinger’s gang as she heads a group of flying women who will aid in Goldfinger’s plans. Of course, Bond would find his way to charm her as it would add to a huge plot point for the film. The screenplay also would find ways for Bond to use his wit through some stylish dialogue. Even in the way he interacts with allies such as Miss Moneypenny and Q, the latter of which would start this sort of love-hate relationship over the way Bond uses Q’s equipment.

Guy Hamilton’s direction is extraordinary for the way he opens the film with a prologue to establish Bond’s sense of professionalism where he gets the job done and score with the ladies. It would then move to this main narrative where Bond is relaxed and on holiday but is interrupted where he has to be on the job and deal with Goldfinger from afar. Through the beautiful locations in Switzerland and Miami as well as other settings from Pinewood Studios in England. Hamilton’s direction is broad for the depth of field he creates in these locations while maintain an air of suspense for quieter scenes such as Bond scoping out Goldfinger’s factory.

The direction also has a way to maintain the suspense such as the scene of Bond lying on a table as a laser is getting close to him. The way Hamilton sets up the camera for the laser pointing at the table to cut with Bond’s reaction where the idea of him dying seems very evident. It’s among the many brilliant moments in the film that culminates with this amazing scene where Goldfinger goes to Fort Knox to unveil his big plan only for something to go wrong. There’s also a bit of humor that plays where Hamilton knows how to gel humor with suspense as it fits in very naturally. The overall work is truly phenomenal as Hamilton crafts a very entertaining and engrossing spy thriller that just ups the ante of what a James Bond film should be.

Cinematographer Ted Moore does superb work with the film‘s colorful Technicolor cinematography to capture the beautiful exteriors of Miami and Switzerland as well as the interiors to help set a mood for what Bond is facing. Editor Peter R. Hunt does brilliant work with the editing to create some stylish cuts to play with the film‘s suspense as well to some of the film‘s humor. Production designer Ken Adam and art director Peter Murton do amazing work with the set pieces such as Goldfinger’s huge lab to the meeting room with his huge models to display his plans.

Sound recorders Gordon K. McCallum, Dudley Messenger, and Otto Snell do terrific work with the sound to capture the humming of the planes as well as the sound of gunfire in the film‘s climatic battle scene. The film’s score by John Barry is incredible for its jazz-driven score with lush orchestral arrangements to play up the sense of drama, adventure, and suspense as it is definitely Barry coming into his own as a composer and creating a music score that stands out on its own. The title song by Barry, Anthony Newley and Leslie Bricusse that is sung by Shirley Bassey is among one of the best songs of the James Bond catalog thanks to her vocal delivery and the snazzy brass section that backs her up.

The film’s ensemble cast is definitely outstanding for the people chosen as it includes some memorable small roles from Burt Kwouk as Goldfinger’s scientist Mr. Ling, Michael Mellinger as Goldfinger’s secondary henchman Kisch, Austin Willis as Goldfinger’s gin rummy opponent in Miami, Margaret Nolan as the woman Bond is with in Miami, Richard Vernon as English bank official who shares Bond information about gold, and Martin Benson as a gangster who is suspicious about Goldfinger’s plans. Other noteworthy small roles include Cec Linder as Bond’s CIA friend Felix Leiter, Lois Maxwell as M’s secretary Miss Moneypenny who always have a witty remark towards Bond, and Desmond Llewelyn as the gadgets inventor Q where he gets a chance to shine in his own funny remarks towards Bond’s treatment of his work.

Tania Mallet is very good as the mysterious woman Tally whom Bond meets in Switzerland while Shirley Eaton is terrific in a very memorable performance as the ill-fated Jill Masterson. Bernard Lee is great as Bond’s superior M where Lee gets more to do in not just briefing Bond but also lecture him about his conduct over what happened in Miami. Harold Sakata is excellent as Goldfinger’s silent henchman Oddjob where he makes a truly memorable impression as a man whose weapon is his physical strength and a deadly hat. Gert Frobe is brilliant as Goldfinger where Frobe displays a sense of intelligence and charisma to a man who is truly despicable but also likeable in some weird way. Honor Blackman is wonderful as Goldfinger’s pilot who can definitely go toe-to-toe with Bond while proving to be someone who is willing to put up with Bond’s charming ways.

Finally, there’s Sean Connery in his third outing as Agent 007 James Bond. Connery shows more humility in his role as Bond by making him more engaging as a man who can mistake but is also willing to rectify it anyway he can. Even if he’s under pressure or willing to talk his way through to get out of a situation. It’s the embodiment of what James Bond should be as Connery definitely delivers in what is probably his best portrayal as Bond.

Goldfinger is a magnificent film from Guy Hamilton that features a glorious performance from Sean Connery as James Bond. The film is definitely among one of the great Bond films thanks to a great villain played by Gert Frobe, sexy Bond girls, cool gadgets, and suspense that manages to be engaging. It’s also a film where it takes its time to uncover the sinister plot while finding ways to create action sequences that is worth watching. In the end, Goldfinger is a phenomenal James Bond film from Guy Hamilton.

James Bond Files: The EON Films: Dr. No - From Russia with Love - Thunderball - You Only Live Twice - On Her Majesty’s Secret Service - Diamonds Are Forever - Live & Let Die - The Man with the Golden Gun - The Spy Who Loved Me - Moonraker - For Your Eyes Only - Octopussy - A View to a Kill - The Living Daylights - Licence to Kill - GoldenEye - Tomorrow Never Dies - The World is Not Enough - Die Another Day - Casino Royale (2006 film) - Quantum of Solace - Skyfall - SPECTRE - No Time to Die

Even though I like From Russia With Love slightly more, I agree that this is Connery's best outing as Bond. Man, your posts make me want to go back and rewatch these. Love them! (Your posts and the movies...)

I also agree with you that From Russia with Love is the better film but Connery's performance in this film is his best so far. I have 4 more films of his (if you also count Never Say Never Again) to see as I have 3 more for this month.