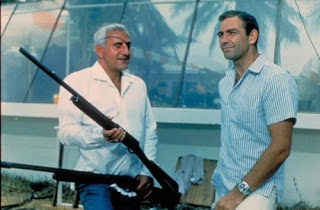 Based on Ian Fleming’s story that was written with Kevin McClory and Jack Whittingham, Thunderball is the story of James Bond trying to stop SPECTRE from destroying two major cities with nuclear missiles as he faces off against SPECTRE’s second-in-command. Directed by Terence Young and screenplay by Richard Maimbaum and John Hopkins, the film has James Bond taking on more expansive locations including underwater along with an increased use of gadgets as Sean Connery plays Agent 007 in the fourth of his seven appearance as Bond. Also starring Claudine Auger, Adolfo Celi, Luciana Paluzzi, Rik Van Nutter, Desmond Llewelyn, Lois Maxwell, and Bernard Lee as M. Thunderball is a thrilling and stylish film from Terence Young.

After the death of an associate, SPECTRE plans to steal bombs from NATO to threaten the world as heading the operation is its second-in-command in Emilio Largo (Adolfo Celi). With the help of his associate Count Lippe (Guy Doleman) to organize the plan, Lippe goes to a health spa where James Bond is attending to recover from a recent mission where he notices Lippe’s tattoo as well as a man whose face is covered in bandages. After a failed attempt on Bond’s life, Bond later finds a dead man named Francois Deveral (Paul Stassino) who had been killed by the mysterious man pretending to be him to steal two nuclear bombs from a plane. The mission is a success as Largo eventually takes care of a few loose ends with help from his associates.

After a briefing from M on what to do, Bond notices the picture of Deveral with a woman who is revealed to be his sister Domino (Claudine Auger) as Bond travels to Nassau to find her thinking she’s connected to Largo. Arriving at Nassau with his assistant Paula (Martine Beswick), Bond finds Domino as he learns she’s Largo’s mistress as he later meets Largo in a game of cards. Needing to find the bombs, Bond’s CIA friend Felix Leiter (Rik Van Nutter) aids him with some gadgetry assistance from Q (Desmond Llewelyn). While Bond goes on the search for the missing bombs, he meets up with a mysterious woman named Fiona Volpe (Luciana Paluzzi) whom Bond notices is an associate of Largo.

After what was supposed to be a night with Domino and Largo, Bond learns something goes wrong as he’s eventually captured by Volpe and Largo’s men only to escape once again. A breakthrough is eventually made when Bond and Leiter find the plane but realizes the bombs are missing as Bond decides to make an unexpected move. The move would have Bond realize what Largo is up to as it’s up to him to stop Largo from destroying the world.

The film is another James Bond story in which he faces off against another member of SPECTRE where he tries to stop another dastardly plan to destroy the world. Yet, what makes this film different from its predecessors is that Bond is facing a new foe whose ambition is to take nuclear weapons to destroy the world unless he can get 100 million pounds in white uncut diamonds. That’s pretty much as the plot is simple to tell although the screenplay is much more drawn out as it features more scenes of how Largo’s heist is planned and executed as well as new foes who prove to be great challenges to Bond.

Emilio Largo may not have the ambition or intelligence of Goldfinger nor the physicality and killing skill of Red Grant. Yet, he is interesting because he is someone who can create grand schemes and lead the way as there is a reason why he’s SPECTRE’s second-in-command. He’s a man that keeps the job simple though he knows he has to find some way to outwit Bond. He would find that in Fiona Volpe who is aware of Bond’s seductive attributes as she goes head on to be seduced but knows that it’s also Bond’s flaw for always going after women. What happens would present great challenges to Bond as he remains the same but also more sensitive in how he handles things including having to tell Domino about what really happened to her brother.

Terence Young’s direction is much broader than in previous films due to big action sequences set underwater as well as a thrilling prologue where Bond kills a SPECTRE agent in grand style. It would set up this meeting with an amazing set piece where the mysterious Blofield (Anthony Dawson with Eric Pohlmann’s voice) is there looking at all of his people as they would plot the next big move. Young’s direction does succeed in creating a lot of suspense and building it up where it would include some amazing action sequences.

However, there are a few flaws in the direction where part of the film does take place underwater. Even though the scenes are beautiful and do establish key moments for the story to set up the plot. They go on for a little too long where it would drag the film a bit despite some of the exciting action sequences that do happen. With some beautiful locations shot around Nassau and Paris plus set pieces set in Pinewood Studios, Young’s direction is truly extraordinary to get the James Bond story into bigger places and bigger moments where the results do live up to the grandeur as Young does an excellent job.

Cinematographer Ted Moore does superb work with the film‘s cinematography from the gorgeous look of the underwater sequences to the beautiful sunny locations of Nassau in the day time exterior scenes. Editor Peter R. Hunt does amazing work with the editing in creating stylish jump-cuts for some of the film‘s action sequences including transitional wipes to keep the film moving. Production designer Ken Adam, with set decorator Peter Lamont and art director Peter Murton does incredible work with the set pieces such as SPECTRE‘s Paris meeting room, Bond‘s Nassau hotel room, and the home of Largo.

Special effects supervisor John Stears does nice work with some of then-primitive visual effects created such as Bond escaping a rocket in the film‘s prologue as well as other gadget-related stunts. Sound recorders Maurice Askew and Bert Ross do terrific work with the sound from the location setting such as the carnival scene where Bond tries to escape Volpe and her men along with some moments in the film‘s underwater sequences. The film’s score by John Barry is brilliant for its bombastic score filled with soaring orchestral arrangements to play up the suspense and action as well as a mixture of Caribbean-based music for the scenes in Nassau. The title song written by Barry and lyricist Don Black is a wonderful song that plays up to the grandeur of the film as it’s sung by Tom Jones.

The film’s cast is outstanding for the ensemble that is assembled as it includes some memorable small roles from Bill Cummings and Michael Brennan as a couple of Largo’s henchmen, George Pravda as Largos’ physicist Kutze, Earl Cameron as Leiter’s assistant Pinder, Molly Peters as Bond’s health spa therapist, Martine Beswick as Bond’s Nassau assistant Paula, Philip Locke as Largo’s top henchman Vargas, Paul Stassino in a dual role as Domino’s brother Francois and the double who pretends to be Francois for SPECTRE in the plane raid, and Guy Doleman as the agent Count Lippe who tries to kill Bond at the spa. Lois Maxwell is wonderful as M’s secretary Miss Moneypenny as she gets more things to do with Bond and M while Desmond Llewelyn is superb as the witty inventor Q.

Rik Van Nutter is excellent as Bond’s CIA associate Felix Leiter who aids in the search of the missing plane while Bernard Lee is very good in his small role as Bond’s superior M. Luciana Paluzzi is great as Largo’s associate Fiona Volpe who tries to outwit Bond with her sensuality and arms skill as she proves to a formidable opponent. Claudine Auger is wonderful as Largo’s mistress Domino who is charmed by Bond while becoming aware that something isn’t right about Largo in relation to her brother’s disappearance. Adolfo Celi is great as the ambitious Emilio Largo who is trying to organize a great scheme while dealing with Bond as he tries to find his way to outwit Bond.

Finally there’s Sean Connery in the role of Agent 007 James Bond where Connery definitely seems more comfortable in playing the role as he exudes the same kind of charm and professionalism the character needed. There’s also a new sensitivity to the way Bond deals with a few things such as loss as it includes a very tender moment where he reveals to Domino about what happened to her brother. It’s Connery at his best as he definitely gives another solid performance as Agent 007.

Thunderball is a fantastic film from Terrence Young featuring another superb performance from Sean Connery as James Bond. While it is a bit of a step-down in comparison to its predecessors due to a few pacing issues. It is still a very fun and adventurous film that allows its audience to be entertained while getting involved with all of its suspenseful moments. In the end, Thunderball is a spectacular yet exhilarating film from Terence Young.

James Bond Files: The EON Films: Dr. No - From Russia with Love - Goldfinger - You Only Live Twice - On Her Majesty’s Secret Service - Diamonds Are Forever - Live & Let Die - The Man with the Golden Gun - The Spy Who Loved Me - Moonraker - For Your Eyes Only - Octopussy - A View to a Kill - The Living Daylights - Licence to Kill - GoldenEye - Tomorrow Never Dies - The World is Not Enough - Die Another Day - Casino Royale (2006 film) - Quantum of Solace - Skyfall - SPECTRE - No Time to Die