Originally Written and Posted at Epinions.com on 11/20/08 w/ Additional Edits. 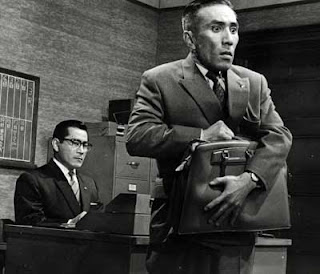 Based on William Shakespeare's play version of Hamlet, The Bad Sleep Well is the story of a young executive who seeks revenge for the death of his father to expose corruption in the place that he works at. Directed by Akira Kurosaw and screenplay by Kurosawa, Shinobu Hashimoto, Eijiro Hisaita, Ryzuo Kikushima, and Hideo Oguni, the film is set in a modern period to explore the world of post-war Japan's rise in the world of business. Starring Kurosawa regulars Toshiro Mifune, Takashi Shimura, Kamatari Fujiwara, Seiji Miyaguchi, Susumu Fujita, Masayuki Mori, and Kyoko Kagawa.The Bad Sleep Well is a provocative, harrowing, and engaging film from Akira Kurosawa.

A wedding celebration between Koichi Nishi (Toshiro Mifune) and Keiko (Kyoko Kagawa), the daughter of Public Corporation Vice President Iwabuchi (Masayuki Mori), is already underway. Yet, the company that also includes Administrative Officer Moriyama (Takashi Shimura) and Shirai (Ko Nishimura) as they're all celebrating this wonderful celebration. Yet, a detective (Susumu Fujita) appears as they arrest two corporate associates named Miura (Gen Shimizu) and Wada (Kamatari Fujiwara) for the possible link to the murder of a man named Fukura. When both men refuse to confess, prosecutors Nonaka (Chishu Ryu) and Okakura (Seiji Miyaguchi) decide to use embezzlement charges on the two as Miura commits suicide while Wada tries to do the same until he is saved by Nishi.

When word got out over Wada's suicide, Iwabuchi holds a press conference over the suicide while trying to hide some public scandal that's been going on for months. Yet, Wada is hiding at Nishi's old auto shop as he now works as a personal secretary for Iwabuchi. With help from Itakura (Takeshi Kato), Nishi makes a plan to help uncover the scandal as well as his father's death. At home, Nishi doesn't do much as he often has conversations with his playboy brother-in-law Tatsuo (Tatsuya Mihashi) while often tending to his handicapped wife whom he's starting to fall for. Targeting Shirai with help from Wada, the two men succeed in creating a sense of paranoia as he's starting to get into trouble with Moriyama and Iwabuchi over unaccounted money and other things. Realizing that Shirai has become a liability with claims that he saw the ghost of Wada, they decide to take care of the problem. Instead, Nishi thwarts that attempt to confront Shirai as he reveals to be the illegitimate son of Fukura.

With Shirai gone insane, Moriyama decides to investigate the motivation to these strange events in relation to Fukura's murder that also included the wedding cake of the building with a rose stuck out on a room in the seventh floor. Yet, Nishi realizes that his thirst for vengeance is complicated by his feelings for Keiko as Itakura and Wada try and help him. When Moriyama visits Fukura's widow (Natsuko Kahara), he makes a shocking discovery that reveals the motives for these strange events. When Nishi is exposed, he escapes and later kidnaps Moriyama in order to make him confess. Yet as they wait, Iwabuchi figures out what to do while Wada makes an unexpected move for Nishi that would finally make him question on what he would do. When a breakthrough emerges from Moriyama, there's hope for Nishi and his associates while Iwabuchi makes his own move that would prove to be catastrophic.

Taking a lot of cues from Hamlet, the film is about vengeance on a thematic level but it's also about loss. The film is about a man wanting to take vengeance on the man who took away the father he barely got to know just after a meeting with him that proved to be powerful. The next day, his father was gone through suicide as he vowed vengeance with the money he was given. Five years later, Nishi's plan to destroy the lives of the men who destroyed his father is getting closer but there's an irony to Nishi's plan along with the help of Itakura. When he gains Wada, he unexpectedly gets a conscience as he struggles to contend with his thirst for revenge and his sudden feelings for Keiko. When Iwabuchi suddenly is hit with all of these events and everything that's going on, he makes a move of his own that would not only be tragic but reveals some huge losses with twists reveal that makes the ending more tragic.

While the script Kurosawa and his writers create definitely draws a lot of influence from Hamlet, the direction is truly mesmerizing. While the film starts off a bit slowly with its wedding sequence, once it reaches into its tone of suspense. It starts to pick up as Kurosawa let things unravel piece by piece with its suspense and aura of mystery. Notably the scene where Shirai is spooked in his neighborhood in what he believes is the ghost of Wada. Yet, Kurosawa creates the film as if it's a modern-day tale with the intimacy and staging of a play with its interior settings. Along with his stylish yet smooth editing style with frame wipes and cuts to add a rhythm to its suspense. Kurosawa creates an intriguing film that is filled with a lot of theatricality and commentary about vengeance and identity.

Cinematographer Yuzuru Aizawa does great work with the film's black-and-white photography with its intimate shots in the film's interior settings while the bunker scenes are well lit with little lights as it has an exquisite yet haunting feel. Aizawa's best work is in the film's famous exterior street scene at night with its shade of night lights and darkness to convey the film's eerie tone and suspense. Production designer Yoshiro Muraki also does great work in the traditional/modern housing look of the Iwabuchi home as well as modern offices, Itakura's apartment, and the decayed look of the bunker where Moriyama is taken prisoner. Costume designer Shoji Kurihara does excellent work in the look of the suits the male actors wear while giving Kyoko Kagawa a great look with traditional Japanese garb, most notably her wedding dress.

Sound recordist Fumio Yanoguchi and effects editor Ichiro Minawa do brilliant work with the film's sound to convey the suspenseful atmosphere of several sequences while creating a sense of intimacy in the film's interior sequences. Composer Masaru Sato does fantastic work with the film's score for a more orchestral approach with flutes and strings to convey the film's sense of suspense and drama along with a few light-hearted pieces. While Sato also incorporates traditional Japanese music in the wedding scene along with a few other scenes, it's his orchestral flair that shines throughout the entire film.

The casting is truly phenomenal with small appearances from Kin Sugai and Toshiko Higuchi in their respective roles of Wada's wife and daughter, Natsuko Kahara as Fukura's widow, Gen Shimizu as Miura, Susumu Fujita as a detective at the wedding, and in the role of the prosecutors, Chishu Ryu and Seiji Miyaguchi as two men who suspect the events are in relation to the murders of Fukura. Tatsuya Mihashi is excellent as Iwabuchi's playboy son Tatsuo who is concerned about his sister's happiness while wondering where Nishi had been going as he also questions about the kind of person his father is. Takeshi Kato is really good as Itakura, Nishi's assistant who provides a lot ideas and counsel to Nishi while being the more cynical of the two men who help as his motives reveal to be something much bigger in relation to who he is. Ko Nishimura is great as Shirai, a corporate officer who becomes a target as his paranoia and troubles lead him into madness.

Kyoko Kagawa is great in the role as Keiko, the wife of Nishi with a bad leg as she wonders about her husband's sporadic appearances while learning the truth that causes conflict in her loyalty to her father and her husband. Takashi Shimura is also great as Moriyama, Iwabuchi's partner who takes matters into his own hands for the investigation where he makes a discovery and is later captured where he would reveal what happened to Fukura. The film's best supporting performance easily goes to Kamatari Fujiwara as Wada, a cowardice officer who later becomes the film's conscience as he tries to get Nishi to see reason about vengeance as he proves to be a powerful voice while angry over how he got himself into this position without seeing his own family.

Masayuki Mori is brilliant as Iwabuchi, the film's antagonist who plans and figures out how to make his moves about the scandal that would destroy him. Yet when he learns about Nishi, he would do things that would prove to be very horrible no matter who he hurts as he's a man that is about power. Even he has to fool the people who are closest to him as Mori is definitely amazing. Toshiro Mifune is superb as Nishi, the film's protagonist who seeks revenge for the death of the father he barely knew. Mifune's performance is wonderfully restrained in comparison to his more famous work as samurai characters where he gets to put on a suit, look normal, and even be a bit of a romantic. It's a very complex and subtle performance from the actor proving that there's more to the legendary actor than playing a badass.

The Bad Sleep Well is a brilliant film from Akira Kurosawa. Thanks to a great cast led by Toshiro Mifune, Masayuki Mori, and Kamatari Fujiwara, it's a film that features great acting and a theatricality that is fascinating to watch. Notably for the way Kurosawa takes his time to explore a man's thirst for revenge and the eventual outcome that it would unveil. In the end, The Bad Sleep Well is a compelling drama from the legendary Akira Kurosawa.

This is one of my many Kurosawa blind spots. I'm going to have to follow in your footsteps and do a marathon in the near future.

There was a Kurosawa marathon on Turner Classic Movies 2 years ago but I missed it due to the fact that I had no VCR, no DVR machine at the time, and I was just too depressed to do anything.

He's someone I really I want to do as I'm about to release five more old reviews of his works that I wrote a few years ago and hopefully end the month see Dodesukaden.