Originally Written and Posted at Epinions.com on 11/25/07 w/ Additional Edits. 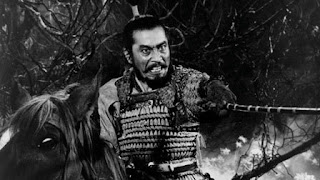 Based on William Shakespeare's Macbeth, Throne of Blood is the story of an ambitious lord who tries to fulfill a prophecy to become emperor with the aid of his power-hungry wife only to be haunted by a murdered lord. Directed by Akira Kurosawa and screenplay by Kurosawa, Ryuzo Kikushima, Hideo Oguni, and Shinobu Hashimoto, the film has Kurosawa taking Shakespeare's tale of ambition by setting it in medieval Japan and giving the story a looser feel. Starring Toshiro Mifune, Takashi Shimura, Minoru Chiaki, and Isuzu Yamada. Throne of Blood is an eerie and provocative film from Akira Kurosawa.

It's civil war in medieval Japan as Lord Tsuzuki (Hiroshi Tachikawa) is in danger of losing his position as three of his fortresses have been attacked by his adversary Inui. His longtime general Noriyasu (Takashi Shimura) suggests a strategy must be made to combat Inui's forces. Suddenly, news arrived that Taketori Washizu (Toshiro Mifune) and Yoshiaki Miki (Minoru Chiaki) have just defeated Inui's forces into retreat protecting two of the remaining fortresses. Word arrives to the two war commanders as they travel to the treacherous forest known as Spider’s Web Forest where they encounter a mysterious spirit (Chieko Naniwa) who tells them of a prophecy. The prophecy revealed that Washizu would become lord of a territory while Miki would become the new commander of the main fortress with his son (Akira Kubo) destined to become emperor.

When they arrive at Spider's Web Castle where their emperor lived, they're granted new titles that was foretold in the prophecy. While Washizu seems content with his new role, his ambitious wife Asaji (Isuzu Yamada) wants more believing that the prophecy is about Washizu more than Miki. Asaji's persuasions suddenly confuse Washizu when Lord Tsuzuki arrives at his place to stay while Miki runs Spider Web's castle believing that Inui will attack. Asaji convinces Washizu to murder the lord in order to fulfill his destiny while putting the blame on Noriyasu's men. Washizu does the deed with a lot of guilt as sides become divided with Noriyasu and the prince (Takamaru Sasaki) are convinced that Washizu killed Tsuzuki as they turn to Inui for help. Arriving at the castle, Washizu brings the coffin of Tsuzuki as Asaji tells him she's pregnant with child hoping to destroy Miki's prophecy of his son becoming emperor.

Miki, who has been Washizu's friend since childhood, becomes suspicious as a ceremony for Washizu’s coronation as the new emperor becomes troubled when Miki doesn't show up and Washizu keeps seeing a ghost. When Miki's son learns what happened and the fate of his father, he joins up with Noriyasu and the prince to fight against Washizu. Suddenly, Washizu's ambitions get the best of him when he meets the spirit again where another prophecy concerning his fate is told. With his wife now in trouble, Washizu is filled with guilt and paranoia over his actions as he meets his own fate.

Shakespeare's tale of lies, deceit, and ambition in Macbeth is indeed provocative in how a woman's ambitions distorts the mind of her husband whose fates would end in tragedy. For Kurosawa, he strips down some of Shakespeare's sense of psychology and its political tones from the play and translate it to the traditional, Japanese theatrical style known as Noh. The result is a theatrical drama that plays true to both Noh and Shakespeare as the film is really about a general whose own ideals are distorted by the ambitions of his wife and his own betrayal of himself. The film is definitely about character and its development through ambition. The script that was written by Kurosawa and his team of writers, the story is a meditative and provocative in its study of ambition as it stays faithful to Shakespeare's original play while bringing a new interpretation to the story.

Kurosawa's potent, solid direction is strong for its theatricality and emphasis to the Noh style of Japanese plays. While Kurosawa brings a huge scope to some of the film’s exterior, battle sequences. His interior settings are intimate to convey the theatrical tone of the film. More importantly, the staging and compositions of Kurosawa is eerie while some of the sequences involving the spirit is very haunting that is true to Shakespeare's original play. Notably the opening song that also closes the film that would foretold what was to come. Even the film's dramatic ending is filled with intensity as it plays to the mind of Washizu who starts off as this calm, innocent man to a power-hungry fool. With Kurosawa bringing some of his unique editing style of side-wipes and intense cuts to convey the film's drama. The result features Kurosawa at his most solid and ambitious without being over-the-top.

Cinematographer Asakazu Nakai brings some amazing black-and-white photography that included some wonderful shading and blinding lights for some of the film's forest, exterior sequences. Nakai's cinematography also captures some of the manic world of battle that includes a great depth of field to convey the danger that does on. The film's final sequence is wonderfully shot with its dark, grey look and the camera capturing the action. Nakai's work is truly superb in every frame.

The film's cast is brilliant featuring cameos from two Kurosawa regulars from The Seven Samurai like Seiji Miyaguchi and Isao Kimura as phantom samurai warriors. Smaller performances from Chieko Naniwa as the old spirit, Akira Kubo as Miki's son, Takamaru Sasaki as the prince, and Hiroshi Tachikawa as the emperor are brilliant for their small performances. Kurosawa regular Takashi Shimura as Noriyasu is excellent despite a small role as a general who understands strategy while knowing the truth about his emperor while trying to find ways to attack Washizu. Minoru Chiaki is great as Miki, a general who seems to understand things more than anyone in the entire film while being Washizu's only friend only to see him be corrupted. Isuzu Yamada is brilliant as the manipulative Asaji. Yamada’s performance is very restrained and subtle while managing to have a presence that is discomforting as well as maniacal. Her performance is worth noting for being a rare female persona, notably an antagonist who was willing to pull the strings for her own gain.

Throne of Blood is a sprawling yet entrancing film from Akira Kurosawa and company. With great performances from Toshiro Mifune, Minoru Chiaki, and Isuzu Yamada, it's a great introduction to Noh theater as well as one of Kurosawa's essential films. Fans of William Shakespeare will no doubt enjoy Kurosawa's interpretation of Macbeth and his devotion to Shakespearean drama. For anyone who loves both Kurosawa and Shakespeare and see the mix will no doubt enjoy Throne of Blood.

I consider this the best Macbeth adaptation ever made, and one of the very best adaptations of any of Shakespeare's works.

The only other adaptation of Macbeth that I've seen is Polanski's version back when I was a senior in high school. I don't remember much about that film.

Still, I'll take this film over anything other version of Macbeth.