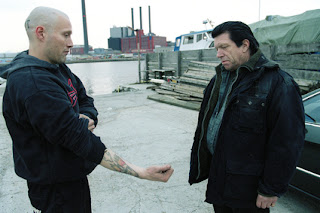 Written and directed by Nicolas Winding Refn, Pusher II: With Blood on My Hands is the sequel to the 1996 film Pusher that focuses on the drug culture on Copenhagen. In the second film, the film explores a drug-dealer’s former sidekick as he deals with new challenges in the world of crime and drugs as well as becoming a father for the very first time. The film features two characters from the previous film as its focus is on Tonny who is played by Mads Mikkelsen as the drug lord Milo, played by Zlatko Buric, also returns. Also starring Leif Sylvester, Anne Sorensen, Oyvind Hagen-Traberg, and Kurt Nielsen. Pusher II is a compelling yet visually-hypnotic film from Nicolas Winding Refn.

After being released from prison, Tonny returns to Copenhagen to work at a chop shop run by his criminal father known as the Duke (Leif Sylvester) who isn’t happy to see Tonny. Wanting to prove to himself to his father, Tonny decides to steal a car following a bad night with hookers where he ends up getting a stern lecture from his father. With his friend O (Oyvind Hagen-Traberg) trying to help him out, Tonny learns from O’s girlfriend Gry (Maria Erwolter) that her friend Charlotte (Anne Sorensen) has his baby. Tonny is surprised by the news unsure how to cope as the Duke’s partner Kurt the Cunt (Kurt Nielsen) has Tonny do things where things would often go wrong as Tonny would get the blame.

During a deal with Tonny’s old friend Milo that Kurt wants to do, things go bad as Kurt blames Tonny as he asks Tonny to shoot him in the arm and blame it on Arabs so the Duke wouldn‘t get upset. With the pressure of clearing a debt for his father and Charlotte wanting money for their unnamed child, Tonny gets some devastating news that leaves him becoming more concerned for his child. At a wedding party for O and Gry, Tonny’s concern for his child has him confronting Charlotte for her drug use as he ends up getting into trouble. When Kurt wants Tonny to aid him in something to help make things easy with the Duke. Tonny realizes that something isn’t right while his father wants him to do something that relates to a custody battle he’s having forcing Tonny to make a decision about his life.

The film is about a former drug dealer who returns from prison hoping to do good for his criminal father only to find himself getting into more trouble while learning he has a child that he’s grown to care for. It’s a film that in some ways is about redemption for a man who is an admitted fuck-up but with a good heart despite some of his bad deeds that includes rampant drug use. The film opens with a prologue where Tonny is being lectured by an inmate in prison about conquering his fear that would set up the main narrative as Tonny is a man driven by fear as he’s constantly berated by the people around him.

The screenplay explores Tonny as a man who is very flawed but also one who earns pity due to the fact that he was unloved by his father while having to do deeds where he’s also treated with indifference and little respect in his father’s criminal deeds. Making things worse is the fact that the woman he impregnated is a drug-addled whore who just wants money and really doesn’t care for the baby that he just found out. Though he’s wary at first about the baby, he would eventually come to care for him despite his uncertainty if he can care for the baby. Still, Nicolas Winding Refn would find ways for Tonny to eventually come to his senses where it would take a series of events that would push him to redemption and conquering his fear.

Refn’s direction is definitely entrancing for the way he opens the film with a simple scene of Tonny inside a cell talking to an inmate where it is followed by a scene of Tonny beating up someone and then being chased. It’s part of a setup of what Tonny is doing as Refn does reuse a lot of the techniques he had done with the first film. Yet, it’s more refined due to the fact that Refn wanted to focus on this man’s attempt to earn respect as that word is tattooed on the back of his head. Refn always has the camera in the back of Tonny’s head although the situations that Tonny is in doesn’t give him what he needs.

Since the film is shot on location in Copenhagen with hand-held cameras, it allows Refn to create a world that Tonny is in where he feels completely out of place by the people he’s with. Scenes such has the wedding party shows a world where everyone is celebrating but Tonny, who is berated by his father’s speech for being someone that is never going to amount to anything, has the camera fixed on Tonny who is watching everything around him. It’s a chilling scene where Refn is waiting for the moment for Tonny to snap. Overall, Refn creates a truly haunting film that explores a man’s attempt to gain respect in the world of drugs.

Cinematographer Morten Soborg does amazing work with the film‘s cinematography from the stylish lighting colors for the scenes in the wedding party and the brothels that Tonny is in to more entrancing grainy camera work for some of the nighttime exteriors in the Copenhagen locations. Editors Anne Osterud and Janus Billeskov Jansen do excellent work with the editing by utilizing a few jump cuts to play out some of the film‘s action while keeping things straightforward for the non-suspenseful moments of the film. Production designer Rasmus Thjellesen does fantastic work with the set pieces such as the Duke’s chop shop as well as the home of Gry and Charlotte to emphasize the world where Tonny is unwanted.

Costume designer Jane Whittaker does terrific work with the costumes from the suits that the Duke wears to the sweat clothes that Tonny wears to contrast the level of respect they have. Sound designer Jens Bonding does brilliant work with the sound to capture the atmosphere of the locations such as the sparseness of the chop shop to the raucous wedding party scene. The film’s score by Peter Peter and Keli Hlodversson is superb for its mixture of ambient to pulsating electronic music to play up the world that Tonny is surrounded by as it features music by several underground Danish acts compiled by music supervisor Lol Hammond.

The film’s cast is incredible for the ensemble that is created as it includes memorable small roles from Ilyas Agac as a gun dealer, Maria Erwolter as O’s girlfriend Gry, Karsten Schroder as the Duke’s brother Red, and Zlatko Buric as Tonny’s old friend in Serbian drug lord Milo. Oyvind-Hagen Traberg is very good as Tonny’s sole friend O who reveals to him about the baby while trying to get him not to mess things up. Kurt Nielsen is great as the dangerous Kurt the Cunt who gets Tonny into a lot of trouble and make him do things that are questionable. Anne Sorensen is wonderful as the drug-addled hooker Charlotte who verbally abuses Tonny for what he did to her as she treats him like shit.

Leif Sylvester is great as Tonny’s crime lord father the Duke who berates Tonny for his incompetence while publicly humiliating him as he would force Tonny to do something that is immoral as it’s a very chilling performance. Finally there’s Mads Mikkelsen in a phenomenal performance as Tonny. It’s a role where Mikkelsen displays bits of humor that he had previously played in the first film but has him become a much more confused man who couldn’t seem to do anything right while yearning to win his father’s respect. It’s an entrancing performance from Mikkelsen who makes Tonny a very endearing character despite his flaws and the uncertainty that he has.

Pusher II is a remarkable film from Nicolas Winding Refn that features an amazing performance from Mads Mikkelsen. While it may not have the more enthralling tone of the previous film in terms of its violence and energy. It is still an intriguing sequel for the way Refn explores the life a man who feels on the outs with the world he was once a part of. In the end, Pusher II is an extraordinary film from Nicolas Winding Refn.