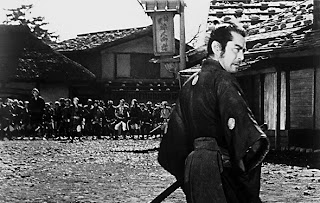 Directed by Akira Kurosawa and written by Kurosawa and Ryuzo Kikushima, Yojimbo is the story of a samurai who finds himself in the middle of a gang war between crime lords as he gets involved in hopes they kill each other off. The film has Kurosawa taking elements of the Western as it set in 19th Century Japan just as guns were introduced as the days of the samurai were finished forcing them to fend for themselves. Playing the lead role of Kuwabatake Sanjuro is longtime Kurosawa regular Toshiro Mifune as the film also stars Tatsuya Nakadai, Takashi Shimura, and Isuzu Yamada. Yojimbo is a phenomenal and adventurous film from Akira Kurosawa.

Walking into a village is a samurai warrior named Kuwabatake Sanjuro who overhears a farmer and his son arguing about the means to survive as the son wants to join one of the gangs in a gang war. After meeting the officer Hansuke (Ikio Sawamura) who suggests to Sanjuro to join one of the gangs, Sanjuro goes to a tavern where he meets the tavern keeper Gonjin (Eijiro Tono) who reveals to Sanjuro about the ongoing feud over control issues between a boss named Seibei (Seizaburo Kawazu) and his right-hand man Ushi-tora (Kyu Sazanka). Each men have different sponsors as Seibei is supported by a silk shop while Ushi-tora gets support from the sake brewer Tokuemon (Takashi Shimura) leading to an all-out war. Realizing the troubling situation, Sanjuro tells Gonjin that he'll play on both sides so both gangs could kill each other off.

After killing a few of Ushi-tora's men to get Seibei's attention, Seibei's wife Orin (Isuzu Yamada) and her son Yoichiro (Hiroshi Tachikawa) suggest to pay him an advance and later kill him. However, Sanjuro hears them as the battle between Seibei and Ushi-tora is halted when Sanjuro changes his mind once an official investigator shows up forcing the feud to be halted. After the investigator leaves to go to another town about a murder, Sanjuro thinks something is up after overhearing Ushi-tora's men having a drunken conversation as he captures them for Seibei while revealing to Ushi-tora about what he knows. Ushi-tora's brother Unosuke (Tatsuya Nakadai) arrives to up the ante as he captures Yoichiro while revealing to hold a pistol as an exchange for Ushi-tora's men went bad as he reveals to also have Tokuemon's mistress forcing Sanjuro to join Ushi-tora's gang after learning about the woman.

After tricking Ushi-tora's brother Inokichi (Daisuke Kato), Sanjuro frees the mistress telling her to flee with her husband and child with the money he's received. With this incident, Sanjuro watches the feud get more intense until Unosuke realizes what Sanjuro is doing as he captures him. Though Sanjuro was able to escape barely with Gonjin's help by taking him to a shelter. Sanjuro realizes what must be done in order to end a bloody war that is tearing a small town apart.

While the film visually and stylistically is inspired by American westerns, notably the films of John Ford. The film is also inspired by the novel Red Harvest by Dashiell Hammett about a gangster who plays both ways in the middle of a gang war. The script by Kurosawa and co-writer Ryuzo Kikushima is really about a study of a man with no moral justification or motivation rather than just kill for money and food. While the character of Sanjuro does have a few moments of morality including helping out a family in one important scene. He remains a loner and an observer who tries to figure out how to find peace in a little town ravaged by war. While Sanjuro may seem to be a very skilled, tough samurai, he's really a man who has to use his wits to play a game. The result is a great study of character who is trying to find his role for any kind of gain.

Kurosawa's direction is more stylish than any of his previous films, notably in the way he pays homage to the American western and John Ford. Particularly the way he sets up his shots in a way that is very stylized. With the use of the widescreen presentation that he started to use since The Hidden Fortress, Kurosawa manages to get more of what he wants in his presentation. Not only does he go for close-ups to observe the behavior of the characters but also the atmosphere they're surrounded by. With Kurosawa also serving as editor, he brings a nice, stylized pacing to the film that builds up on its momentum while it doesn't move too slow or too fast. Yet, the direction and editing also captures the intensity of battle with notable uses of the side-wipe transitions to shift scenes. The result overall is Kurosawa delving into style while bringing excitement and tension to the film as the direction is extremely masterful.

Cinematographer Kazuo Miyagawa, who also shot Rashomon, does some amazing work in the black-and-white photography to capture the tension and intimacy of some of the interior locations while a lot of the nighttime sequences are done with amazing style of shading lights and texture to convey the eerie tone of those scenes. Miyagawa's work is brilliant for its emphasis on the wide-scope that is true to the American western genre. Production/costume designer Yoshiro Muraki does great work in creating the look of the costumes that is true to 19th Century Japan while the look of the homes is great to show the differing worlds of the bosses where Seibei's place is a brothel and Ushi-tora's is more about sake. Sound recordist Choshichiro Mikami does excellent work in capturing the film's tense atmosphere of wind and rain to emphasize the tone of the western. Music composer Masaru Sato brings an amazing film score that is intense and unconventional with its mix of traditional, percussive Japanese music with a mix of dense saxophones and instruments to add the element of the western throughout the entire film.

The film's cast is truly superb with small performances from the likes of Namigoro Rashomon as Ushi-tora's giant, Ikio Sawamura as the cowardice officer Hansuke, Atsushi Watanabe as the cooper who reluctantly helps Sanjuro in the film's final moments, Kamatari Fujiwara as the silk-making owner Tazaemon, Yoko Tsukasa as Tokuemon's mistress Nui, Yoshio Tsuchiya as Nui's husband Kohei, Yosuke Natsuki as Kohei's son, Susumu Fujita as Seibei's samurai instructor Homma, and Kurosawa regular Takashi Shimura in a small role as the sake brewer Tokuemon. Throne of Blood star Isuzu Yamada is great as the greedy wife of Seibei who demands control while Hiroshi Tachikawa is good as Seibei's cowardice son. Seizaburo Kawazu is great as the experienced Seibei, a boss who is trying to vy for control while Kyu Sazanka is also great as Ushi-tora, the rival boss who has a gift for strategy.

Kurosawa regular Daisuke Kato is great as the dim-witted Inokichi, who is memorable for his round, ugly face while often being fooled by all as he brings some great comic relief for the entire film. Tatsuya Nakadai is brilliant as the pistol-wielding Unosuke who is in some ways, Sanjuro's intellectual equal as he tries to figure out his plans while being a cold-blooded killer who cheats with his pistol. Eijiro Tono is amazing as Gonjin, the tavern keeper who, like Sanjuro, is an observer who tries to figure out what Sanjuro is planning. Unlike Sanjuro, he's a man of morals and in some ways, is the film's conscience as he doesn't try to get involved yet is amazed at his brilliance in playing double.

Toshiro Mifune, a longtime regular of Kurosawa, is equally as powerful and brilliant in his performance as Sanjuro. In previous performances, Mifune often has to play some kind of maniacal character in films like Rashomon, The Seven Samurai, and Throne of Blood. In this film, Mifune is more stoic and subtle in his performance as he doesn’t do any kind of over-power drama. Instead, he is restrained as he tries to figure out what to do while in the more action-like sequences, his intensity is just unstoppable. Mifune's performance is just amazing to watch as he takes his own spin on the western protagonist by being the anti-hero. One with no moral justification and yet, he isn't the traditional hero as well.

Yojimbo is an exhilarating yet thrilling film from Akira Kurosawa that features an incredible performance from Toshiro Mifune. The film is definitely among one of Kurosawa's best films as well as a great introduction to anyone new to Kurosawa. Fans of westerns will no doubt see this film as a unique interpretation of the genre that would influence a great remake in Sergio Leone's A Fistful of Dollars. In the end, Yojimbo is an outstanding film from Akira Kurosawa.

Ohh this is definitely one of my favorite Mifune/Kurosawa collabs. I do love noticing the similarities between this and Fistfull, even if this is so superior.

I saw A Fistful of Dollars before I saw this film, but I liked both of them. I never have gotten around to watching the sequel Sanjuro, though.

I'd like to collect your opinions? Which do you prefer,Yojimbo or A Fistful of Dollars?

@Alex-Of course the Kurosawa film is superior though it should be noted that if Kurosawa wouldn't be rich if it wasn't for Sergio Leone to do A Fistful of Dollars.

@David-Yojimbo, I saw that one first and then I saw Fistful. Both are great but Kurosawa wins with his story.