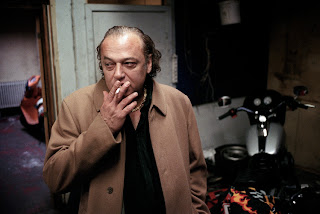 Written and directed by Nicolas Winding Refn, Pusher 3: I’m the Angel of Death is the story of a Serbian drug lord who struggles to maintain his sobriety as he faces many challenges in the wake of his daughter’s upcoming birthday. The third and final film of the Pusher trilogy, the film explores the character of Milo who had been in the previous films as he is played by Zlatko Buric. Also starring Kurt Nielsen, Slavko Labovic, Levino Jensen, and Ilyas Agac reprising their roles from the previous films. The cast also includes Marinela Dekic, Vasilije Bojicic, and Kujtim Loki. Pusher 3 is a ominous yet hypnotic film from Nicolas Winding Refn.

Milo’s daughter Milena (Marinela Dekic) is about to celebrate her 25th birthday at a lavish party in a Copenhagen dining hall as Milo is trying to handle all of the festivities. After learning that Milena is dating a drug dealer named Mike (Levino Jensen), Milo is struggling to maintain his business as well as his newfound sobriety as he’s been going to meetings for recovering addicts. Still wanting to maintain his role as a drug lord, a shipment he was supposed to receive from an Albanian supplier named Luan (Kujtim Loki) revealed to be ecstasy rather than heroin as Milo has no idea what to do with it. Luan’s partner Rexho (Ramadan Hyseni) suggests that Milo should sell it so he can get a new shipment of heroin in return.

When one of Milo’s associates in Muhammad (Ilyas Agac) arrives with his daily take, he tells Milo about the ecstasy as he decides to help Milo sell it as he asks for a bigger cut in return. Milo agrees as he’s trying to prepare food and gather things for Milena’s party as his henchmen become ill with food poisoning forcing Milo to do things himself. At the party, Milo becomes worried about the food as he tries to order fish to replace some of the food he cooked. Instead, an encounter with a dealer in Kurt the Cunt (Kurt Nielsen) adds to trouble while Rexho and his Polish arrive at Milo’s home base with a young hooker forcing Milo to do things as Muhammad hasn’t returned with the money.

With Rexho ordering Milo around to remind him of the huge debt he has, things get worse after a bad deal between Rexho’s Polish friend and a brothel madam named Jeanette (Linse Christansen) over the young hooker. Milo decides to take matters into his own hands where he turns to his old friend Radovan (Slavko Labovic) for help.

The film is about the day in the life of a drug lord who finds himself becoming irrelevant as he’s dealing with his daughter’s birthday, younger drug dealers, and trying to be sober. All of it is told from Milo who was seen in the past two films as a powerful yet friendly drug lord who carries an air of respect. In this film, Milo is a shell of his former self due to these changing times while he is forced to cater to these newer, younger drug dealers who feel like they are more powerful than he is. It’s all part of the world that Nicolas Winding Refn creates to explore this man’s fall as he tries to do what he does while being a good father to his daughter who at times can be a bit selfish towards him. Even as she knows about her father’s business and wants in so her boyfriend can do better.

The screenplay is really a character study of sorts where it follows Milo doing all sorts of activities while going to these addict meetings where he reveals his struggle and such. In the course of the day, things escalate as he has to deal with his daughter, her ambitious boyfriend, all these new dealers, an old one, and everything else where things eventually escalate in the third act. Since the film revolves around a man dealing with these new dealers where he gets screwed in the process. It leads to this third act where an old character from the first film in Radovan is re-introduced but as a very different man who still has his old skills.

Refn’s direction is definitely more engaging in the way he explores the day in the life of this man as it begins with Milo in an addicts anonymous meeting where he reveals he’s been sober for five days. With a lot of hand-held cameras including a scene around the party at a dining hall where the camera is always wandering the table. The direction is very potent to establish the fall of a once powerful drug lord who is struggling to get through an entire day. Particularly as it features scenes of Milo inside a room all by himself where he’s just smoking a cigarette just to get through the day. Even as the film is progressed where Milo would smoke something that is laced with some drugs.

The film eventually gets darker where Refn’s camera becomes much tighter and more in control with these compositions where it’s shown from Milo’s perspective as he’s looking at what is happening around him. Notably the scene involving Rexho, Rexho’s Polish friend, and a brothel madam discussing about the transfer where it’s a simple scene where nothing drastic happens but some of it is shown from Milo’s perspective where he is later seen in the background. The film’s third act is really the most intense moment due to the violence that eventually occurs where there is a newfound brutality that Refn does present as it features the return of an old character from the first film. Overall, Refn creates a truly mesmerizing and chilling film that serves as an intriguing study in the day of a man's life.

Cinematographer Morten Soborg does amazing work with the film‘s stylish photography from the moody interiors created for the party scenes and exterior nighttime shots to the more brighter but crisp look of Milo‘s home base at night. Editor Miriam Norgaard and Anne Osterud do great work in the editing by creating stylish jump cuts to play around with Milo‘s state of mind as well as slower more methodical cutting sequences to help enhance his troubled mood. Production designer Rasmus Thjellesen does nice work with the set pieces such as the place that Milo runs to the dining hall where Milena is having her party with its balloons and such.

Costume designer Jane Whittaker does terrific work with the costumes from the suit that Milo wears to more stylish clothing that the younger dealers were to contrast the different worlds the characters live in. Sound designer Jens Bonding does superb work with the sound to capture the atmosphere of the birthday parties to the sparse sounds of some of the locations that Milo is at. The film’s score by Peter Peter is a wonderful mixture of driving rock and ambient music to set a mood for Milo’s troubled journey in a tense day of his life as it is easily the best score of the trilogy.

The casting by Pernille Lembecke is brilliant for the ensemble that is created as it features some memorable small performances from Linse Christiansen as a brothel madam, Vasilije Bojicic as Milo’s henchman Branko, Levino Jensen as a low-level drug dealer/Milena’s boyfriend Mike, Kurt Nielsen as the troublemaking drug dealer Kurt the Cunt, Kujtim Loki as an Albanian supplier named Luan, and Slavko Labovic as Milo’s old friend Radovan who steals the show as a hood who turned straight. Ramadan Hyseni is very good as a sleazy gangster in Rexho who serves as Luan’s translator while Ilyas Agac is excellent as a young dealer named Muhammad who tries to help Milo with a deal only for something to go wrong.

Marinela Dekic is wonderful as Milo’s daughter Milena who is trying to have a lavish birthday party while wanting to ensure about her financial future as she’s a character who is quite complicated where Dekic allows her to not be a completely un-likeable person. Finally, there’s Zlatko Buric in a marvelous performance as the Serb drug lord Milo. Buric’s performance is very different from the performances he gave in the previous film where he allows himself to show humility as well as a man on the edge as he tries to deal with a tense day. It’s definitely the best thing Buric has done as he creates a truly exhilarating performance as Milo.

Pusher 3 is an incredible film from Nicolas Winding Refn that is highlighted by Zlatko Buric’s brooding performance. While it may not have some of the more intense, exciting moments of the previous films of the trilogy. It is still a very interesting film for the way it highlighted a day in the life of a character losing control. In the end, Pusher 3 is a phenomenal film from Nicolas Winding Refn.

The first one remains the best, but I love how the series comes full circle to show what happens to Milo, and this chapter really is a fascinating character study.

For awhile I thought he would run out of ideas and vanish into obscurity, but luckily Refn has really developed into one of the most exciting directors working today.

I too prefer the first one as well though I think the third one is a close second.

I recently saw a doc on Refn this weekend where he made the last 2 Pusher films out of disdain and desperation following the failure of Fear X yet he said that making those 2 films really helped him as a filmmaker.

I'll discuss more about Refn as I'm going to finally release my Auteurs piece on him in a few days.