Originally Written and Posted at Epinions.com on 2/11/10 w/ Additional Edits. 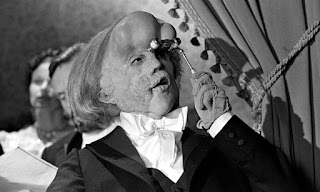 Joseph Merrick is known mostly as the Elephant Man due to a rare, congenital disorder around his face and body.  Treated like an animal in Victorian-era England, it was due to the meeting of a physician named Frederick Treves where Merrick was treated like a human.  Though he would die at age 27 in 1890, his story was considered a source of inspiration.  In 1979, a play about Merrick, though they changed his name to John, became a hit on Broadway which included a 1980 performance run by David Bowie.  Among those watching that play was Mel Brooks who decided to develop a film version on Merrick's story as he teamed up with one of his new favorite directors in David Lynch.  The duo would create what is considered one of the finest tearjerkers in cinema simply called The Elephant Man.

Directed by David Lynch with a script written by Lynch, Eric Bergen, & Christopher De Vore based on the books by Frederick Treves and Ashley Montagu.  The Elephant Man tells the story of Frederick Treves' discovery of John Merrick from a circus sideshow as he rescues and later show him humanity.  Even as Merrick would receive acceptance from the rich world of Victorian society England as well as the prejudice of others in a complex yet harrowing film.  Starring John Hurt, Anthony Hopkins, Freddie Jones, Anne Bancroft, Wendy Hiller, Hannah Gordon, Michael Elphick, & John Gielgud.  The Elephant Man is a harrowing yet powerful film from David Lynch.

Frederick Treves (Anthony Hopkins), a surgeon, walks around in a London carnival in the late 1800s as he looks around for interesting things.  He follows a policeman to a place where they hold circus freaks where among them is the mysterious Elephant Man.  Presenting the Elephant Man is a brutish promoter named Bytes (Freddie Jones) as Treves wants to see the Elephant Man up close.  With help from Bytes' young assistant (Dexter Fletcher), Treves finally sees the Elephant Man (John Hurt) in the flesh as he wants to examine physically.  Treves unveils the man to fellow physicians as the Elephant Man whose name is John Merrick is seen as a phenomenon of sorts.

Upon returning to Bytes, Merrick is suddenly beaten where he is ill as Treves decides to treat him after realizing how ill Merrick is.  With reluctant help from chief nurse Mrs. Mothershead (Wendy Hiller), Treves tries to communicate with Merrick while making reports to his superior in Mr. Carr Gomm (John Gielgud) as slowly, Merrick starts to talk.  When Treves presents Merrick to Gomm, Gomm isn't impressed until he hears Merrick recite Psalm 23.  Realizing that he is a man of intelligence and sophistication, Treves introduces him to various people of Victorian society as he is moved to a suite.  While Mrs. Mothershead might believe that it isn't a good idea.  Treves believes that introducing to people of importance might give Merrick acceptance.

After introducing Merrick to his wife Ann (Hannah Gordon), Treves learns that Merrick's most valuable possession is a picture of his mother that leaves Ann overwhelmed with emotion.  Another visit from an important member of Victorian society in actress Madge Kendal (Anne Bancroft) left an indelible impression on Merrick as the two red lines from Romeo & Juliet.  Despite these visits and Mrs. Mothershead's warning, Treves realizes that he might set Merrick up for trouble as he is aware that not everyone will accept Merrick as who he is.  Even as a night porter (Michael Elphick) gets people to view Merrick in his deformed state where one night also included Bytes who takes him back to his freak show.  Realizing that Merrick was abducted, Treves feels responsible as he confronts the night porter while Merrick would eventually escape Treves with help from fellow freaks as he returns to London where he's chased by a mob of people as he screams words of who he is as Treves wonders if he did the right thing in introducing Merrick to the world.

The film does have strong themes about prejudice and acceptance but it's really about the relationship between Frederick Treves and John Merrick.  Treves is a man who is intrigued by Merrick as he wants to examine him and show him to the world.  Yet, as his character develops.  He becomes a man aware that he might be doing something wrong in exploiting Merrick's deformed condition along with the fact that not everyone will accept him.  Treves is a complex character and unlike the brutish Bytes, is a man who is willing to treat Merrick like a human being instead of a freak.

Merrick himself, is a character that is just as interesting as he is revealed more and more to be a man of great intelligence and sophistication.  The reason he doesn't speak early in the film is because he plays dumb as a defense mechanism where once he recites Psalm 29, Merrick is unveiled for who he really is outside of his deformed state.  That moments ends the first act where the second act has him being introduced to people of high society while being accepted by nurses who were scared at him at first.  The film's third act is the night porter exploiting Merrick to various people and Bytes' return to reaffirm the idea that not everyone will accept Merrick that would later feature a climatic moment where Merrick screams "I am not an animal, I'm a human being" after being chased by an angry mob of people.

The script written by David Lynch, Eric Bergen, and Christopher De Vore is truly superb in its structure as well as characters who are just as interesting as the two main characters.  Particularly Mrs. Mothershead who is a conscience of sorts despite being a very hard, no-nonsense woman.  There's also Madge Kendal who finds the soul and beauty behind the deformity of Merrick as she becomes this warm, maternal kind of figure who has more compassion than the people Merrick would meet from high society.

While the screenplay is full of memorable characters, plot developments, and a fascinating structure.  It's David Lynch's direction that makes the film more mesmerizing than the story itself.  While he maintains something simpler in a lot of scenes that are shot in London including intimate scenes where characters interact along with Merrick building a model of a cathedral.  Lynch does pull in some amazing yet surreal visual sequences including an opening scene of a woman being attacked by an elephant.  Lynch's visual style is truly hypnotic while using close-ups to convey the sense of strong emotion without being too manipulative or too sentimental.  More intense sequences have a rhythm where Lynch is very engaging into what is happening though he knows where not to use a close-up.  The overall work Lynch does is magnificent as it shows a young director utilizing his talents to create a visually entrancing yet heart wrenching film.

Cinematographer Freddie Francis does spectacular work with the film's black-and-white photography.  Francis' photography has a sense of beauty for the scenes at the hospital and high-class places while in the poor side of London.  It's very ugly and there's a sense of grit to the way it looks and feel.  Even in some of the surreal imagery, there's a mixture of both as Francis's photography is phenomenal.  Editor Anne V. Coates does an amazing job with the film's editing from straightforward jump-cut and transitions to some fantastic work in the use of dissolves.  Notably some slow-motion, half-speed cuts for the film's opening sequence and layered dissolves to convey the dreams that Merrick and Treves would have.

Production designer Stuart Craig and art director Robert Cartwright do excellent work with the look of late 19th Century hospitals and buildings along with the look of the decayed carnival and freak shows that is displayed where Treves encounters in the beginning of the film.  Lynch's longtime costume designer Patricia Norris does brilliant work with the period-setting costumes from the suits and tuxedos the men wearing including John Hurt as Merrick and the dresses that is true to authentic to that period.  The make-up design by Christopher Tucker is really one of the film's technical highlights for recreating the head and body of the Elephant Man as it is truly amazing for its design and sense of beauty behind the deformity of the man itself.

Sound editor Peter Horrocks along with longtime Lynch collaborator Alan Splet on sound design and sound effects do great work in sound work for the film.  With Lynch also doing sound design, the film has a sense of atmosphere to convey the world that Merrick is surrounded by including the dream sequences that has a haunting feel as the sound work is truly brilliant.  The music of John Morris is wonderful for its plaintive yet lush orchestral sound to convey the sense of emotion of the film.  Even in some upbeat scenes along with dreamy sequences and intense moments as Morris' score is superb.

The casting by Maggie Cartier is amazing for its array of actors that include small appearances from Kenny Baker as a dwarf who helps Merrick escape, David Ryall as a drunken man with a pair of hookers, Tony London as a young porter, and in dual roles of Merrick's mother, Phoebe Nicholls and Lydia Lisle.  Other notable small roles include Lesley Dunlop as the nurse Nora, John Standing as an associate of Treves, Hannah Gordon as Treves' wife Ann, Helen Ryan as Princess Alex of Wales, and a young Dexter Fletcher as Bytes' young apprentice.  Michael Elphick is excellent as a sleazy night porter who wants to exploit Merrick for profit while Freddie Jones is superb as the brutish yet disgusting Bytes who treats Merrick as a freak only to hate him more after he abducts him.

Wendy Hiller is phenomenal as the hard-nosed Mothershead, a chief nurse who is organized while being friendly to Merrick despite her disciplined, stern persona as she is real standout.  Anne Bancroft is superb in a cameo role of sorts as Madge Kendal, a stage actress who helps Merrick find his inner beauty.  John Gielgud is great as Carr Gomm, Treves' superior who isn't impressed by Merrick until hearing him recite Psalm 23 as he finds Merrick a fascinating figure while giving him a home at the hospital.

Anthony Hopkins is amazing as the sympathetic Frederick Treves, a doctor who is horrified by Merrick and his condition along with the way he is treated.  Hopkins' calm yet compassionate performance is truly mesmerizing in how he is trying to be balance in being a doctor and a man.  Even as Treves is aware that he might be like Bytes in exploiting Merrick as Hopkins shows that even someone as good as Treves can be flawed as it's one of Hopkins' finest roles.  Finally there's John Hurt in what is definitely his greatest role of his career.  Though he is hiding under heavy makeup, Hurt's haunting portrayal of a man seen as a monster is heart wrenching in the way Hurt plays him both physically and emotionally.  There's a bit of charm and kindness to his role as it's definitely a brilliant performance for the famed, veteran actor.

The Elephant Man is an entrancing yet haunting film from David Lynch featuring two superb performances from Anthony Hopkins and John Hurt.  The film is one that is hard to watch at first but it has a great emotional payoff at the end as it truly earns its reputation as a great weepie.  Fans of David Lynch will no doubt consider this to be one of his finest films while in comparison to the rest of his film work.  It's one of his most accessible despite the fact that he is one of cinema's most unconventional auteurs.  In the end, The Elephant Man is a heartbreaking yet powerful drama from David Lynch.