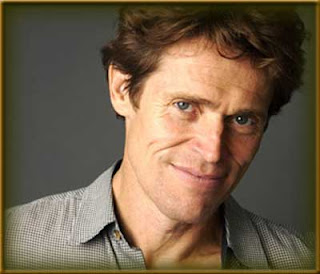 One of the most versatile and adventurous actors working today, Willem Dafoe is an actor who is willing to play anything or anyone. Whether it’s a gang leader, a super-villain, a fish, a rat, a platoon sergeant, or a vampire. He always put his own charm into these roles no matter how bad the film is or how complicated it can be. Dafoe is an actor that truly loves his work as he always will bring something to a character no matter how big or small that character is. So for this month’s LAMB Acting School 101, here is my top 10 favorite performances from Willem Dafoe.
1. Klaus Daimler-The Life Aquatic with Steve Zissou

While it’s the weakest film Wes Anderson has done in his career so far, the highlight of the film aside from Bill Murray is Dafoe as his longtime second-in-command. Dafoe playing a German crew member who has an undying loyalty for Murray’s Zissou character displays what is certainly Dafoe at his funniest. Whether it’s sparring with Owen Wilson over Cate Blanchett or just feeling jealous over Wilson and Murray’s new-found friendship. Dafoe always stood out whether he steps out of line realizing that he was to leave as he got confused or moaning about the fact that he’s in B squad as Murray’s Zissou said “but you’re the B-squad captain. Now you always know that Esteban and I always considered you to be our baby brother”. It is Dafoe’s reply that really makes the scene as he says, “Actually Steve, I always thought of you as my dad.”
2. Sgt. Elias-Platoon

For his breakthrough role in Oliver Stone’s 1986 Oscar-award winning film, Dafoe’s performance as Sgt. Elias has Dafoe play a father figure to Charlie Sheen’s Pvt. Taylor. Dafoe’s subtle yet compassionate performance allows his character to bring some peace and sanity to a war that is filled with chaos and confusion as he often spars with Tom Berenger’s Sgt. Barnes who is the opposite of Dafoe’s character. It is a chilling performance from Dafoe but certainly an essential in his body of work.
3. John Henry Carpenter-Auto Focus

In Paul Schrader’s eerie bio-pic about Hogan’s Heroes TV star Bob Crane, Dafoe plays the creepy John Henry Carpenter. A man that had supposedly killed Crane though the film explored Crane’s friendship with the electronics expert who would film Crane’s sexual exploits. Dafoe brings a dark humor to his performance as the man who enabled Crane from becoming a good man to a depraved sex addict who loses his career. It’s a magnificent supporting role proving what power Dafoe has when he can play second fiddle to Greg Kinnear as Bob Crane.
4. Gill-Finding Nemo

While it’s an animated film from Pixar and director Andrew Stanton, Dafoe brings a subtle yet mesmerizing performance as the voice of a scarred but ambitious Moorish Idol fish named Gill. Dafoe helps a young clown fish named Nemo along with other fishes to escape a tank as they lots of plans while they call Nemo “shark-bait”. Dafoe also has a weariness in a scene where he talks to Nemo about his own experiences. It’s a role that has Dafoe showing that he can be funny and dramatic while easily bringing life to a fish as it’s one of his more accessible performances that reaches a wide audience.
5. He-Antichrist

In Lars von Trier’s 2009 masterpiece, Dafoe plays a man who had just lost his son while his own wife is consumed with grief. Dafoe’s character is also a psychiatrist who tries to help out his wife unaware of how insane his wife is. It’s a role that is complex as Dafoe ends up being beaten up, having a wheel being drilled through his leg, and dealing with a raven while hiding from his wife. It’s a very demanding yet exhilarating performance as he really helps with the more intense performance from his co-star in Charlotte Gainsbourg.
6. Raven Shaddock-Streets of Fire

In Walter Hill’s 1984 cult-classic, Dafoe gets his first major role playing the tough yet maniacal villain Raven who kidnaps Diane Lane’s Ellen Aim. It’s a typical kind of villain role where Dafoe gets to sport a grin and sport some silly hairdo while looking like a vampire. Yet, there’s something engaging about his performance where he brings more than what the script offers. It’s a great character and Dafoe just makes Raven seem cool despite the fact that he’s a bad guy.
7. Jesus-The Last Temptation of Christ

In what is certainly a challenging role in Martin Scorsese’s controversial adaptation of Nikos Kazantzakis’ novel. Willem Dafoe definitely gives a towering performance as Jesus Christ by portraying him as an anguished human being. It’s a role that not many are willing to do as Dafoe goes all-out by bringing some humanity to a man as revered as Jesus of Nazareth.
8. John Clark-Clear & Present Danger

In the adaptation of Tom Clancy’s novel with Harrison Ford as Jack Ryan, Dafoe gives what is certainly a memorable supporting turn as a secret fields operative. Dafoe plays a man who is a pawn of secret drug war run by the President and his advisors. Dafoe creates a character that is more engaging as he has some great scenes with Ford as he turns into an unlikely ally who tries to do what is right in a complicated drug war.
9. Bobby Peru-Wild at Heart 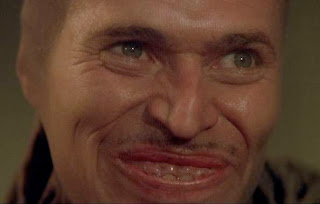 In what is certainly his most over-the-top but humorous roles of his career, Dafoe plays a sleazy criminal with no teeth and a weird grin. It’s a small role but one that truly stands out as Dafoe definitely spends his time with Isabella Rossellini. Even going toe-to-toe with Nicolas Cage in David Lynch’s crazy, romantic road film as Dafoe brings a lot of much-needed dark humor where his character would reveal his true motives in grand style.
10. Norman Osborn-Spider-Man

In what is certainly a role that introduced Dafoe to a new generation of filmgoers, Dafoe’s performance as Norman Osborn/The Green Goblin is one of the most memorable moments of the Spider-Man film series that is helmed by Sam Raimi. Dafoe brings a complexity to the Osborn character as a man torn by his admiration for Peter Parker and the evil character he had created. In the role of the Green Goblin, Dafoe brings a slimy charm to the character that is so much fun to watch. Even as Raimi allowed Dafoe to make cameos for the next two films.
Honorable Mentions:

Throughout his nearly 30-year career in films, Dafoe has played a wide variety of roles that proved his range as an actor. Whether its low-key roles as the straight-man in films like American Psycho, a creepy vampire in Shadow of the Vampire, or villainous roles in Once Upon a Time in Mexico and XXX 2. There is always a performance from Willem Dafoe that is a joy to watch. One of them is a very overlooked performance in The Clearing as a man who kidnaps Robert Redford wanting revenge for being fired. It’s a very understated dramatic performance where and Redford are equals in an unusual kidnapping film.

Another notable dramatic performance that Dafoe should be noted for is a small role in Lars von Trier’s Manderlay where he plays James Caan’s role in the previous film Dogville. This time around, Dafoe brings that same understated tone to his performance as he warns his daughter about imposing ideas into a world that she doesn’t know. Another small performance that really stands out is in the anthology film Paris Je T’aime where he plays a cowboy comforting a grieving Juliette Binoche in Nobuhiro Suwa’s segment.

While Dafoe is largely known for being a dramatic actor and working for such revered filmmakers as Wim Wenders, Werner Herzog, and Julian Schnabel. Dafoe is also an actor with a great sense of humor in such films like John Waters’ Cry-Baby where he plays a prison guard with a wonderful Southern accent. Another notable comedic performance is the Dick Cheney-inspired role as the chief of staff in Paul Weitz’ American Idol/political satire American Dreamz. Other notable comedic performance Dafoe brings are wide in range whether it’s an overly-pretentious filmmaker in Mr. Bean’s Holiday or as cider-drinking rat in Wes Anderson’s stop-motion animated adaptation of Roald Dahl’s Fantastic Mr. Fox. It is clear that Dafoe always brings it when it comes to roles as zany as those characters.

When it comes to acting, there is no one that does it better than Willem Dafoe. The man can play it all and he can reach a wide audience whether it’s a child or an adult. It’s clear that this is a man who loves to act, even if it’s appearing in a bad movie where he at least tries to bring a performance. Until then, we need more actors like this as when it comes to performances. Willem Dafoe is a guy that anyone can count on to bring it.
© thevoid99 2011
Posted by thevoid99 at 11:50 AM

I loved your round-up of Willem Dafoe roles. He's quite possibly one of my top 3 favorite actors. I just glanced over your site and, not being one to use the soon-to-be-defunct Friend Connect, was looking for an alternate way to subscribe to your updates. Are you on Google+ or have an RSS feed? Your blog looks like a great way to keep up with some of the films I'd like to see. Thanks!

Thanks for checking out my blog.