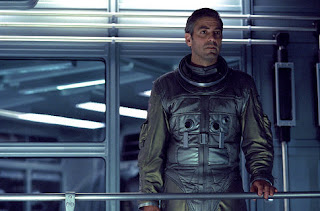 Since his comeback in the late 1990s, Steven Soderbergh has become a director who knew no bounds once he entered into the 2000s. With films ranging from experimental digital features to Hollywood-star power franchise films to even a hypnotic tale of drug-trafficking or creating a massive bio-pic on Che Guevara. Soderbergh created films at a prolific rate from 2000 through 2009 that showed his range as well as his fearlessness. In 2002, Soderbergh teamed up with James Cameron to create an adaptation on Stanislaw Lem’s Solaris that was previously made thirty years earlier by famed Russian auteur Andrei Tarkovsky. While borrowing some of Tarkovsky’s visual ideas, Soderbergh also put his own ideas into his own take on Solaris.

Written for the screen and directed by Steven Soderbergh, Solaris tells the story of a psychologist who goes to space station at a nearby planet to meet with a couple of people with strange claims. During this trip, he sees a manifestation of his dead wife appearing wondering what is going on as well as the guilt over her death. With James Cameron as the producer, Soderbergh’s adaptation is an update of sorts of Tarkovsky’s acclaimed version with newer elements for its audience. Starring George Clooney, Natascha McElhone, Viola Davis, Ulrich Tukur, and Jeremy Davies. Steven Soderbergh’s version of Solaris is an intriguing yet mesmerizing film.

Dr. Chris Kelvin (George Clooney) is a widowed psychiatrist who gets a message from a friend of his named Gibarian (Ulrich Tukur) about strange things happening in a space station that is orbiting a planet called Solaris. Sent by the corporation who is funding the mission, Kelvin goes to the space station to find out what is going on. Arriving into the space station, he learns that Gibarian along with several crew members and the security that was supposed to retrieve them either died or disappeared. The only people left is a man named Snow (Jeremy Davies) and a woman named Dr. Gordon (Viola Davis) as both are reluctant to reveal what is going on.

Kelvin stays at the station as he sees a little boy running around while at night when he sleeps. He thinks about his late wife Rheya (Natascha McElhone) about the time they met and their love affair where all of a sudden, he sees in the space station wondering how she appeared. Thinking she’s a ghost, he puts her in a pod for her to leave only to realize that she’s going to come back in some form. Talking to Snow and Gordon, Kelvin realizes what is going on as does Rheya who has these memories of herself that led to her own suicide as she realizes what she is. For Kelvin, it reminds him of the bad memories he has about Rheya’s death as he gets a visit from a manifestation of Gibarian who tells him about Solaris.

Realizing that Rheya is reliving her self-destructive behavior, Kelvin believes he can redeem himself for all of the things he did wrong. Gordon meanwhile, finds a solution to end these strange manifestations as Rheya considers this move much to Kelvin’s chagrin. Yet, Rheya knows that she isn’t the woman that Kelvin fell in love with as Kelvin makes another discovery about the space station and Solaris itself.

Solaris is about a psychiatrist going into a space station to find out these strange occurrences happening as he gets a visit from his late wife. That’s what both Andrei Tarkovsky and Steven Soderbergh told in their cinematic versions of Stanislaw Lem’s novel. Yet, the difference between Tarkovsky’s and Soderbergh’s version is that Soderbergh chooses to focus more on Kelvin’s relationship with his wife rather than the relationships with the people he encounters other than his wife.

Since the script has Soderbergh using his own experience surrounding his first marriage as a template, he creates a character study of sorts about a man trying to deal with his wife’s reappearance as well as the guilt over her suicide. The similarities that he and Tarkovsky have is exploring Rheya’s behavior as well as the fact that she isn’t the person that Kelvin fell in love with. What Soderbergh does add to Rheya is a bit of back story about her and Kelvin through flashbacks. The flashbacks add an emotional element to Kelvin’s sense of guilt and his yearning to redeem himself while trying to help the surviving crew members. The script is an excellent piece of character study that carries an element of suspense with a bit of a twist that comes out late in the film.

Soderbergh’s direction is truly hypnotic from the way he creates the planet of Solaris to the way he uses the flashbacks for Kelvin’s guilt. Also doing the cinematography and editing under his respective alias in Peter Andrews and Mary Ann Bernard. Soderbergh allows himself to simplify the story a bit while creating an update of sorts for this idea of the future. Shooting many of the flashback scenes in Los Angeles while a lot of the film is shot in a soundstage. Soderbergh creates something that is a bit cold when the story takes place station as he creates dazzling tracking shots and movements to let the audience be enraptured by its atmosphere.

One notable scene that is an ode to Tarkovsky’s version is a scene where Kelvin is looking at Rheya as the camera pans to the right slowly to see various versions of Rheya appearing. It’s Soderbergh allowing people to play up to the mystery that is Solaris as the photography of the film is very eerie for the look of the space station while dark and stylized in the film’s flashback scenes. While the running time of Soderbergh’s Solaris is an over an hour shorter than Tarkovsky’s version with a leisured pacing that moves the film a bit faster. The editing allows Soderbergh to simplify the story while creating transitions and straightforward cuts to move the story including the flashback scenes. While it might not have the broader views of life and death that Tarkovsky had in his version of Solaris. Soderbergh does create a fascinating yet engaging sci-fi drama that plays to his strengths as a director.

Production designer Philip Messina, along with a team of set decorators and art directors, creates an amazing look to the space station with its high-tech look and slivery walls to give the film a cold feel that is typical of a lot of sci-fi films. Costume designer Milena Canonero does an excellent job with the costumes from the red dress that Rheya wears throughout the film including the dresses during the flashback scenes. Even as the spacesuits bring a futuristic feel to the film. Visual effects supervisors Richard E. Hollander and Thomas J. Smith do a great job with the minimal amount of visual effects from the look of Rheya‘s body after her accident with liquid oxygen along with look of Solaris itself.

Sound editor Larry Blake does a fantastic job with the sound work to capture the tense yet hollow mood of the space station that plays up to the film’s suspense. The music by Cliff Martinez is superb with its stark, ambient-like piece to play up to the calm yet desolate tone of the film. The soundtrack features a classical piece from Johann Sebastian Bach along with a jazz piece from Thelonious Monk and a piece from the Insane Clown Posse that Snow was listening to.

The casting by Debra Zane is brilliant as it features an appearance from John Cho as a corporate emissary, Shane Skelton as the mysterious boy in the space station, and Ulrich Tukur as Kelvin’s close friend Gibarian who sends him a message to space. Viola Davis is great as Dr. Gordon, the hardened doctor who feels threatened by these strange occurrences as she tries to make Chris see reason and logic. Jeremy Davies is phenomenal as Snow, a quirky crew member who spouts various different things while seemingly very creepy as he has a lot of twitches and such throughout his performance.

Natascha McElhone is radiant as Rheya, Kelvin’s late wife who reappears as a manifestation to Kelvin. McElhone’s performance is truly the highlight of the film as she brings all of the manic issues of a woman on the verge of self-destruction while understanding that she is really just a manifestation of a troubled woman. George Clooney is superb as Chris Kelvin, a man trying to deal with the things that are happening near Solaris only to be haunted by his own dead wife. Clooney brings a haunting quality to his performance as a man seeking redemption as Clooney strips down his charm to play a real man filled with guilt as he has a great rapport with his cast including McElhone.

Steven Soderbergh’s Solaris is an excellent yet eerie film featuring an amazing ensemble cast led by George Clooney as well as amazing technical work. While it may not be as bold or as provocative as the 1972 film by Andrei Tarkovsky. It is still an intriguing adaptation of Stanislaw Lem’s novel as Soderbergh brings a more emotional center to its central characters. In the end, Steven Soderbergh’s adaptation of Solaris is a remarkable sci-fi film that engages its audience into its themes of death and redemption.

This is a hard film to fall into because it gets a little bit more confusing as it goes along, but there's just something here that glued me into this story and kept me watching the whole time. Good Review Steve!

It helped when I saw the original film which I think is much better. Soderbergh's version is a bit more accessible as at first, it's not easy to get into but if you were to watch Tarkovsky's version. It would be easier to understand what Soderbergh was trying to do and more.