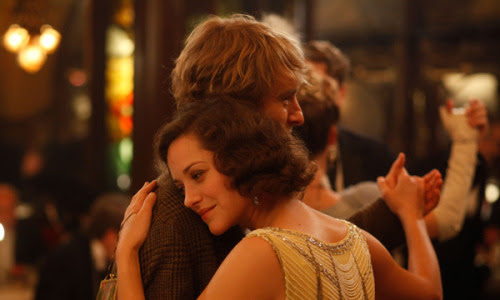 Written and directed by Woody Allen, Midnight in Paris tells the story of a Hollywood screenwriter who goes to Paris with his fiancée as he works on his first novel. Uninspired and feeling left out by his fiancée’s family and some friends, the man suddenly is transported back in time to 1920s Paris. Allen’s first feature set entirely in Paris, the film harkens back to days when things were much different than the Paris of the 2010s. Starring Owen Wilson, Rachel McAdams, Michael Sheen, Marion Cotillard, Kurt Fuller, Mimi Kennedy, Lea Seydoux, Adrien Brody, Kathy Bates, Alison Pill, and Carla Bruni. Midnight in Paris is a fun, exhilarating film from Woody Allen and company.

Gil (Owen Wilson) is a successful Hollywood screenwriter, who is about to marry his fiancée Inez (Rachel McAdams), is trying to work on his first novel. A visit to Paris with Inez’s parents (Kurt Fuller and Mimi Kennedy) has Gil excited, Inez and her parents aren’t thrilled with the city. Gil then meets Inez’s old friend Paul (Michael Sheen) and his wife Carol (Nina Arianda) where they look at the city and sites where Paul always have some intellectual view about the sites, paintings, and various places. Gil feels threatened as Inez goes out Paul and Carol as he takes a walk around the city. When the clock struck at midnight, Gil sees a mysterious car arrive where he is taken to a party where he meets F. Scott Fitzgerald (Tom Hiddleston) and his wife Zelda (Alison Pill) where they later introduce him to Josephine Baker (Sonia Rolland), Cole Porter (Yves Heck) and Ernest Hemingway (Corey Stoll).

Excited by meeting these people and the city itself, Gil wants to take Inez to this mysterious world as she doesn’t seem interested. Gil is then transported back to 1920s Paris where Hemingway introduces him to Gertrude Stein (Kathy Bates) who reads his manuscript while criticizing a painting by Pablo Picasso (Marcial Di Fonzo Bo). It is there that Gil meets Picasso’s current muse Adriana (Marion Cotillard) as he is wowed by his surroundings and Adriana. Gil would continue to make secret trips as during a museum trip with Inez, Paul, and Carol. Paul makes comments about the painting that Gil had saw Picasso worked on earlier where Gil manages to outwit him with the real story about the painting.

With Gil’s fascination towards the city and the past, he meets a young woman named Gabrielle (Lea Seydoux) who shares his love for Cole Porter as Gil makes more trips to 1920s Paris. When he and Adriana go on a night out, Gil meets Salvador Dali (Adrien Brody), Luis Bunuel (Adrien de Van), and Man Ray (Tom Cordier) as they offer him advice about women. With Inez’s dad getting a detective (Gad Elmaleh) to follow Gil, Gil continues to go into adventures with Adriana as he ponders about his own life and desires.

What if a person from the 2010s want to go back to a period when things were different and less complicated? That’s what Woody Allen asks in his film where a Hollywood screenwriter is dissatisfied with his own professional life as he finds comfort in the world of the 1920s. There, he gets to meet his idols and other notable figures where he learns about what to do as a writer and to follow his heart. He even seeks guidance from people from the present such as Gabrielle and a tour guide (Carla Bruni) who shares his love for Paris’ history. Yet, Allen brings a wonderful mix of humor and character study to this story as he creates something that is engaging and lively. A lot of the humor feels natural and fresh where there’s a scene where Gil gives Bunuel the idea of a film whose plotline is similar to Bunuel’s film The Exterminating Angel.

Allen’s script is filled with dazzling ideas about 1920s Paris as well as characters who have different reactions towards Paris. While Inez might not seem like an exciting character who is more interested in socializing and getting fine things for the wedding. She isn’t a total caricature as she is more fascinated by Paul, who is a pseudo-intellectual that really has no true opinions about anything. He essentially says things that he believes are based on facts and tries to make himself seem fascinating when he isn’t. The figures like F. Scott and Zelda Fitzgerald, Bunuel, Man Ray, Dali, Hemingway, Stein, and Picasso are more interesting because of the ideas they offer while some of it is played for laughs.

Allen’s direction is truly his most imaginative work as a director in many years. Allen just doesn’t go for this tourist idea of Paris but show the audience the kind of beauty it has whether it’s sunny or rainy. Whether it’s day or night, he sees things as if he’s Gil who is just enamored with Paris itself. Paris in its present time and the past is a character that is truly a joy to watch. Allen allows the camera to soak in the atmosphere of the city while creating some amazing shots and scenes that really brings something magical to this film. Overall, this is Allen at his best and certainly his most intoxicating film since his work in the 1980s.

Cinematographer Darius Khondji, along with Johanne Debas, does some amazing work with the photography from the gorgeous sunny look of Paris in the summer along with its look on a rainy day. The nighttime exteriors of Paris are also exquisite including the interiors at Stein’s home and the bars where the look is truly timeless. Khondji’s camera work is among one of the film’s technical highlights for the way he brings an old-school look to the fantasy of 1920s Paris. Editor Alisa Lepselter does some excellent work with the editing as she creates a wonderful opening montage of Paris in various locations and weather conditions. For the rest of the film, Lepselter keeps the editing straightforward along with some rhythmic cuts for some of the fun elements of the film.

Production designer Anne Siebel and set decorator Helene Dubreuil do a great job with the look of 1920s Paris that includes a wonderful merry-go-round and other objects. Notably the cars of the time that Gil rides on to the parties as the art direction is spectacular for its mixture of modern Paris and Paris of the past. Costume designer Sonia Grande does some fantastic work with the costumes from the clothes that Gil wears to the modern dresses that Inez wears. Yet, it’s the 1920s costumes such as the dresses that Zelda Fitzgerald and Adriana wear that are very lively along with the ragged look of Ernest Hemingway. Sound editor Robert Hein and mixer Jean-Marie Blondel do some wonderful work in capturing the raucous world of 1920s Paris along with atmosphere of the locations in modern Paris. The film’s music soundtrack is a wide array of music ranging from the songs of Cole Porter to 1920s jazz and rag time along with the serene music of Paris itself.

The casting by Stephane Foenkinos, Patricia Kerrigan DiCerto, and Juliet Taylor is definitely a major highlight of the film they created what is truly a superb ensemble cast. In small appearances as various famous individuals, there’s appearances from Sonia Rolland as Josephine Baker, Vincent Menjou Cortes as Henri de Toulouse-Lautrec, Olivier Rabourdin as Paul Gauguin, David Lowe as T.S. Eliot, Tom Cordier as Man Ray, Adrien de Van as Louis Bunuel, Yves Heck as Cole Porter, and Marcial Di Fonzo Bo as Pablo Picasso. Adrien Brody is very funny as Salvador Dali who keeps talking about the tears of rhinos when giving advice to Gil about women and art. Corey Stoll is really good as Ernest Hemingway who gives Gil advice about writing and the guts anyone should take into living life to the fullest.

Other notable small performances include Carla Bruni as a tour guide who helps Gil in translating a book, Gad Elmaleh as a detective hired to see where Gil is going, and Lea Seydoux as a young woman who shares Gil’s love for Cole Porter. Tom Hiddleston is great as F. Scott Fitzgerald who helps Gil with the ideas of writing while Alison Pill is phenomenal as the lively yet melodramatic Zelda. Kathy Bates is wonderful as Gertrude Stein who helps Gil with his book while arguing with Picasso in French about his painting. Nina Arianda is very good as Paul’s wife while Kurt Fuller and Mimi Kennedy are funny as Inez’s conservative parents.

Michael Sheen is brilliant as the intellectual douche-bag Paul who always spouts ideas and supposed facts to make him seem like he’s really smart as Sheen brings a slimy wit to a character that is truly a smart-ass. Rachel McAdams is excellent as Inez, Gil’s fiancée who wants to go out to clubs unaware of Gil’s struggles to write a novel as she becomes more fascinated by Paul. Marion Cotillard is radiant as Adriana, a muse of Picasso who falls for Gil as she shows him the world of art while giving him some perspective about the 1920s. Finally, there’s Owen Wilson in what is definitely his best performance as the wannabe novelist Gil. Wilson brings a wonderful charm to a guy unsure of his life and career only to find inspiration in Paris in its past and present while being enamored by Adriana and the people she’s with. It’s definitely Wilson at his funniest and liveliest in what is truly an outstanding performance.

After a period of some excellent films, good films, OK ones, and a few bad ones in the past 20 years, Midnight in Paris is definitely Woody Allen’s best film in more than 20 years. With a great ensemble cast featuring Owen Wilson, Marion Cotillard, Rachel McAdams, Michael Sheen, and many others. It’s a film that is very exciting, entertaining, funny, and also extremely imaginative about a man going back to 1920s Paris and meet the famous people of those times. For longtime Allen fans, this film is a truly magnificent work as it proves that he’s still got it. Even as it goes up there with some of his best work in the 70s and 80s proving that despite some uneven work over the years, he’s still got some ideas left. In the end, Midnight in Paris is a triumphant film from Woody Allen.

Glad you liked this Steven. What a wonderful surprise given Allen's mostly forgettable fares for the past decade (and more). And this contrast with The Hangover 2 of the world as a smart, literate, charming comedy.

I didn't like this. I loved it. In fact, I watched it pretty early in the morning that was later followed by X-Men: First Class.

I just fell in love with the whole movie and was engaged by the story and the performances. I walked out of that screening with a smile on my face. People need to see this because not only is it funny but it has characters that are lively and witty. This is definitely going to be in the list of my favorite Woody Allen films of all-time.

Indeed, I actually to see it a second time yesterday. It's definitely going to be up there as one of my favorite movie of the year.

If The Tree of Life hadn't come out this year, this film would be the film of the year, so far.

Looks great, thanks for the review. Though I always find myself only reading your first and last paragraphs in fear of spoilers.

@Bonjour-I try not to spoil anything for the readers. The summary is only for anyone interested in what it's about. I try not to reveal too much. Yet, if you're into smart comedies that is set in Paris, see this.