Originally Written and Posted at Epinions.com on 10/13/07. 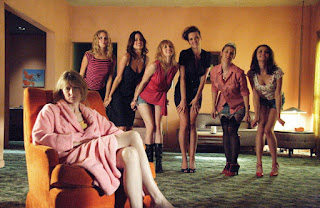 2001's Mulholland Drive brought David Lynch his most acclaimed and successful film to date that included Best Director nomination at the Oscars and sharing the Best Director prize at the 2001 Cannes Film Festival with Joel Coen for The Man Who Wasn't There. Following the film's success, Lynch took a break to work on various, experimental side projects, supervising the releases of his films on DVD, and other ventures. During this time as digital filmmaking was the new thing, Lynch took notice as his he used digital video for a few of short, experimental projects. The result of the experiments gave Lynch the idea for his next feature-film which was a return to his love of experimental films in the 2006 film INLAND EMPIRE.

Written, directed, produced, shot, edited, and sound designed by David Lynch, INLAND EMPIRE is a three-hour experimental film that emphasizes Lynch's love for the unconventional while doing the film entirely on digital video. Yet, the film Lynch describes is that it's about a woman who is in trouble. The main plot though is about an actress who is working on a film in Europe whose perception of reality is altered into a different world. Shot in parts in Los Angeles to culminate a film trilogy that began with 1997's Lost Highway and 2001's Mulholland Drive, the film conveys the eerie world of Los Angeles, which has become Lynch's adopted home. The film also marks a long-awaited reunion between Lynch and actress Laura Dern who starred in 1986's Blue Velvet and 1990's Wild at Heart as she plays the film's leading role.

When a neighbor (Grace Zabriskie) decides to meet with actress Nikki Grace (Laura Dern), Grace reluctantly invites her where the neighbor says some strange, cryptic things that would haunt Grace. After years of not getting big projects or any material that she would love to work on, Grace finally gets a big film part working with a guy named Devon (Justin Theroux) and under the direction of a man named Kingsley (Jeremy Irons). Though Nikki and Devon managed to be great friends, Devon receives warning to not embark on an affair, particularly due to Nikki's Polish husband. When rehearsals for their new film begins, Kingsley along with his assistant Freddy (Harry Dean Stanton) reveal that the film they're making is a remake of an unfinished film.

Rehearsals go fine until Nikki sees someone as she and Devon eventually learn about mysterious things concerning the original, unfinished film. Things start to go well during rehearsal as Nikki plays a woman named Sue and Devon plays a man named Billy. Yet, as filming progressed, the world of reality and fiction start to blur where Nikki begins an affair with Devon but in the name of their characters. Suddenly, Nikki notices that she starts to see things in her character Sue. Then one day when Nikki goes grocery shopping, she finds a symbol and enters a door where she's taken to a strange, dark reality. Suddenly, she's Sue as she finds herself in parts of Poland and another part of Los Angeles where she's now living in an apartment with prostitutes.

Sitting in the apartment, she also finds herself having conversations with a man named Mr. K (Erik Crary) as the conversations get stranger and stranger. Eventually, living with the hookers start to take its toll as they often break into choreographed dance numbers where she finds herself stuck in the world. Finally, she finds Billy and have a confrontation with his wife (Julia Ormond) as the world starts to get stranger. Now a hooker, Sue tries to find out about the young woman (Karolina Gruszka) who is watching her from the TV where suddenly, Nikki would return to enter strange worlds including a sitcom called Rabbits while trying to save the life of this young woman.

The film's plot line is simple which is about a woman in trouble. Yet, the plot line isn't simple as it seems. Even from a mind as surreal and loose as David Lynch. The film starts off with a black-and-white shot of record playing and a crying young woman watching Lynch's 2002 online sitcom Rabbits. A lot of these things plus subplots involving Eastern European crime world are thrown in to break from the film's main plot. Yet, the result is Lynch definitely rallying against convention. Whether's it's a traditional film narrative, satire, or anything that's traditional with any kind of films. Lynch is basically throwing away all of these ideas.

Serving as the writer, director, producer, editor, cinematographer, sound designer, and music composer along with cues by Krzysztof Penderecki. The film is definitely Lynch taking control of everything with additional contribution from cinematographer Peter Deming on lighting cues and George Koran on digital coloring. More importantly, Lynch abandons the idea of shooting on film and replacing it with digital video. A lot of the interiors Lynch shoots is almost in a Dogme 95-like fashion where it's all hand-held and in natural lighting most of the time. It's also very stylized through his eerie direction. While the look does have a grainy film on the film's exterior sequences, they work to convey the atmosphere Lynch is conveying. Even as he's improvising along the way since he did the film without a completed script and things are made up along the way.

That sense of improvisation and spontaneity really adds a fresh style to the film though it's Lynch experimenting. Not everything Lynch does work as the pacing at times tends to lag. Even in a film that is three hours where it tests the audience patience. Things get repetitive and meanders a bit. Yet, it's part of what Lynch is trying to do with the film because of his themes of reality versus fiction. In many ways, Lynch is going back further to the days of his debut film Eraserhead 30 years before to return to his love of experimentation. Even through its grainy, digital photography and stylized, ominous editing, and eerie sound design with help from sound editor Ronald Eng. Lynch is definitely trying to create new things that audiences who want to see something new will enjoy.

Despite these experiments and Lynch being unconventional, the film still has a story and the story about a woman in trouble is definitely told. Though the narrative is told in an unconventional manner, the main story of Nikki/Sue entering into a strange world to understand. Yet, the audience is also being played on whether she's in a film within a film or is she in a different reality. It will confuse people but the elements of horror and mystery manages to make the whole experience into an incredible yet strange journey.

The film also has a parallel story of this young Polish woman in trouble as she is held by Polish crime lords while forced to watch things like the Rabbits sitcom and is playing what may be the observer. A lot of things Lynch is saying isn't easy to interpret and is definitely a mind-bender. Yet, the result of what Lynch is trying to do and how to present things through his loose script and eerie, surreal direction proves that he's still got something to say and is managing to challenge himself as a storyteller.

Helping Lynch with his presentation is set decorator Melanie Rein and a team of art directors to bring different looks of Los Angeles from the posh world that Nikki lives to the decayed world that Sue lives in. Costume designers Karen Baird and Heidi Bivens brings a unique look from the varied clothes of the hookers to the posh-like clothing of Nikki/Sue. Lynch's score is mostly electronic driven to convey the sense of horror and suspense. The music of Krzysztof Penderecki also adds some suspense with his orchestral score that also features music from Nina Simone, Little Eva, and Etta James to add quirkiness to the film's soundtrack.

The film's cast is very unique and diverse with several cameo appearances from Lynch regulars like Diane Ladd as a talk-show host, Grace Zabriskie as a neighbor, Harry Dean Stanton as Kingsley's assistant Freddy, Laura Harring, Scott Coffey, and Naomi Watts appearing as voices in the Rabbits sitcom with Harring appearing at the end of the film. Other cameos include William H. Macy as an announcer, Mary Steenburgen as a visitor, Terry Crews as a homeless man, Ben Harper as a musician, Nastassjia Kinski as a friend at the end of the film, and Jordan Ladd as one of the hookers who does a dance routine in front of Sue. Karolina Gruszka is great as a crying young woman who is in trouble while Polish actors Jan Hencz and Krzysztof Majchrzak are great as Polish mob members with Peter J. Lucas as Nikki's troublesome husband. Julia Ormond is great as Billy's troubled wife Doris, Cameron Daddo as Devon’s manager, and Erik Crary as the eerie Mr. K.

Jeremy Irons is great as film director Kingsley Stewart, a director who hopes to do a remake justice while trying not to be cursed. Irons is perfect in the role of the director as he tries to make sure Nikki is in acting mode where as if she's fully in character. It's a great performance from Irons who rarely gives a bad performance. Lynch regular Justin Theroux is in excellent form as Devon Berk, an actor who is very friendly with Nikki and wants to maintain his professionalism. In the role of Billy Side, Theroux sports a Southern accent and acts like a man in love and is very desperate about his love for both Sue and Doris.

Laura Dern gives what has to be one of her greatest performances to date. Dern manages to be very charming and likeable in the role while delving into darker material. When she's Nikki, she carries the sense of optimism as an actress who's been out of the spotlight for a while and is given a chance to shine again. In the role of Sue, she has to dig deeper into figuring out what world she's in while wondering if everything she's seeing is real. Dern has to delve into other acting genres for the performance and it works in every level whether it's mystery or horror. It's a very complex, superb performance from Laura Dern who is being overlooked nowadays among her acting peers.

While INLAND EMPIRE isn't a great film that one would expect from David Lynch. The film is still an experience that is unparalleled with most feature films. Fans of Lynch's more experimental side will no doubt enjoy his new feature film as well as his attempts to break the rules. Fans of Laura Dern will also enjoy this for her brave, complex performance. Anyone who wants to be challenged by unconventional filmmaking should see this film. Yet, for a mainstream audience, this film is not for them. With its three-hour running time, pacing issues, and such, it's a film that they won't necessarily enjoy. In the end, INLAND EMPIRE is a surreal yet provocative film from David Lynch and company.