Originally Written and Posted at Epinions.com on 6/17/09 w/ Additional Edits. 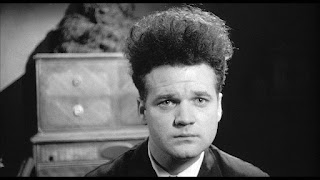 One of cinema's most original and certainly weirdest directors in the world, David Lynch is a filmmaker who makes films that are often filled with surrealism and an eerie view into the world he is surrounded by. Yet, before he would make such classics as The Elephant Man, Blue Velvet, and Mulholland Dr. Lynch was just a young art student interested in film where at a Boston arts college, he roomed with future J. Geils band vocalist Peter Wolf. After relocating to Pennsylvania in 1966, he made his first short film Six Men Getting Sick while finally getting some attention from the American Film Institute in 1970. At the AFI, Lynch would create a film that would take him five years to make from 1971-1976 with a $10,000 budget that finalized into $20,000 with funding by his childhood friend in production designer Jack Fisk and Fisk's wife Sissy Spacek for the 1977 cult film Eraserhead.

Written, produced, edited, and directed by David Lynch, Eraserhead tells the story of a young printer who goes on vacation where he learns that his estranged girlfriend has given birth to a deformed, reptilian baby. In his hopes to take care of the baby, the young man becomes insane as his girlfriend leaves him while he starts to have bizarre visions. A film that revels in Lynch's world of surrealism while also being a horror film of sorts. It's a film that would be the start of many things to come from the great director. Starring Jack Nance, Charlotte Stewart, Jeanne Bates, Allen Joseph, Judith Anna Roberts, Laurel Near, and Jack Fisk. Eraserhead is an eerie, intriguing, and truly original film from David Lynch.

On vacation from his job as a printer in a factory, Henry Spencer (Jack Nance) receives a phone call from his estranged girlfriend Mary X (Charlotte Stewart) to attend dinner with her family. At the dinner with her parents, Henry learns that Mary had given birth to a premature, reptilian baby where her mother (Jeanne Bates) kept asking if he impregnated Mary as Henry is confused. Henry reluctantly helps Mary take care of the baby where they live in his one-bedroom apartment. Yet, the baby's whining forces Mary to not sleep as she leaves the apartment to get some sleep at her parent's house. Henry takes care of the baby as he learns that it's sick where he tries to help it. Then comes a series of bizarre visions including a man in a planet (Jack Fisk), a lady in a radiator (Laurel Near) who sings and dance while sporting huge, grotesque cheeks, and a strange visit from his beautiful neighbor (Judith Anna Roberts) where he had a sexual liaison with.

Things get even stranger in his dreams where a boy brings a head to a pencil factory as Henry finally wakes up. With visions between fiction and reality blurred, the baby starts to laugh at him mockingly where Henry decides to take action but at the expense of his own mind.

The film's plot description about a man who tries to take care of a little reptilian, deformed baby with its head sticking out of a tiny body only to endure surreal visions is essential what the film is. There's no traditional plot while the dialogue in the film is very minimal for an 89-minute film since there's really about nearly 20 minutes of it in total. While conventional audiences might be dismayed by its unconventional style, it works because it's all about sound and the visions that Lynch presents. Even as it delves into Lynch's world of surrealism with strange visions including moving creatures in stop-motion animation, a reptilian baby's head, and all of these things that are bizarre and unreal.

The direction that Lynch creates is truly mesmerizing as the film starts with no dialogue for nine minutes straight until Henry briefly talks to his beautiful neighbor about a phone call. Something like this could've been done in a slow, tedious pacing but Lynch using lots of weird images as it is shot in black-and-white maintains a nice, pacing feel. Lynch as the editor definitely creates a nice pacing that is more straightforward but also uses style to move from one weird transition to another. Being the visual effects artist and art director, the look of Henry's apartment is shabby yet weird as it is filled with plants and a radiator. All of which play up to Henry's troubled state of mind as its surreal images which involves a grotesque young woman singing and dancing while stepping on some dead creatures. A man inside a planet doing things and all other weird things.

What is more amazing is that this film came out in March of 1977, a few months before Star Wars was released that would usher the big blockbuster era of American cinema. Imagine this particular film coming out around the time Star Wars, Saturday Night Fever, Annie Hall, and other American films that year were coming out. This would be the film that would surely be something totally out of place as it's something mainstream audiences would be baffled by while art house audiences would be unsure what they're seeing. What David Lynch did with this film is truly original and fascinating as he creates a hell of a debut film that would be unmatched in the years to come.

Cinematographers Herbert Cardwell and future Lynch collaborator Frederick Elmes do amazing work with the film's black-and-white photography in its striking visuals including some blinding lights and some special effects shots by Elmes filled with dazzling effects including dust and the iconic shot that would be the film's theatrical poster. Another of Lynch's key collaborator who would be prominent in later films is sound editor Alan Splet. Along with Lynch on sound effects, the sound work is truly amazing from the sounds of clanging, hollow winds, and other noises as the sound work is just amazing. Even in adding a level of suspense and horror to the film while the little music that is used is range from tingling, carnival sounds to a dreamy ballad that would serve as a precursor to Lynch's other films in the years to come.

The casting is phenomenal with some memorable small roles from the likes of Gill Dennis as a date of Henry's neighbor, David Lynch's daughter Jennifer as a little girl playing around, Hal Landon Jr. as a pencil machine operator, T. Max Graham as the pencil factory boss, Thomas Coulson as the boy who finds a detached head, Darwin Joston as a pencil factory clerk, Jean Lange as Mary's catatonic grandmother, and legendary production designer Jack Fisk as the man in the planet. Allen Joseph and Jeanne Bates are good as Mary's crazy parents while Laurel Near is really good as the grotesque lady in the radiator. Judith Anna Roberts is excellent as the sexy woman who lives across from Henry who seduces him in a dream while Charlotte Stewart is great as Mary, Henry's troubled ex-girlfriend who can't deal with the noises in his apartment.

Finally, there's the late Jack Nance in what is truly a mesmerizing, haunting performance as Henry Spencer. Nance, who would be one of Lynch's regular actors until his final appearance in Lost Highway in 1997, is great in his physical acting in the way he stands and be still while not saying a lot of words. There's a creepiness to him while his memorable hairdo is definitely something that will never be replicated in cinema. Though his career, aside from his work with Lynch, may be relegated to character actor roles, Jack Nance will always be remembered for this entrancing yet brilliant performance as Henry Spencer.

Eraserhead is truly a film of its kind from director David Lynch. Fans of cult cinema and horror will no doubt see this as one of the most original films ever made while for David Lynch fans. This film serves as a great starting point for those interested in the director as it truly rank with such classics as The Elephant Man, Blue Velvet, and Mulholland Dr. While it's not an easy film to watch as it's filled with suspense, surreal images, and lots of horrifying special effects. It's a film that is guaranteed to shock and literally fuck with the mind. So in the end, anyone that wants to watch something late at night that will bring nightmares and surreal images. David Lynch's Eraserhead is the film to go see.